This episode begins immediately after the conclusion of the first episode and chronicles the first night that our new-found family stays together under one roof.   At the opening we find Jesse and Joey changing Michelle.  For about 2 seconds it seems like they’re actually starting to show signs that they might not accidentally kill these children at any moment, but then they dress Michelle up for bed by tying her up in clothes.  Danny comes in and is surprisingly jovial about finding the two men he’s put in charge of his children’s safety and well-being completely unable to perform the most basic childcare tasks.

Next we find Uncle Jesse in his new room, putting up Elvis posters.  That’s right, Uncle Jesse really likes Elvis.  You might have thought that his entire character was limited to his love of motorcycles, guitar, and poo-na-na, but there’s a deeper level to Uncle Jesse that you didn’t foresee.  He also loves Elvis.  While he’s busy putting the last piece of the Uncle Jesse personality puzzle on display, Stephanie barges into his room, not giving one shit whether or not he was previously engaged or at all unwilling to entertain her.  She immediately lays on a guilt trip that disallows Uncle Jesse from covering up the pink bunnies that wallpaper his room.  You see, back when it was Stephanie’s room, her mom painted those pink bunnies for her.  Now that her mom is dead she can’t even think about painting over those bunnies without crying big manipulative tears.  So unless he wants to shit all over a little girl’s fleeting relationship with her dead mother, he has to live in a room with pink bunnies all over the walls.  That’s how shit goes down in the full house. 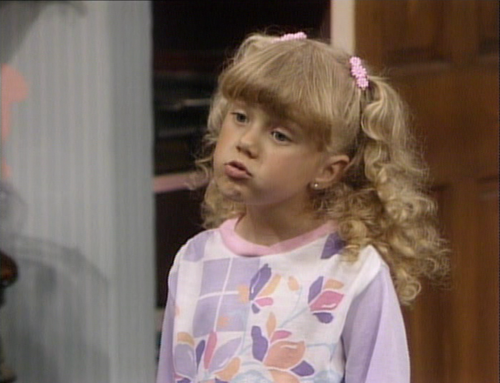 All the grown-ups are then forced to take turns telling a bedtime story to the girls.  All of their contributions to the story suck in their own special way, but the most baffling part is when Joey gets a big laugh-track reaction from mentioning Slurpees.  I realize that none of the jokes on Full House are funny, but how is mentioning Slurpees even a joke?  Anyway, once the kids are in bed, everyone wants to get out of the house real bad.  Naturally, only Danny realizes that they can’t leave the kids there by themselves and decides that Jesse has to stay home because his band practice is somehow less important than Joey’s unpaid appearance at a local comedy club.  This decision is baffling to me.  Joey clearly sucks at comedy more than Jesse sucks at music, and Jesse sucks pretty bad at music. 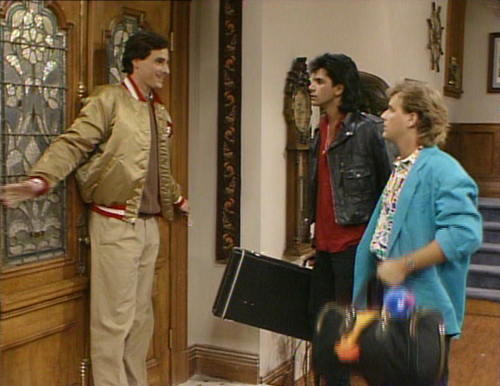 So naturally, once he’s left alone, Uncle Jesse lets the girls stay up late eating junk food and even has his incredibly stylish band over for practice.  Danny comes home and totally bugs out, which is actually pretty understandable.

Jesse takes the blame for everything, even the ice cream eating, which was the kids’ idea.  The ensuing conflict is put on hold when the baby is heard crying upstairs.  She’s teething, and apparently the only way to calm her down is for Uncle Jesse to stick his finger in her mouth.  I’m putting that one out there, but I don’t have anything to say about it.

After he’s calmed down a little, Danny goes into his daughters’ room to talk about how irresponsible Uncle Jesse is.  He finds some empty ice cream containers in their room and comes to the realization that eating junk food was the girls’ idea.  I’m not really sure how the presence of the ice cream containers clarifies whose idea it was to eat it.  I’m also a little confused as to why it matters.  One way or another, when Danny came home from work at midnight, his daughters were dancing to live music in the living room.  Regardless of logic or reasoning, Danny ultimately decides that the girls have to apologize to Uncle Jesse, so they go into his room and have a heartwarming conversation cued by the music.  Ah, the music…

You might think that you’ve had enough family fun by this point, but Jesse and Danny still have to have a heart-to-heart of their very own.  Their conversation is pretty heavily laced with marriage innuendos, and it totally looks like they’re going to kiss the whole time.  Since Danny already looked like he was gonna kiss his mom last episode, I’m actually starting to think that looking at people like he’s gonna kiss them is just his acting method for conveying sincerity.

Incidentally, the music doesn’t come on during this conversation, presumably because we already heard it in the previous scene.  I’m not sure if there are rules to the music, like if there’s a once-per-episode limit or what.  I’m pretty sure it’s used in every episode, though…  I’ll be sure to keep track of this as things progress…

Anyway, Jesse and Danny make up, and then there’s a conga line.  The end.