DJ passes up going to the church bake sale with Kimmy Gibbler because she’s anxiously awaiting the arrival of her cousin, Steve.  Her description of their time together is oddly suggestive:  “we go ice skating, we mess around… we have so much fun, it’s like we’re not even related.”  As if on cue, Steve arrives at the door and is revealed to be none other than Kirk Cameron, best known for his role as Mike Seaver on Growing Pains, who also happens to be the real life brother of DJ/Candace Cameron. 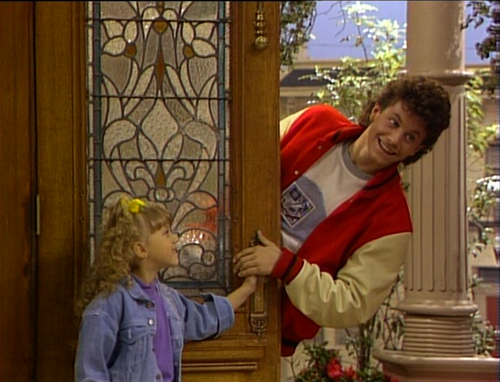 I’m assuming he agreed to make this guest appearance to help boost the ratings of his little sisters piece of shit show.  At this time he was at the height of his career, well before he became a raving Jesus freak and alienated pretty much everyone in show business.  That’s right, unlike his sister, Kirk Cameron would never miss a church bake sale.  But I digress…

Kimmy Gibbler is immediately overwhelmed with sexual feelings towards Steve. 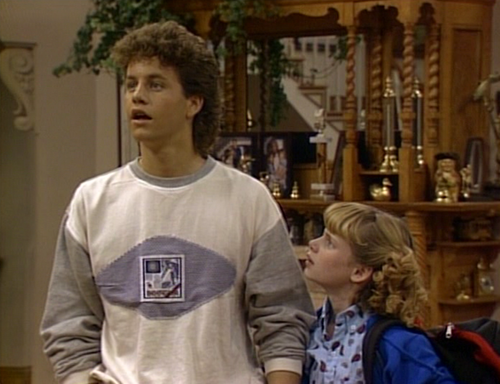 Danny congratulates him on receiving a baseball scholarship to Stanford.  The Uncles enter the living room to greet him and Jesse is eating fried chicken for no reason, just like he did in the previous episode.  What an odd trait… 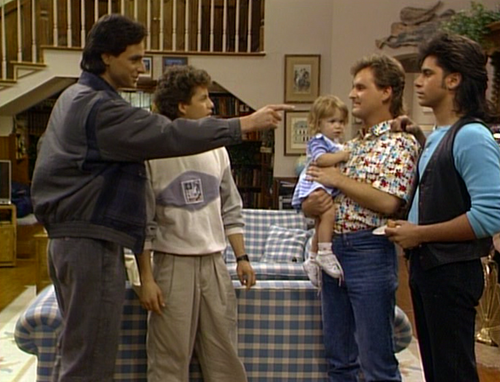 Anyway, Steve passes up going ice skating with DJ so he can play basketball with the Dads, all of whom are suddenly overwhelmed with sports hysteria. 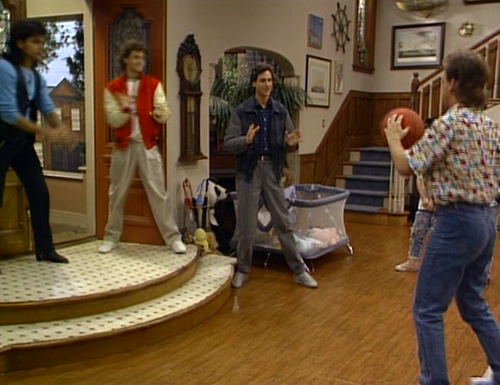 When the guys return to the Full House they immediately sit down to watch a basketball game.  Kimmy Gibbler makes further sexual advances towards Steve and DJ clamors for his attention by showing off her new jeans.  OH MY GOD WHAT IS WRONG WITH HER JEANS???

Even a late 80’s fashion faux pas isn’t enough to steal Steve’s attention away from sports, but DJ finally gets some time alone with him when she agrees to help him change the baby.  He blows her off when she tries to make plans for the week with him but there’s some consolation in the two of them being invited to a family trip to the park the next day.  That’s not good enough for DJ, though, who expresses her feelings of rejection to the baby.

The family all play touch football in the park the next day.  Kimmy Gibbler uses the game as an excuse to slap Steve on the ass like 3 times.

Throughout the game, DJ’s behavior grows more aggressive, culminating in her tackling Steve. 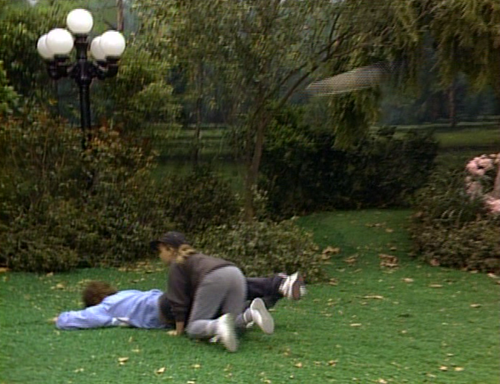 DJ gets all emotional when she’s penalized and Kimmy Gibbler uses the incident as an excuse to slap Steve’s ass again.  She should go to jail for that!  Danny finds DJ on a park bench and gives her the “I want to kiss you look” that he uses to express sincere emotion. The music comes on as he explains to her that Steve’s Dad cut out on him last year and he needs some male-bonding time. 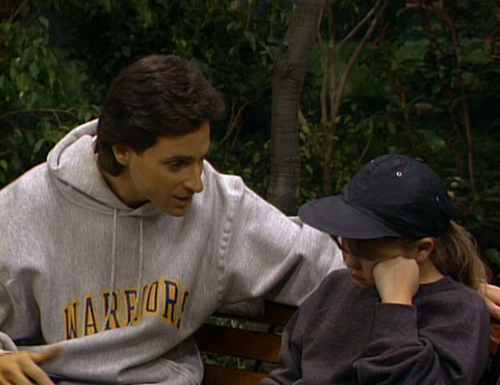 Surprisingly, the conflict is not resolved at the end of this scene, which is the first time the music has failed to deliver us to a touching conclusion…

But wait!  In the very next scene, Steve comes to DJ’s room and they talk about her feelings and then everything is fine.  End of story.

I’m really getting annoyed with all of these episodes that focus on a new character that we’ll never see again.  The regular cast is so painfully 1-dimensional that you’d think the writers would make some effort to flesh them out, or, failing that, they’d at least bring back one of these new characters so that the episode they’re featured in isn’t a complete waste of time.  At least in this case they used a quasi-famous guest star to make it slightly more excusable.  Maybe it was sweeps week or something?

Firsts:  Cousin Steve, The music does not solve everything