Pre-Credits Gag:  As Joey naps on the couch, the baby comes in and licks him.

At a horse ranch, Jesse shows Michelle a baby chicken while Rebecca Donaldson watches.  Jesse is clearly trying to lure Rebecca in with his paternal instincts, giving her a look that suggests that they could have ugly, obnoxious twins of their own some day.

Rebecca asks the meta question of, “what are you doing here” and it’s explained that Wake Up, San Francisco is doing a special Saturday episode about this horse ranch and the girls wanted to see it being filmed so the Uncles are there watching, too.  I don’t really know why a farm is worth a special Saturday broadcast.  I guess they needed a reason why the kids weren’t in school.

Since she’s not in school because it’s Saturday, DJ is at the right place and time to get all obsessed with a horse.  As she ogles a fine equestrian specimen named Rocket, the creepiest guy ever to appear on this show saunters over and offers to let DJ adopt the horse for the modest fee of $100 every two weeks.  Just looking at that guy, you can tell he reeks of gin.

Anyway, DJ cooks up a scheme to go halves on the horse with Kimmie Gibbler, who suddenly appears at the ranch for story purposes. DJ then tries to gauge the likelihood that Danny will pay for the horse by asking the more general question of whether or not she can get a pet.  He doesn’t seem all that into the idea and cautiously suggests she pick a small, low maintenance pet and then all of a sudden they all realize that they’re being filmed for the show.  You’d think that there would be some sort of film crew for Wake Up, San Francisco that prevented things like that from happening.  Also, would they really let the whole family come down and just stand around while the show is filming?  I don’t remember ever seeing Regis Philbin’s family gawking in the background of his morning show.  Wake Up, San Francisco seems about as shoddily produced as Full House itself.  We’ll forgive them this time, though, because at the end of the scene we get to see Danny dressed in overalls milking a goat.

Later, back at the full house, DJ sits in her room and obsessively stares at pictures of horses.  Kimmie comes over and says that her mom totally refuses to pay for the horse.  DJ concludes that if they can make the first payment themselves, they can secretly own the horse for the first 2 weeks and then their parents will be so impressed by their responsible behavior that they will buy them the horse.  Yeah, that makes perfect fucking sense.  Stephanie walks in on the two of them chanting, “we’re gonna get a horse,” and becomes an accomplice to their scheme.

Jesse makes another attempt to get into Rebecca Donaldson’s tight ass jeans but she deflects him yet again, claiming that she has to focus on work right now.  She then says that she really likes having him as a friend, which we all know is a polite way for a woman to say that she will never fuck you.  Dang, she was lookin pretty good in that cowgirl outfit, too…

DJ and Kimmie go to the ranch after making their first payment on the horse.  Kimmie seems pretty uninterested in the horse outside of bragging at school about it, but DJ is full on horse obsessed.  There is a painful montage of her riding and grooming the horse set to an unbelievably bad cover of, “Good Day, Sunshine.” 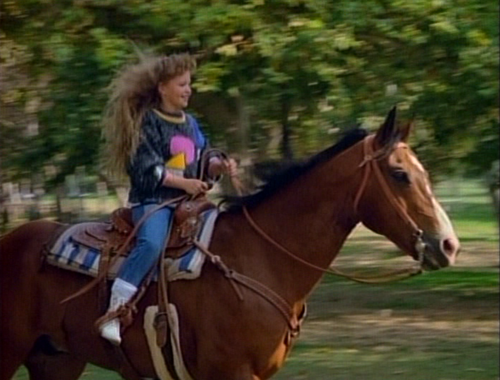 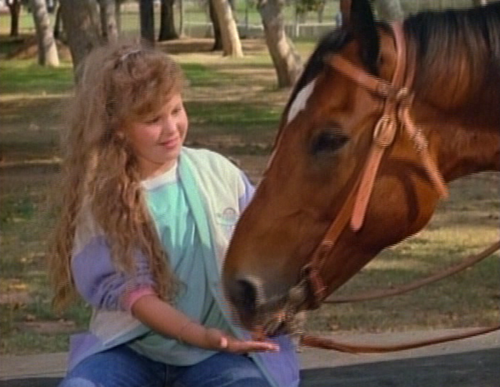 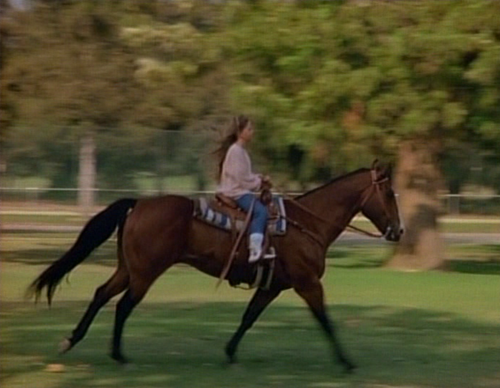 What’s up with all of the terrible Beatles covers on this show?  It’s like they have the rights to The Beatles library of music but they hate it or something.  Anyway, after the montage, some helpful expository dialogue from DJ makes it clear that the first two weeks of horse ownership have passed and their next payment is due.  On that note, Kimmie Gibbler comes in wearing a badass new outfit and totally unapologetically declares that she’s not ready for the responsibility of making biweekly horse payments.  I like how Kimmie Gibbler treats DJ really shitty.

After Kimmie Gibbler abruptly exits, the disgusting weirdo ranch hand stumbles in and asks for his money.  DJ says that she’s short of cash but offers him a George Michael CD to cover the difference, which doesn’t work out for some reason.  I bet if she’d offered some home brewed moonshine it would’ve been a different story.  As he saunters away, barely maintaining his balance, she asks the old ranch hand if she can take the horse out for one last ride and he says why not? 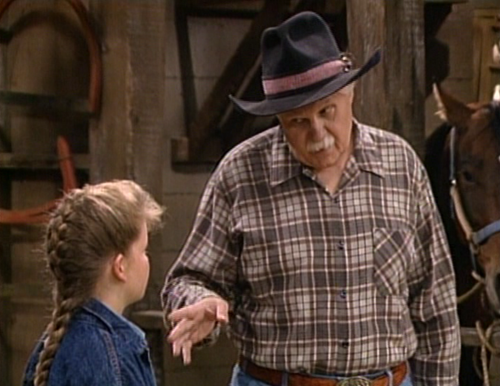 Meanwhile, back at the full house, Stephanie plays in the kitchen with her little Asian friend, Harry, who I remember being a reoccurring character on this show.  I’m not sure how long he sticks around for but I know we’ll see him at least a few more times.

Anyway, Stephanie goes into the living room to find DJ after Uncle Jesse conveniently asks her to.   Stephanie unexpectedly finds that DJ has stolen the horse and brought him into the living room.  DJ says that as soon as Danny sees the horse she’s sure that he’ll be willing to buy him, but only if they can get him in the backyard first.

Ok, what the fuck?  First of all, why the fuck didn’t DJ ever even ask her dad if he’ll pay for the horse?  She never even mentioned the horse to him one time.  Second, and more importantly, getting the horse into the backyard is just a pointless device in order to create a bunch of wacky interactions.  Is it really that important to get the horse into the backyard?  Isn’t the real issue here that DJ stole a fucking horse?  Finally, how did she get the horse home from the ranch?  Are we to assume that she rode him through the street of San Francisco?  I mean, what the fuck?

So Stephanie tries to distract Uncle Jesse so DJ can sneak the horse into the backyard but Jesse keeps hearing cheap stock horse sounds coming from the living room and quickly discovers the situation.  Soon Joey gets involved too and then everyone agrees that it’s really important to get the horse into the backyard before Danny gets home.  Naturally, Danny comes home that minute and it’s just so darn wacky when the Uncles try to stop him from discovering the horse.

So of course Danny can’t be shielded from the fact that there’s a big ass horse in his living room and he gets all pissed at DJ.  He sends her to her room and they have a very important talk and the music comes on.

DJ says a tearful goodbye to her horse but then it turns out that Rebecca Donaldson bought him so DJ can still ride him and stuff.  It’s not like we’ll ever actually see this horse on the show ever again, but it’s nice to know that he’s still around.  DJ says, “I love you” to the horse and then we get a brief reprisal of that horrible Beatles cover while DJ rides the horse in slow motion over the credits. 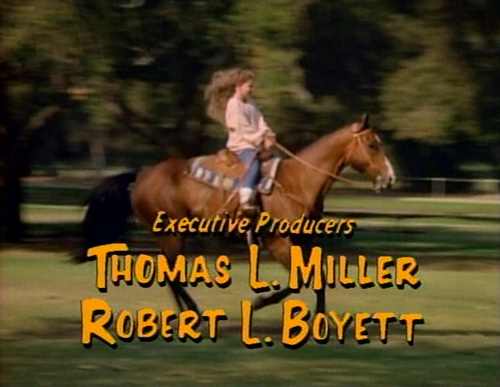 Seriously, what was up with that ranch hand?  Where did they find that guy???