Pre-Credits Gag:  Jesse tries to discourage the baby from eating with her hands but she does it anyway.  For some reason they’re wearing matching outfits in this scene.

It’s Valentines day and the full house is all aflutter.  Jesse’s planning the best V-day ever for Rebecca Donaldson so he buys her some fancy earrings and anal beads.  The girls are anxious to receive their gifts from Danny even though Valentines day isn’t really the type of holiday where your parents buy you gifts but whatever.  DJ goes on and on about wanting a “royal blue sweater.”  I’m not sure if that’s a brand name or a color or what, probably because I’m not too hip on early 90’s fashion (not that this show is, either) but anyway she gets it.  Stephanie tries the sweater on and DJ flips out and calls her a “nerd bomber” and a “chicken wing.”  Stephanie retorts by calling her a “double-decker lameoid chicken sandwich” which is pretty awesome but not as cool as if they’d gotten into a fist fight.

Danny tries to resolve the conflict by forcing them to say something nice about each other even thought that’s got to be the most resentment-inducing conflict resolution tactic a parent could ever come up with.  Seriously, why doesn’t he just make them resolve their conflicts with fists.  I’d give anything to watch that.  I’ve been watching this fucking shitty show every week for almost a year now and I’m so desperate to watch any one of these people bleed out of their face that it’s not even funny.

As Stephanie shares her collection of valentines with Mr. Bear, DJ comes home and confides in her that her new sweater got completely destroyed. 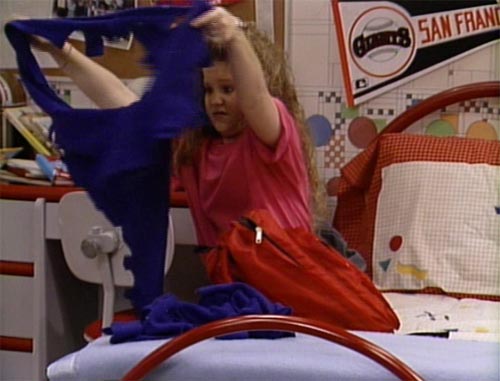 Apparently the school gardener drove over it with his lawn mower during recess, which sounds pretty far fetched.  Why would the school gardener even be mowing the lawn during recess?  Isn’t that some kind of safety violation?  My guess is that he did it on purpose because she’s always interrupting him and borrowing all his shit without asking all the time.  Kimmie Gibbler comes over with gigantic hair and cooks up a scheme with DJ to buy a replacement sweater. 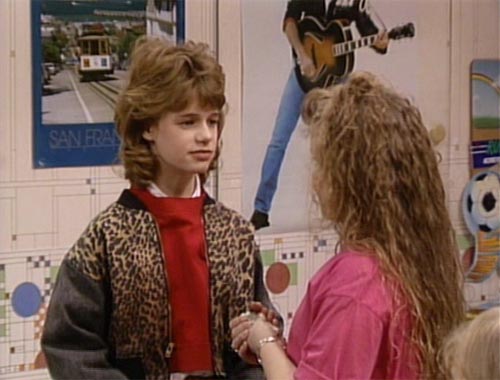 The girls convince Joey to drop them off at the clothing store but their plan is foiled when they discover that the sweater costs $80.  They try to haggle with the woman who works there but she aint havin it.  DJ and Kimmie decide to go try on some clothes and while they’re gone Stephanie sees a sign that says, “but now, pay later” and decides that she can just put the sweater in her bag and come back and pay for it some other time.  While the girls exit the store the alarm goes off but another woman that’s leaving at the same time gets frisked instead of them.

Back at the full house, Stephanie reveals that she got the replacement sweater for DJ.  I’m not really sure why she didn’t mention this earlier, especially since she’s not even aware of having done anything wrong.  DJ tells Stephanie that’s she’s actually committed a crime and the two of them make a plan to return the sweater the next day.  Naturally, Danny comes in that very minute to take them out to the movies and he insists that DJ wear her new sweater.

While Danny waits for the girls downstairs he chats with Joey, who is dressed up as Popeye for a Valentines Day costume party.  Are the writers of this show completely unfamiliar with the concept of Valentines day?  As well as I know, it is not a holiday that calls for costume parties or buying your daughter an expensive sweater.  Anyway, Joey does his annoying Popeye impression and then his recurring love interest, Cheryl, enters the scene dressed as Olive Oil.

Cheryl’s Olive Oil impression gives Joey’s Popeye routine some stiff competition for “most annoying impression ever” as she pretty much just screams the whole time.  They also dress the baby up as Sweet Pea and take her to the party as an accessory to their costumes.  Doesn’t it seem weird to carry a baby around all night at a party?

DJ covers up the anti-theft plastic tag on her sweater by bunching up the corner.  Stephanie does it too and they’re able to convince Danny that it’s a new fashion trend.  He decides to do it as well and the result serves as further proof that there’s really nothing he could do to look like a bigger dipshit.  Twisting the corners of Danny’s sweater is like pissing on a pile of shit.  Does it really make a difference? 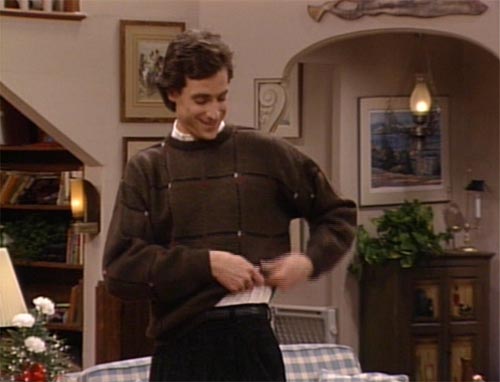 Once Danny and the girls are gone, Jesse romances Rebecca Donaldson in the hope of scoring some V-Day Va-Jay-Jay.  Based on Jesse’s thoughtful gifts and Rebecca Donaldson’s much more casual ones, it starts to seem like he’s way more into the relationship than she is.   This becomes verified when Jesse makes the symbolic gesture of burning the address book that contains the contact info of his many hoes and she responds by telling him she has a date next Saturday.  Jesse gets all butt hurt about it but agrees to take it slow if she needs to because he’s pretty much willing to do whatever it takes to tap that sweet, sweet Rebecca Donaldson ass.

When the girls return to the department store to return the stolen sweater they set the alarm off and are immediately apprehended.  They explain the situation to the clerk but she’s a total asshole about it and insists on calling their parents.  Seriously, I know that I’m always criticizing these kids for their presumptuous behavior but this really does seem like the kind of mistake a little kid would make and they were caught returning the sweater, not stealing it.  Is it really necessary to call their parents?  Isn’t the lesson then that if you steal something, you should never return it?  Why doesn’t anything on this show ever make any sense?

The Dad’s all find out about the stolen sweater then Danny takes the girls back to the full house for a heartwarming talk.  Danny clarifies that the moral of the story is that you should tell your parents when some shit goes down rather then try to execute some hairbrained scheme.  The girls hug Danny then after he leaves they have an exchange about the importance of sisterly camaraderie and then they hug and the audience goes, “aww.”  Man, up until that final minute I was really hoping that they’d tear each other apart.  If I don’t see some blood pretty soon I swear I’m gonna go crazy.  Maybe next episode…