Pre-Credits Gag:  Stephanie and D.J. argue over who gets the last cookie and then the baby gets it.  THE BABY GETS THE COOKIE!!!

Stephanie comes home with a hella good ass report card but then Danny sees a comment from her teacher about how she needs to control her talking in class.  He suggests that she finally learn to shut her fucking mouth for five goddamn seconds just one time in her shameful burden of a life and then she gets all offended for some reason and declares that she’ll never talk ever again. 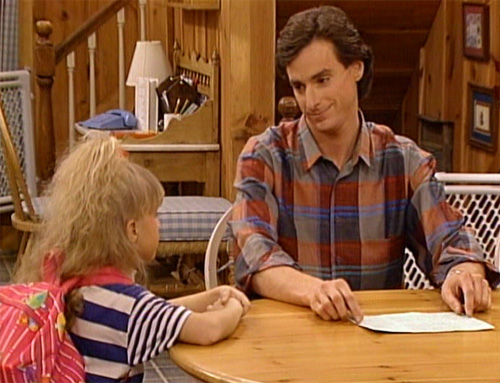 DJ comes home the very next moment and complains about how she got all A’s except for a D in Spanish.  She convinces Danny that she got the shitty grade because her teacher, Senorita Mosley, has a bias against her and so Danny agrees to set up a parent/teacher meeting.  Anyway, enough about the plot:  I know I’ve already mentioned the gigantic hair that Kimmie Gibbler’s been sporting lately but can we just take a minute to look at it?

That shit is magnificent.  She looks like one of the American Gladiators.  I swear, if it wasn’t for Kimmie Gibbler there’s just no way I’d ever be able to sit through this lousy piece of shit show.

The Uncle’s boss, Mr. Malatesta, comes by the full house and Stephanie answers the door but won’t provide him with any information about where the Uncles can be found because she’s fulfilling her vow to never speak again.  What the fuck does Mr. Malatesta have to do with her passive aggressive campaign against her family?  Does everyone who comes over to the full house have to be subjected to whatever petty bullshit’s going on over there?

Mr. Malatesta eventually finds the Uncles and tells them that he needs them to write an emergency campaign for a marshmallow company.  They pull a lame slogan out of their asses that Mr. Malatesta loves and then they talk him into hiring their hideous baby for the marshmallow commercial. 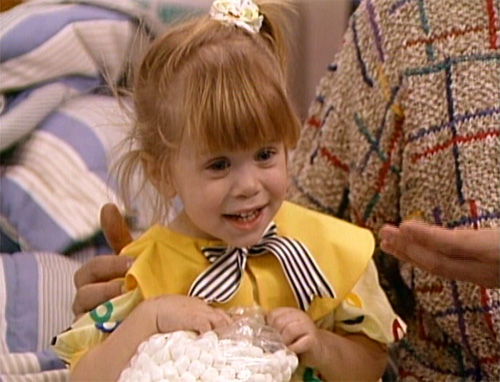 Danny visits Senorita Mosley to talk about DJ’s shitty grade.  When he gets there, she’s all star struck by him because she apparently watches his awful morning show even though it really seems like she’d be at work when it was on, but anyway never mind logic because the point is that she clearly wants some of that hot and steamy Danny Tanner action.  It’s always weird whenever they do scenes where a woman is supposed to be attracted to Danny because, besides the basic concept just being appalling, the only way they can even attempt to create any onscreen chemistry it is to have her laugh at all of his lame ass jokes, which immediately makes you assume that she’s crazy.  Anyway, Senorita Mosley clarifies that DJ got a bad grade in Spanish because she wasn’t doing any of the work and then offers to come by the full house later to set up a study program with Danny. And of course by “study program,” she means “hot fucking.”  As Danny leaves the classroom she bids him “hasta luego” and he replies, “el pollo loco,” which was a popular fast food chain at the time.  Man, if I was teaching someone English and I said, “see you later” and they said, “burger king,” I’d be downright offended.  After the meeting’s over, DJ gets all pissed when she finds out that Danny didn’t get her grade changed for her.

The Uncles help Michelle rehearse for her marshmallow audition, which is probably the only time in the Olsen Twins’ whole career that someone scrutinized their line reading.  The Uncles then split with the baby while Danny and Senorita Mosley enter the scene, labeling various objects with their names in Spanish to help DJ learn the language.  Danny continues to make jokes that casually degrade Latino culture and, as if that racism were just a little too subtle, Senorita Mosley holds a sign in front of herself for a significant portion of the scene that says, “perro,” which means, “dog.”

As she teaches Danny to roll his r’s, the two say “perro” back and forth to each other, which leads to them leaning in for a smooch.  Isn’t that fucking bizarre?  Imagine two people saying, “dog” over and over to each other and then having their first kiss.  Couldn’t they have picked a sexier word for them to say to repeat?  Anyway, DJ and her friends walk in on Danny and Senorita Mosley making out and DJ is, quite naturally, humiliated.  It’s almost like Danny consulted a guidebook on how to be a more embarrassing dad.

Danny and DJ have a talk about how he wants to fuck her teacher.  She manipulates him into thinking that he shouldn’t be allowed to get down on that sexy Spanish chocha because, as you may remember, Danny’s kids are pretty dedicated to the cause of him never getting laid.  Even though he demures about banging her teacher, Danny still maintains that it’s fucking bullshit that she wants her grade changed because she earned a D by not doing her work.  DJ avoids responsibility by sticking to being mad about Danny embarrassing her and storms off.

The Uncles get ready to film Michelle’s marshmallow commercial and then Grandma and Grandpa Katsopolis crash the set, presumably because we haven’t seen them in a while.  Anyway, Michelle refuses to say the marshmallow slogan because she’s sick of eating marshmallows from all of that rehearsing and then she gets fired.

Stephanie is still giving the silent treatment to everyone in the full house so the Uncles begin to devise a plan to get her to speak again.  Seriously, why would they do that?  Anyway, DJ enters the scene and tries to weasel out of going to school because she can’t face her friends after they saw Danny getting it on with their teacher.  Joey tries to solve the problem with the same thing he uses to solve everything:  shitty ass jokes.  He tells DJ that if she preempts the other kids jokes by making light of the situation herself, everything will be fine.  Poor old Joey, so conditioned towards a life of being shunned and ridiculed.

Danny tells Senorita Mosley that he can’t bang her until she’s done being DJ’s teacher so they agree to put things on hold.  Yeah, like that ever happens on this show.  Sorry folks, but that’s the last we’ll be seeing of ol’ senorita mosley.  Anyway, their parting words are interrupted by the school bell and Danny finds that he doesn’t have time to leave the classroom before the kids come in so he hides in the closet.  Yep, it’s come to this.

DJ totally disrupts her class by telling horrible and awkwardly delivered jokes about her Dad and the teacher.  Just as things start to cool off DJ decides to put her coat in the closet and wouldn’t you know it, Danny’s in there!  Oh Danny, when were you planning on coming out of the closet?  Danny sort of inelegantly excuses himself from the room but the kids don’t even seem to react to him being there at all.  What a weird device…  there was only like 30 seconds of build-up and then like no payoff whatsoever.

Back at the full house, Danny explains to DJ that he’s not gonna bang her teacher anymore but she still needs to take responsibility for her shitty ass grade.  You know, this was going to be the last Full House Reviewed installment because watching this terrible show every week has been ruining my life, but then I watched Danny’s inspiring speech about how you shouldn’t give up doing something just because it’s hard and I realized that I have to keep watching and reviewing every single episode of this horrible piece of shit show until I get through the whole fucking series.  I do this for you, the people who fuck around all day at a desk job.  This is my poem to you. 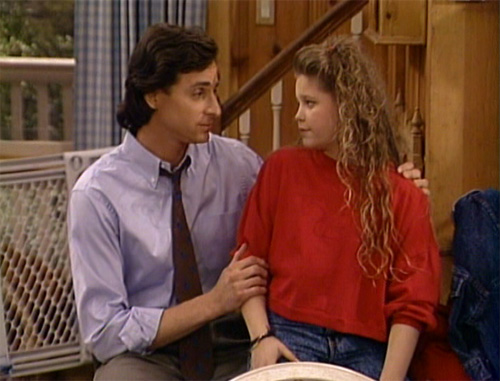 Sorry, I kind of went off on a tangent there… Anyway, the episode wraps up with the Uncles pleading with Stephanie to speak to them again.  Yep, that’s how they resolve the problem of Stephanie giving them the silent treatment:  they ask her to stop.  She then goes into a long account about a bunch of banal nonsense as the credits come on.  See, that’s the problem right there:  why does she either have to be totally silent or talk their ears off?  This whole problem started when she was talking too damn much in class, but that problem was never resolved because the resolution got totally blown out of proportion.  Why doesn’t anyone ever devise a reasonable compromise on this show?  FOR THE LOVE OF GOD, WON’T SOMEONE TEACH THESE CHILDREN MODERATION!??!