I know that it’s pretty standard to thank your readers and credit them with the continuation of an ongoing project like this, but in this case it really is totally, %100 true:  if it weren’t for the support of you readers out there, there’s just no way I’d still be doing this shit.  My sincerest thanks goes out to all of you for continuing to check the site and leaving comments.  As long as you keep coming back, I’ll keep writing these weekly examinations into why Full House sucks so hard.  I’d like to give a special shout out to Carrick, The Surfing Pizza, and the fine fellas over at Gentlemen of Leisure, all of whom have been great friends and early supporters of Full House Reviewed, and all great bloggers themselves.  I’d also like to thank T. Chang for leaving a really nice comment on the season finale that really helped convince me to keep writing this ridiculous blog.  Here’s to you all! 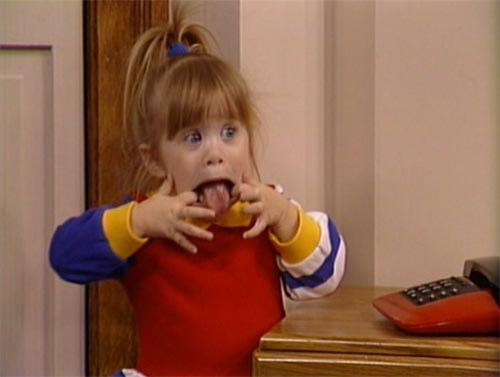 Congratulations are in order for Brandon Rowland, who won our very first contest by getting Dave Coulier to link to Full House Reviewed on Twitter.  I posted that contest really late at night and Brandon had already won it by the time I woke up.  I hope he’s patient with me for the amount of time it’s gonna take to get a Full House Reviewed shirt made up because I never thought in a million years anyone would win that damn thing.  Rest assured, it’s in the works.  I’d be happy to offer up another languidly-produced shirt to anyone else who can achieve the same goal, especially if they can get a response from Kimmie Gibbler because she’s the coolest. 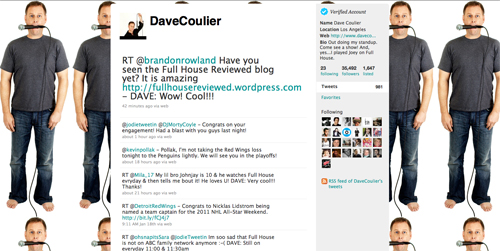 As for Dave Coulier’s actual response to the blog itself, he wrote:  “Wow!  Cool!!!”  I’m guessing he didn’t actually read it at all because you’d have to either be a saint or a complete fucking moron to respond positively to a blog that repeatedly points out what a no-talent fuckhead you are and condones your murder.

Update: Before I posted this he removed the endorsement from his twitter feed, presumably because he got around to looking at the site.

One last note before we move on the actual review:  Dave Coulier’s endorsement brought the site’s heaviest day of traffic ever and with it came our first hateful comment from an actual Full House fan!  Esther writes:

And there you have it, the answer to the question of who actually likes this ridiculous show.  Here’s to you, Esther.  Your eloquent statement absolves me of any guilt I might have felt about trashing this show.

and now, without further ado, here is Season 2, reviewed:

The hardest thing about reviewing every episode of Full House is that every episode sucks.  At what point does one run out of ways of saying that something is awful?  When does it become redundant to point out that the characters stated motivation in a given situation makes no sense, or that their reason for being somewhere completely contradicts their actions from the previous scene?  I guess time will tell, but we’ve got 6 more seasons to get through so I hope it can hold out till then…

My biggest realization as I sat through this crappy season is that Danny Tanner is not the main character of this series.  I always thought that this show was the story of a corny Dad who calls on his out-of-work comedian friend and his brother-in-law to help him raise his obnoxious daughters after his wife dies.  Now that I’ve wasted dozens of hours of my life watching this crap in the order it aired, I’ve finally realized that John Stamos’ character, who is named Jesse Cochran in Season One but becomes Jesse Katsopolis at the beginning of Season Two with no acknowledgement or explanation, is the central character of the show.  Full House is actually the story of a cartoonishly contrived biker/rebel/musician who agrees to help his nerdy brother-in-law raise his obnoxious daughters after the death of his sister.  This change in perspective still does nothing to explain why Joey is invited into this scenario.  Anyway, Jesse learns to embrace the newfound sense of responsibility and the terrible sweaters that come with his initiation into the Tanner family and although he’s not really much cornier than he was when he was a longhaired biker guy, it’s now in a more wholesome, family-friendly way.

Besides enigmatically changing his last name at the onset, Jesse goes through a number of changes in Season Two.  As I just mentioned, his image changes considerably from Season One, and he also quits his family exterminator business to develop an advertising jingle writing partnership with Joey.  Probably the biggest change comes with the introduction of the character of Rebecca Donaldson, who is Danny’s co-host on the morning talk show he is abruptly reassigned to after working as a sportscaster throughout Season One.  After meeting Rebecca Donaldson, Jesse stops spreading his seed all over San Francisco and decides that she’s the woman he wants to settle down with.  Rebecca Donaldson doesn’t take to Jesse right away and Jesse’s pursuit of her and the tension that arises in the early moments of their relationship makes for the closest thing we get to a continuing storyline throughout the season.  The character of Rebecca Donaldson is a welcome addition to the cast if you ask me, as she’s considerably less annoying than most of the other actors and seems to sort of round out the ensemble, although she was probably created for the sole purpose of convincing the audience that the dad’s on this show are not gay.

The characters of Danny and Joey seem even less developed in Season Two than they did in Season One.  The writers completely fail to add anything to them whatsoever, and instead seem to fall back on their token, one-note characteristics:  Joey does lame impressions and Danny has an obsessive-compulsive cleaning habit.  That’s it.

One thing that’s built-into the series is that you get to watch the kids grow up as it progresses.  DJ maintains her position as being a sort of straight-man for the series, as she’s the most “normal” or relatable character.  Stephanie begins to shed her little-kid charm and it’s pretty apparent that it’s just a matter of time before she’s pushed aside to bring the baby to the forefront.  As for the baby herself, this season seems to heighten the creators strategy of shamelessly jumping at any opportunity to have her do as many stupid baby tricks as possible to pander to the audience.  Can you imagine what it would do to you if you had an audience full of people clapping and laughing every time you said anything for the first 8 years of your life?  The Olsen twins upbringing is like some sick sociology experiment.  Still, as tasteless as the baby exploitation seems in these early episodes, it always pales in comparison to what’s to come.

Grandma and Grandpa Katsopolis become regulars in Season Two, which really doesn’t add anything to the series whatsoever.  I’ll be surprised if they return at all in Season Three and consider it safe to assume that they’ll move on to wherever Danny’s mom went after her early appearances in Season One. 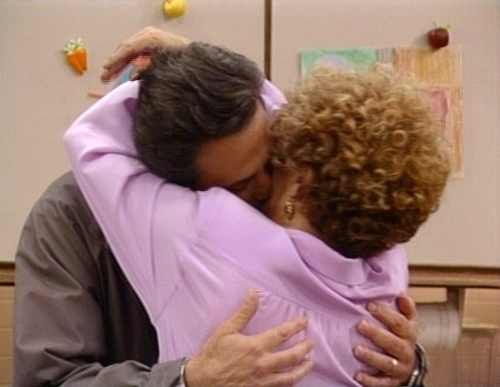 Finally, Kimmie Gibbler retains her status as the only tolerable character on this whole show.  Between her incredible fashion sense and total lack of regard towards DJ in any given situation, Kimmie Gibbler remains a bright shining penny that protrudes from a big steaming pile of shit. 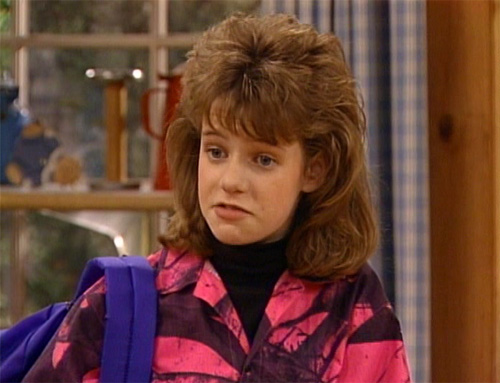 So I guess the big question regarding Season Two is how it compares to Season One.  Again, since both are so staggeringly awful, it’s hard to make a comparison.  I guess Season Two deserves some credit for establishing at least a loose form of continuity, whereas Season One just introduced and discarded characters and situations left and right.  Besides Joey’s girlfriend, Cheryl, who makes a return appearance before disappearing forever with no explanation, Season Two seems to almost hold some regard for the elements it introduces.  Still, Season Two has a higher volume of unspeakably awful moments, such as Jesse’s dreaded Christmas speech and the song Jesse sings to Michelle when she gets all obsessed with that other baby.

There are also some pretty great moments, too, like when DJ gets dumped by the kid from the Never Ending Story 2, or Stephanie’s pink spacesuit from the fantasy dream sequence about how her family doesn’t give a shit about her.  So, in conclusion, I don’t really know how to compare these seasons.  It’s like, which pile of shit smells worse?  I don’t know, they just both smell like shit. 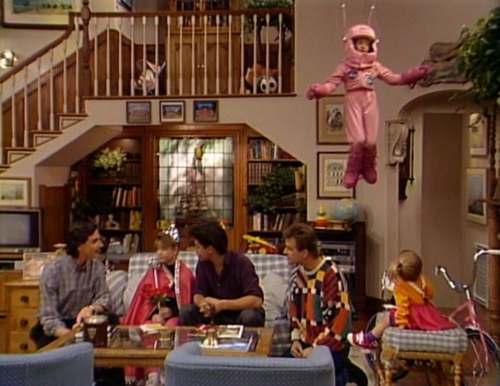 And with that, I’d like to put Season Two behind me.  Thanks again for reading this blog and stay tuned next week for the premiere of Season Three!  Something tells me it’s gonna suck! 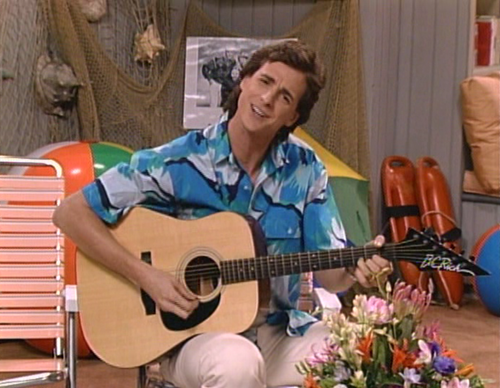 This entry was posted in Season 2, Season Review. Bookmark the permalink.