Pre-Credits Gag:  Jesse and the baby play hide-and-seek and, gosh darn it, she just can’t seem to figure out the rules!

Starting with this episode, the opening theme song no longer includes the verses, “how did I get delivered here?  Somebody tell me, please.  This old world’s confusing me.”  I figure they were dropped to make room for precious, precious advertising, but it’s also feasible that it was to spare us from a few moments of the vocal stylings of that terrible Rod Steward knock-off that they always hired to sing the themes to Miller-Boyett shows. 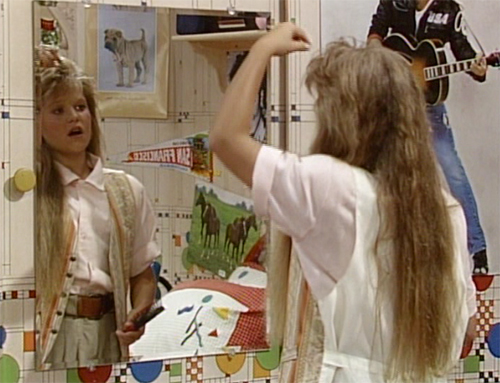 DJ meticulously prepares her appearance for her first day of Junior High, although it looks more like she’s going to an Indigo Girls concert if you ask me.  Stephanie feels upset that she and DJ will no longer be going to the same school but DJ’s like, whatever, I’m all mature now so why don’t you just back up out my face?

Rebecca Donaldson arrives at the full house to give Danny a ride to work just as Kimmie Gibbler arrives to walk to school with DJ.  Joey gets off the phone and announces that his and Jesse’s boss has invited them to pitch their next ad campaign over a game of golf.   Joey quickly discovers that Jesse doesn’t know how to play golf and he gives him a bunch of shit about it.  Oddly enough, there was no mention of Joey ever being interested in golf himself before the previous episode, where it was his choice of activity in Hawaii.  It looks to me like the rich tapestry that is Uncle Joey is becoming that much more ornate.

Danny gives the girls their school lunches but Kimmie Gibbler explains to him that it’s fucking lame to bring your lunch in Junior High so he’d better just give DJ some money.  Danny’s like, here’s some money, DJ, and why don’t you just go ahead and eat the peanuts out of my shit, Kimmie Gibbler?  Rebecca Donaldson reminisces about all the ass she got in Junior High and Danny’s like, I know you’re giving me a ride to work and everything, Rebecca Donaldson, but hows about you shut yer fuckin face? 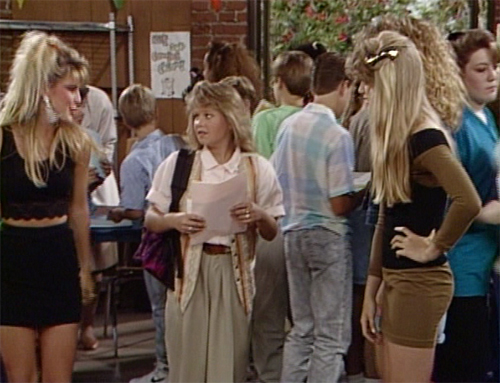 As DJ picks up her class schedule, she quickly discovers that Junior High is populated with catty, whorishly dressed girls in their 20’s.  She and Kimmie Gibbler feel even more out of place when Kathy Santoni shows up and they don’t even recognize her because she grew big ass titties over the Summer.  Although we’ve never seen her before, you may remember Kathy Santoni as the girl that the kid from the Never Ending Story 2 heartlessly dumped DJ for in Season 2, Episode 11.   Yeah, that’s right, I remembered that shit.

Michelle watches Joey prepare for Jesse’s golf lesson and utters her first annoying catch-phrase for the first time, “you got it, dude.”  Jesse shows up in a pink golf outfit, which is a pretty good set-up for the gayest goddamn thing I’ve ever seen in my life. 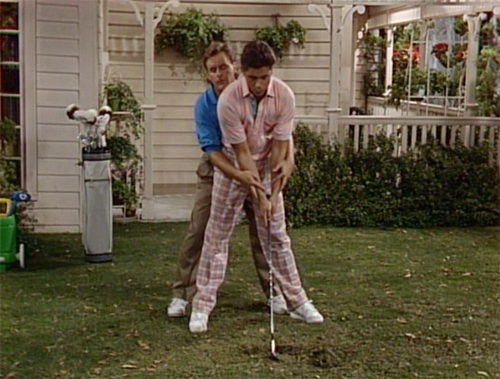 At lunch, DJ gets dissed some more by those girls in their 20’s and then she becomes the laughing stock of the whole cafeteria when it turns out that she’s wearing the same exact outfit as some crusty old teacher.  How humiliating!

I’m glad they made a point of how fucked up her outfit was because you just can’t ever tell with this show.  DJ becomes so embarrassed that she spends the rest of her lunch period sitting in the phone booth pretending to talk to someone.  Take that, DJ Tanner! 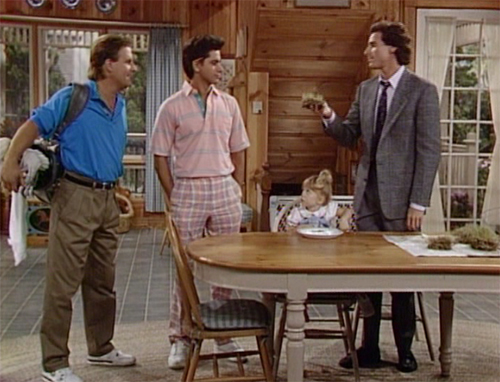 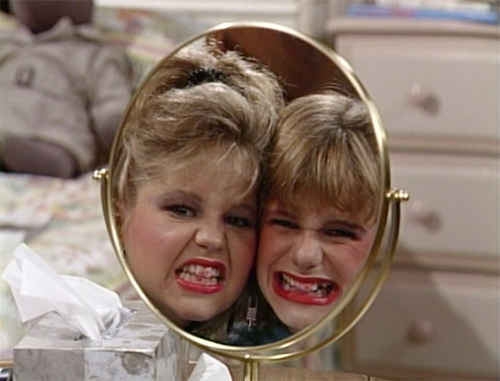 DJ and Kimmie Gibbler get all whored up before school so all their classmates wont treat them like shit anymore.  Stephanie tries to get in on their cosmetic get-together but they blow her off so she says, “how rude!”  That’s right, y’all, the catch-phrases are coming full force in Season 3!

So DJ tries to slip out of the house but Danny sees her and is all, how you bout to leave my house dressed like a cheap ass hoe?  DJ exclaims that Danny’s unwillingness to let her dress like a hooker is due to the fact he doesn’t want her to grow up.  Ironically, after making this point she storms off to her room like a big whiny baby.

Danny goes up to DJ’s room and instead of just telling her to wipe that shit off her face and take her ass down to school he has a heartwarming talk with her about growing up as gentle music plays.  Rebecca Donaldson shows up to give Danny a ride to work again and, upon viewing the situation, stops to teach DJ how to apply makeup in a way that doesn’t make her look like a whoreclown.  Well, gee, it’s a good thing that a woman showed up to teach DJ how to apply makeup!  What a fulfilling resolve.  Another thing that really bothers me is that DJ is supposed to be at school and Danny and Rebecca Donaldson are supposed to be at work while all this is going on.  Is the whole world really supposed to revolve around these kids fucking feelings?  Tell her that you’ll show her how to do it later but first she’d better clean up and go the fuck to school and then go host your fucking tv show.  I mean, really.

Firsts:  Kathy Santoni (Onscreen), Michelle says, “you got it, dude.”  Jesse and Joey go all the way