Pre-Credits Gag:  Danny and Michelle play basketball.  After scoring, they each say, “in your face!” and then he gets her to recite slogans for the NBA. 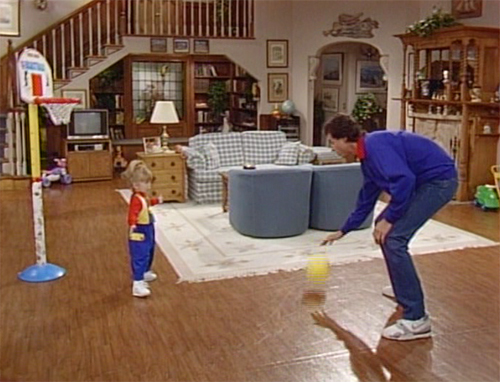 As the dad’s prepare for Michelle’s playgroup, Stephanie interrupts them with the news that she’s lost her front tooth.  I guess that when you have a show with young kids in it you have to write this kind of stuff in when it happens.  Either that or the producers wanted to do this episode so they knocked her tooth out.  I can’t say I’d put it past them.

DJ comes home with big news of her own:  she jumped her first fence on that horse from that one episode in the second season.  As I predicted, we never see the horse on camera again, but it’s nice to know that they’ve at least bothered to mention it.  Jesse and Rebecca Donaldson enter the full house and Jesse’s all fucked up and covered with mud from falling off a horse.  Jesse declares that he’s never going horseback riding again and Rebecca Donaldson says that’s no fair because she always does the things he wants to do, like seeing his shitty ass band perform at the Smash Club ten million times.  Jesse pompously declares that everything he likes to do is awesome so he should be appeased at all times.

Joey does lame impression for Michelle’s playgroup and the kids all listen stoically.  It’s interesting how the show sometimes acknowledges how fucking lame and unfunny Joey is… Is it supposed to be that he really is funny but sometimes people don’t get it, or that he’s endearingly bad, or what?  3 seasons in, I still have no understanding whatsoever of what the producer’s intention is with Joey.   Anyway, Danny shows up with a bunch of toys but then immediately starts scolding the kids for being messy and cleans the perimeter of the sandbox with a little hand broom.  Man, that’s not even anal retentive anymore, that’s straight up psychosis.

Danny hands out more toys to the kids but Michelle keeps being like, “my toy!” and grabbing them away.  Danny makes excuses for her and refuses to recognize that she’s being an asshole.  Surprisingly, Joey recognizes the problem and even goes so far as to point out that Danny’s incredibly flawed personality may be the root cause of it.  Man, when Joey steps in as the voice of reason, that’s when you know you’re really in trouble.

Rebecca Donaldson comes over to tell Jesse that she won’t be coming to see his lame ass band perform at the Smash Club that evening.  He gets all pissed and they argue until Michelle summons Jesse over a baby monitor that’s in the kitchen for the first time ever.  Kinda makes you wonder if that baby monitor will serve as some sort of plot device…

Sure enough, Jesse goes up to Michelle’s room and starts spouting off to the baby about what a selfish jerk Rebecca Donaldson is and, naturally, she hears the whole thing over the monitor.  Rebecca Donaldson gets really pissed and calls Jesse out on his bullshit but he refuses to back down so the fight continues to escalate until they ultimately break up. 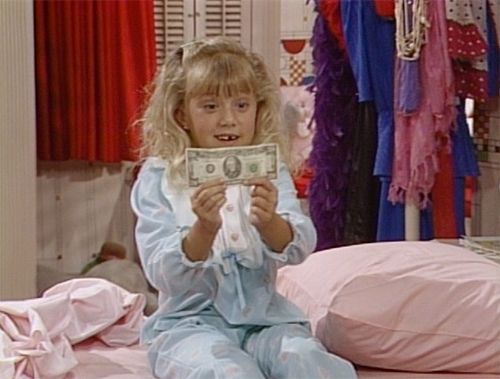 Stephanie wakes up to find that the Tooth fairy has left her $20.  When she shows Danny, he’s like, “aw, fuck!”  At breakfast, Danny tries to talk Jesse into patching things up with Rebecca Donaldson, probably so he doesn’t have to deal with constant tension between his co-worker and his worthless live-in brother-in-law, but Jesse aint havin it.  As the family sits down to eat, Michelle tries to claim all the pancakes as her own so the family stages a routine about how great sharing is.  The routine is really long and doesn’t even have any jokes in it, they just all pass a pancake around a table, but in the end Michelle learns to stop being such a selfish asshole so I guess it’s kinda worth it.

Rebecca Donaldson shows up at the full house and Jesse pompously assumes that it’s to try to win him back but it turns out that she just put all his shit in a box and is all, to the left, to the left.  She explains to the kids that she and Jesse have broken up and they freak out.  DJ tries to convince Rebecca Donaldson to accompany the family to the movies later but she says she has plans already, which Jesse assumes means she has a date. As Rebecca Donaldson leaves the full house (incidentally, she exits through the back yard, presumably because they already have a set built for back there), DJ confronts her and expresses her concerns over how she’ll be effected by their breakup.  Rebecca Donaldson explains to DJ that even though she’s broken up with Jesse they can still go horseback riding and she’ll be there to teach her about tampons and stuff.  Upon learning that the breakup between Jesse and Rebecca Donaldson will have no direct effect on her, DJ is consoled.  Damn, DJ, way to not give a fuck about your uncle’s feeling at all.   Anyway, it turns out that Rebecca Donaldson was bullshitting about having other plans and so she agrees to take DJ and Stephanie to the movies later.

DJ and Stephanie hatch a zany scheme to get Jesse and Rebecca Donaldson back together.  As they stall Rebecca Donaldson up in their room, Jesse comes home with some cheap hoe, just like old times.  The hoe starts to get annoyed with Jesse for constantly talking about Rebecca Donaldson but then he smoothes things over by inviting her up to his room for some hot fucking.  He heads upstairs then DJ grabs Jesse as he enters his room and convinces him to try to talk things out with Rebecca Donaldson.

The two begrudgingly try to work out a resolution but then the moment they agree to patch things up that hoe reenters the scene.  The timing here is really odd because that hoe was supposed to follow Jesse upstairs but then she disappeared for about 3 minutes.  What was she supposed to be doing all that time, washing her vagina? 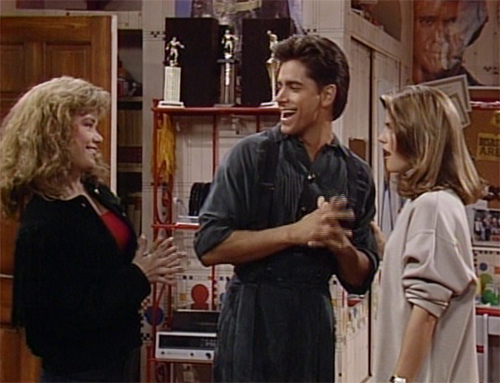 The relationship between Jesse and Rebecca Donaldson makes no sense to me.  I can see why he’s into her, on account of she’s hella fine and has a really good job and seems to be the only person in the entire Full House universe that has any common sense or reasoning or basic consideration towards other people whatsoever.  But what does she get out of the relationship?  Jesse is greasy and self-absorbed and only cares about Elvis, his shitty ass band, his hair,  and fried chicken.  Every time they argue, Rebecca Donaldson is clearly in the right and Jesse’s behavior is totally intolerable.  I know that this show needed some kind of romantic storyline to keep things moving and everything but, God damn, this is one shockingly unhealthy relationship.