Credits Gag:  Danny and the girls get together to decide what to name the dog.  Everyone comes up with a bunch of crappy names until DJ suggests “Comet,” her reason being, “because he’s fast and he has a tail.”  So there you go. That is why the dog’s name is Comet.  This is another rare example of the pre-credits gag being relevant to the rest of the show.  In this case, it’s actually relevant to the rest of the series.  Naming the dog equals a pivotal event.

As Rebecca Donaldson urges Danny to hurry up so they can get to the airport on time, she delivers a bunch of useful exposition about where the two of them are going.   Apparently they’re flying to some fashion expo in LA, where they will receive fancy makeovers.  It’s kind of weird that she decides to tell the family all of this just a few minutes before heading out…  I don’t know, it’s almost like she’s delivering unnaturally placed exposition in order to set up the plot for the audience or something.  As Danny heads out the door, Stephanie asks if the dog can sleep in her bed while he’s away but Danny aint havin it.

Stephanie tricks Michelle into looking the other way while the dog eats her ice cream and the baby gets hella pissed.  She keeps saying, “the doggy ate my owse cream” which you better believe gets milked hard for the rest of this episode. 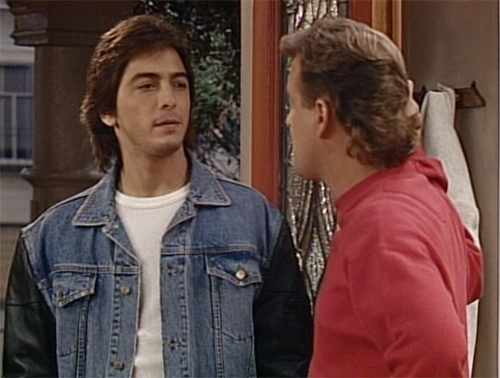 So it turns out that Scott Baio is an old friend of Jesse’s who he hasn’t seen since a little before Full House started.  When Scott Baio goes into the kitchen to greet Jesse, he expects to see him rollin’ doobies and bangin hoes on his motorcycle like they used to do in the good ol’ days, but instead he finds him singing “The Farmer in the Dell” in a cowboy apron while little girls dance around him in a circle.  I know that we’ve seen Jesse do some pretty lame stuff over the course of this series and that the point of this scene is to show how much Jesse has changed since he’s moved into the full house and everything but, god damn, could they have possibly picked a more pussy ass activity for this guy to be engaged in while his friend walks in?  I mean, really, how often do they break out into choruses of children’s songs on this show?  How did that even get started?  Joey went to answer the door about a minute ago and the kids were arguing.  Did they really patch things up and then break into song that quickly?  Fuck.

So anyway, Scott Baio and Jesse are really happy to be reunited since Scott Baio’s been away traveling around Europe or something.  The two of them reminisce about all the pussy they got back in the day while the girls stand around looking confused or disapproving, which is a routine they used to do a lot with Jesse early on in the show but was phased out since Jesse settled down with Rebecca Donaldson, therefore entering a life of chastity.  Anyway, Jesse introduces Scott Baio to his corny new family and Scott Baio makes comments about how soft and wholesome Jesse has become.  He reveals to the girls that Jesse used to be referred to as “Dr. Dare” and that he’d do whatever dumb ass bullshit anyone dared him to.  Jesse decides to relive his lost youth by riding around on motorcycles and acting like a jerkoff with Scott Baio for the next few days. 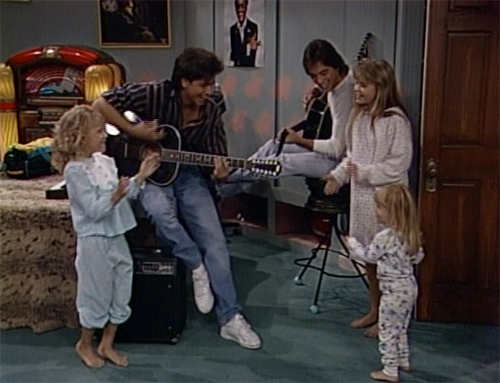 Jesse and Scott Baio come back to the full house after a long night of, I don’t know what… certainly not drinking.  What could the characters on this show possibly do when they wanna cut loose?  They were probably playing freeze tag in the park or something…anyway, they decide to cap off the evening by singing “Louie Louie” in Jesse’s room.  The singing wakes up the girls, including Stephanie who we see letting the dog sleep in her bed even though Danny totally told her not to, and they all go into Jesse’s room for a late night dance party.  Joey breaks up the festivities and makes the girls go back to bed as Jesse and Scott Baio announce that they’re off to Tahoe for the evening but they’ll be back tomorrow night for a big band reunion party they’re throwing at the full house.

Joey puts the baby to bed and discovers that the dog got under her covers somehow, which really doesn’t make sense seeing as how the dog being in Stephanie’s bed was the plot point and we just saw it like 30 seconds ago.  Well, I guess that doesn’t matter because the Stephanie-wants-to-sleep-with-the-dog-in-her-bed subplot pales in comparison to the Michelle’s-mad-at-the-dog-for-eating-her-“owse-cream” subplot, as least as far as Nielson ratings are concerned.  Man, I bet the shows creators couldn’t fucking wait to get that baby and that puppy in as many scenes together as they could possibly cook up, even if it required a nonsensical, go-nowhere Stephanie sub-plot to get there.  Anyway, thanks to Joey’s tactful intervention, the baby and the dog make up.  That’s right, families at home, that baby and that puppy LOVE each other! 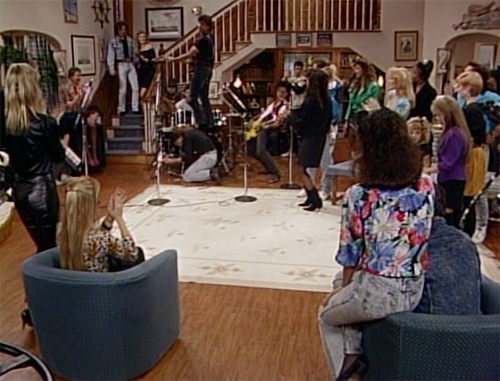 Joey and Scott Baio throw their bands reunion party, which plays out the same way as all of Jesse’s festivities:  they sing lame covers while a bunch of late 80’s fashion don’ts dance around the living room.  Seriously, this is their big wild party?  Where’s the meth?  Where’s the whores?  One of the dudes in their band has a keytar, which is at least kind of cool, but he certainly doesn’t look like he could kick anyone’s ass.  Scott Baio’s been breaking Jesse’s ball’s for the last 13 minutes about how wholesome and doughy he’s becomes and THIS is his idea of a party?  They don’t even do anything that prevents the kids from being allowed to be there.

In the midst of all this non-threatening fun, Danny and Rebecca Donaldson come home, creating a scene almost entirely identical to the one in Season 1, Episode 2 where Jesse let’s the girls party at his band practice instead of going to bed while Danny’s at work.  You think it was an intentional homage?  I sincerely doubt it, and find it much more likely that the creators are simply running out of scenarios. 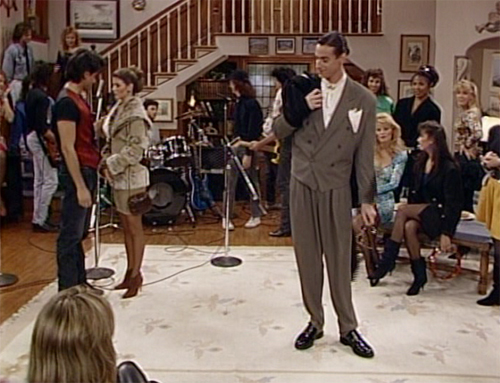 So the twist here is that Danny doesn’t even give a shit about the party, apparently because he’s too jazzed about his lame makeover to care about anything else.  Rebecca Donaldson gets kinda mad because Jesse was dancing with some blonde titty girl when she came in but it’s not really a big deal.

Jesse tells all the party-goers that they have to go home because it’s the girls beddy bye time and Scott Baio calls him out on what a punk bitch he’s become.  Yeah, only a real weiner would allow three little girls to go to bed instead of rockin’ out all night. Furthering the point of how lame Jesse has become, Scott Baio produces a tape of Jesse riding his motorcycle along the edge of a 6 story building back in 1983, proving how rad he used to be by contrast.  The switch between Jesse and the motorcycle stuntman in this scene is as obvious and inorganic as possible, even though they have a dub of Jesse exclaiming “have mercy” over the footage.  Golly, does this guy have to say his lame catch-phrase anytime he does anything or what?  I bet he says it every time he squeezes a turd out of his ass.

So everyone gives Jesse a hard time about how he wont do dumb ass dangerous stunts anymore and then he runs off to reenact the one from the tape, which brings us to a rare scene that takes place outside of the full house.

Jesse has a heartfelt conversation with Scott Baio on the roof of the building and Scott Baio all of a sudden really thinks that Jesse shouldn’t perform the stunt.  The two of them talk for a while about their lives and the way things have changed but Scott Baio is ultimately unable to dissuade Jesse from doing the stunt.  At the last moment Rebecca Donaldson shows up and commands Jesse not to do the stunt, which is kind of amazing.  I mean, here’s Jesse desperately trying to rekindle his lost manhood and then his girlfriend rolls up and totally cuts his nuts off in front of everyone?

So Jesse rides up to the ledge in a very suspenseful, low-budget scene but he decides at the last minute not to do it, possibly because he’s come to his senses or maybe just because nobody really wanted him to do it anyway.

Back at the full house, Jesse and Scott Baio bid each other a fond farewell.  Yeah, I’ve got a feeling we won’t be seeing that guy again.  Jesse sits in the living room, deep in thought, and then DJ enters the scene and the two engage in a heart to heart talk.  Jesse regrets not doing the lame stunt and then DJ comforts him by quoting Nancy Reagan.  The music comes on as Jesse says he misses the old days and DJ points out how much closer they’ve become since then.  How come Scott Baio didn’t get to have the scene with the music?  Why’s it gotta go to DJ?  Seriously, I wanna know if they had policies about when to use the music or what?  Anyway, Jesse realizes that DJ and the rest of her annoying asshole family are more meaningful and important to him than riding around on a motorcycle and spreading gonorrhea all over California.  The end.

It was cool that we got to see Scott Baio and everything, but this episode is pretty much just the same Jesse story we’ve seen like 10 times already.  I kind of thought they laid this storyline to rest last season, but I guess that since it’s the closest thing to a  character arc on the whole show they’ve gotta get the most they can out of it.  I mean, think about it;  the other storyline on this episode was about how the dog ate the baby’s ice cream.