Pre-Credits Gag:  DJ asks Michelle if she wants to participate in a recording that is being made for Grandma.  Good ol’ Grandma…  although we may never see her on camera ever again, she’s still alluded to from time to time if it serves the purpose of a cheap shtick.  Also noteworthy in this scene is how much more articulate Michelle has become, presumably because she would age during gaps between tapings.  Kids… one day they’re barely able to string two words together, and then before you know it they’re spewing out obnoxious, bratty catch-phrases.  Anyway, DJ and Michelle sing, “The Itsy Bitsy Spider” into the recording device and there isn’t even a joke at the end or anything.

Michelle anxiously awaits her third birthday, which is all set to have a circus themed party.  Jesse tries to convince everyone to have an Elvis themed party instead due to his hatred of clowns (wow, that’s the first time I’ve ever related to anyone on this show about anything) but the circus theme prevails.  Maybe if Jesse had been able to suggest a better alternative he could have persuaded the rest of the family to change the theme, but unfortunately Jesse is such an under-developed character that his range of interests only allow him to pull from a pathetically shallow pool of ideas.  Seriously, what else could he possibly come up with besides an Elvis theme?   A fried chicken themed party?  A feeling conflicted about outgrowing your rebellious youth themed party?  How about a Rebecca Donaldson’s hot ass themed party?  Actually, that sounds pretty good…  Maybe I’ll keep that in mind for my own next birthday… 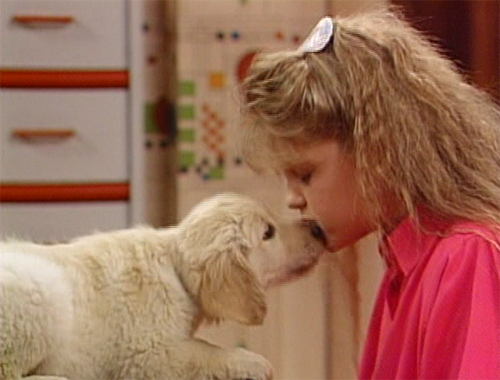 Up in the girls’ room, DJ decides to play the role of the lion tamer at the circus party, using the puppy as her lion.  ISN’T THAT SO ADORABLE!??!  Stephanie decides to be the juggler even though she sucks ass at it.

Danny comes home with a clown cake for the party and bitches about how fucked up his car is.  Jesse agrees to fix it for him and then has the nerve to try to charge him for it even though he lives at Danny’s house for free and has a lucrative career in advertising.  Prick.  Michelle barges in and is all excited for her stupid party and then starts eating the cake with her hands.  Everyone laughs at how adorable this is even though it’s the brattiest thing I’ve ever seen and is clearly behavior that’s warrants discouragement. 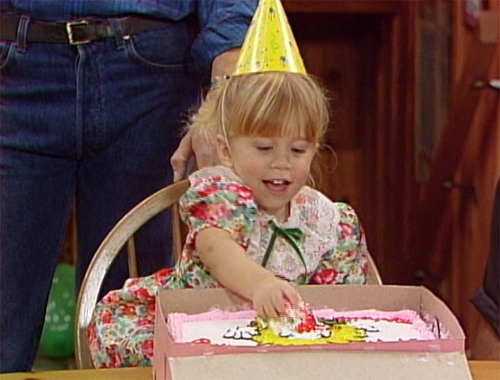 Watching this stupid show has really brought a lot to my attention about why the Olson twins turned out to be so fucked up.  Think about it:  when you’re a baby everyone thinks everything you do is great, right?  And then you get a little older and you have to learn that certain behavior is not ok and that everyone doesn’t think it’s really that adorable that you want to be the center of attention all the time.  Well, in the case of the Olson twins, that never happened.  Not only did they have a whole tv studio worth of people encouraging them to act out all the time, but they also had an entire studio audience watching and laughing while they did it.  And not only were they never discouraged about doing things like eating their birthday cake with their hands, they were actually PAYED TO DO IT!  So what happens to a person when they’re raised this way?  I guess they grow up to be a coke-snorting, anorexic, untalented billionaire celebutante who’re famous for…  I don’t know what.  Being an annoying brat in the early 90’s, I guess.

Anyway, back to the scene:  Stephanie enters and demonstrates that she’s still a shitty juggler.  Jesse takes Stephanie and Michelle for a drive in Danny’s fucked up car and Joey starts eating the cake with his hands just like the baby did.  See, that part I don’t get.  While this series serves as evidence for why the Olsen twins are the way they are, what’s the explanation for what’s wrong with Joey?  Seriously, how did he get like that?

While Joey and Danny finish putting the circus decorations up at the full house, Jesse calls from a gas station to let them know that the car is being fixed.  I thought Jesse was supposed to fix the car?  The gas station attendant tells them that the car is good to go and then Jesse and the girls all decide to take giant shits before heading back to the full house.  And wouldn’t you know it?  While they’re all shitting, the gas station attendant goes home and unknowingly locks them inside the station.  You might think that he’d notice their unattended car right outside or that he’d check to make sure that they’d left in the 10 seconds since he’d seen them, but no.

After dropping their enormous shits, Jesse and the girls realize that they’re trapped inside the station, which apparently has no phone or windows or any method of exiting aside from the garage door that locks from the outside.  Michelle realizes that she won’t be able to attend her dumb ass circus party and gentle music plays as she makes a sad face and the audience goes, “aww.”

While DJ tries to stall the party guests, Joey and Danny finish applying their clown costumes.  Oh, man.  You know, I was always at a loss to come up with something that would make me hate Joey and Danny’s stupid faces more than I already do, but then they just had to go and put clown costumes on.

A knock at the back door marks the arrival of some kid and his big titty aunt, who Joey and Danny both spit hella game at even though they’re dressed like clowns (not that it really makes any difference).  I like how people can just show up at the back door whenever it’s convenient for staging.

Jesse concludes that there’s no way to escape the garage while Michelle bitches and moans about missing her stupid fucking circus party.  I don’t know, man, if you gave me a choice between the two, I think I’d rather hang out at the garage.   Jesse feels guilt about the situation and then has a moment of inspiration as he stares at a funnel….

No…  no!  Not again!  Those of you who’ve been following this blog for a while may remember that one of the absolute worst moments in this endless stream of unwatchable bullshit was Jesse’s ridiculous Christmas speech in which he tried to convince a group of stranded airline passengers to pretend that a snowed in terminal was a delightful and heartwarming holiday gathering.  Now Jesse has decided to pretend that a filthy garage is a circus party.  Well, fuck.  It’s bad enough that they’ve already started recycling storylines on this show (as noted as recently as last episode), now they have to revisit the worst scene in the entire series?  Why can’t they ever bring back shit I actually enjoyed, like when Joey got hit in the head with a coconut in the Hawaii episode?  How come the only things that get repeated are stupid shit like corny inspirational moments and annoying catch-phrases instead of something I’d actually like to repeated, like Joey being in physical pain?
So even though Michelle is mysteriously missing the rest of the family decide to start the circus party anyway because there’s a bunch of kids sitting around so what else are they going to do?  DJ does her lion tamer act with the adorable puppy and even though I just watched it I can’t seem to remember it.  Then Joey and Danny come out in their clown outfits and aggressively drain my will to live.  They do a bunch of slapsticky bullshit and then Danny tries to fuck that big titty aunt some more, who, incidentally, is the only other adult at the party for some reason.  Joey salts Danny’s game so Danny pours a bunch of food down his pants. 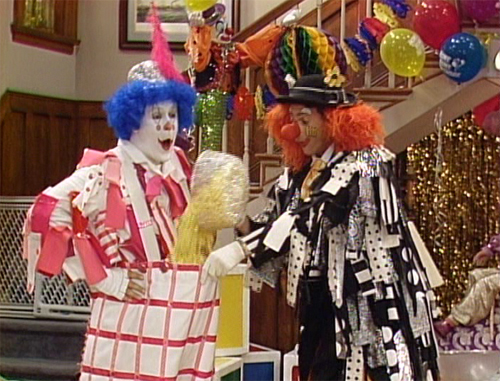 And if that’s not already enough to make you feel like your last semblance of logic and reason is crumbling around you, there’s a ring at the doorbell and what’s at the door?  A fuckin’ elephant!  How did it even ring the doorbell?

Meanwhile, Jesse and Stephanie put on their own circus for Michelle inside the filthy garage.  For reals?  That circus they just had at the full house was exhausting!  Now I gotta sit through this shit? 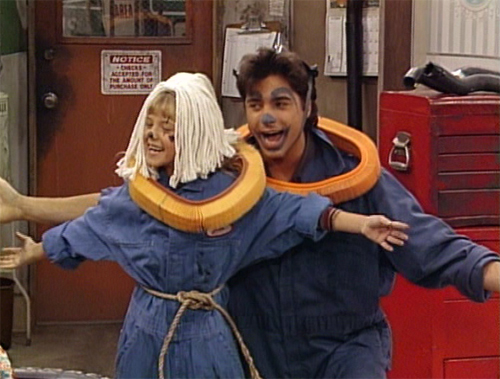 Jesse and Stephanie make a pathetic facsimile of the circus with a bunch of filthy junk they find laying around the garage.  The big climax of their unnerving performance is when Stephanie tries to juggle.  You see how this show rewards you when you pay close attention to the elements of the story?  I don’t know if I’d go so far to say that she successfully juggles, but she does manage to throw the balls in the air and catch them one time, and that seems to be good enough for the audience.  Just as they run out of material, the gas station attendant returns, thereby liberating them from their hellish imprisonment.

Jesse brings the girls back to the full house just in time to miss the circus party and Danny gets hella mad and yells at Jesse.  The girls explain that Jesse put on a disgusting circus while they were trapped and then Danny is deeply touched, all the way down to his butthole.  If you think about it, though, the circus that Jesse put on was less than 3 minutes long, so it’s only because the gas station attendant came back and freed them right when it ended that it really made such a difference.  What if they’d been trapped for like 6 more hours?  Would 3 minutes of distraction even really done that much to lighten the mood?  Anyway, whatever, at least the music doesn’t come on this time.

So then they take Michelle into the back yard and she rides around on that elephant and that’s it.  Fuck, that was a rough one, you guys.  It’s weird how much worse this show is when it feels like the people behind it are really trying.  They worked really hard to make that as awful as it was.

64 Responses to Season 3, Episode 10, “The Greatest Birthday on Earth”