Pre-Credits Gag:  Jesse finally redecorates his room and gets rid of the pink bunnies on the walls.  He’s concerned that it will upset Stephanie because they were left over from when it was her room, but she doesn’t give a shit.  Michelle comes in and makes some really obnoxious sad faces over the loss of the pink bunnies and then Jesse reveals that he’s framed one and left it up, appeasing her for the ten millionth time.  Although this pre-credits gag doesn’t really set up the premise for the episode, it does lay out the theme pretty well, as this one’s all about how the older sisters are yesterday’s news and Michelle’s emotions will be the deciding factor in all the matters of the full house from now on.

DJ, Stephanie, and the living legend known as Kimmie Gibbler are all hanging out watching the music video awards when Michelle walks in and hits Stephanie right in the face with a pillow! 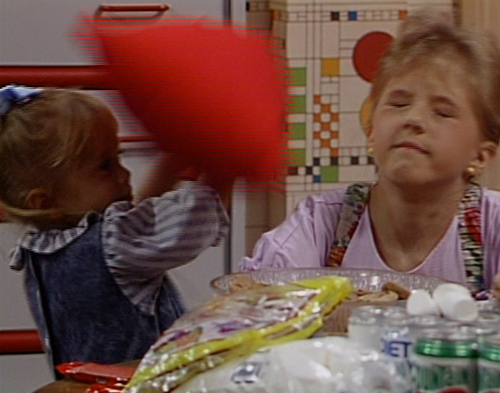 Damn!  That was harsh!  That shit came out of nowhere, too.  I feel so conflicted over it…  on the one hand, that has to be the single most aggressively obnoxious action I’ve ever seen on this show, which is saying so much that I don’t even want to get into it.  On the other hand, I got to see Stephanie get hit in the face, so it was kind of awesome.

Pretty soon a riotous pillow fight breaks out and before you know it a window is broken.  Danny rushes in to see what the fuck is going on and, after assessing the situation, doles out punishments to everyone but Michelle.  The girls tell Danny that it’s fucking bullshit that he doesn’t bring that hideous monkey baby to justice but it falls on deaf ears.  So, there you go, they finally acknowledged that Michelle is a total bitch and that Danny never does anything about it.  As I’ve mentioned many times, you can never tell when someone’s behavior is going to be considered acceptable by the other characters, because pretty much all of their behavior is totally unacceptable most of the time, so it’s always kind of nice when you see someone getting called out on their bullshit.

Joey helps Jesse pick out an engagement ring for Rebecca Donaldson from this scuzzy jeweler played by Paul Wilson, who I recognized because he played a number of different small roles on the Larry Sanders Show.  You ever watch that show?  It’s really good!  It’s like, the opposite of Full House.  It’s subtle and has interesting characters, it’s well written and performed, and I like watching it.  Maybe I should just talk about how good the Larry Sanders Show is for the rest of this entry…

Naw, I couldn’t do that.  Full House is my thang.  Ok, so, anyway, Jesse tries to get the best ring he can off the scuzzy dealer and then Rebecca Donaldson shows up and sees a big expensive one and hella wants it.  A couple of the characters make remarks about how it’s weird that the dealer’s at the full house instead of in a store and it seemed for a second that this was gonna be an episode about Jesse getting ripped off by a shady fellow but *SPOILER ALERT* we never see Paul Wilson after this scene and I guess the reason for the strange circumstance, as is so often the explanation, is because they didn’t want to build a new set.

Michelle refuses to go to bed and demands that the dad’s sing her the Teddy Bear Song and they totally just do what she says.  After the song is over they turn out the lights and leave the room and then have a talk about how Jesse’s decided to sell his signed Elvis guitar to pay for Rebecca Donaldson’s bourgeois ring.  Their conversations  in interrupted by Michelle, who is out of bed and strutting around the Full House like she fuckin’ owns the place.  You can’t really blame her for it, either.  If you were able to instigate pillow fights blame-free and command people to sing a song about teddy bears at your whim and fancy then you’d feel pretty entitled, too.  We’re exploring root causes here, people.

So Michelle just totally blows off the dads when they tell her to get her ass to bed and then they stand around trying to figure out what to do about it.  Joey argues that it’s so difficult to tell her what to do because she’s so adorable, and then he gives an impression of her giving the thumbs up and saying, “you got it, dude.”  Oh, god damn.  That’s Joey doing an impression of Michelle saying her catch-phrase.  What unholy alchemy did it take to bring those elements together?  Can you think of a more horrible combination of pain and misery in all of creation?  It’s worse than being raped by someone who’s on fire.

So now that the show has spent a bunch of screen time touting it’s own smug view of Michelle, they switch over to the older, less marketable kids’ scenario.  Interestingly enough, this scene actually contains the exact moment where Stephanie has identifiably lost the last of her little kid charm.

That’s it, you guys, Stephanie is not cute at all anymore.  She will never say anything likeable or even be endearingly awful again.  From here on out she just sucks.  Maybe that’s why they’re pushing Michelle so hard?

Danny catches the girl trying to watch the music video awards through Kimmie Gibbler’s window and tells them to go to bed.  They tell him that it’s fucking bullshit, once again, that they’re in trouble and being forced to go to bed when Michelle is parading around the house doing whatever she wants and Danny’s just like, “Michelle’s my little princess.”

The dads make another attempt to put Michelle to bed but she pleads with them through the door of her room until they eventually cave in.  Before making a b-line for downstairs, Michelle yells, “let’s party, dudes!” solidifying that this episode would in fact make for an excellent drinking game if you took a shot every time she said a phrase that ended with, “dude.”

Down in the living room, Michelle eats junk food and watches Arsenio Hall.  Whatever happened to that guy?  He was a late night talk show phenomenon for like 4 years and then he just totally disappeared.  That’s one of those things that make you go, “hmm…?”  Remember when the Olsen twins went on Arsenio?  They gave a worse interview than Jason Voorhies (if you don’t believe me, youtube that shit.).  Just to hold on to a tangent for another minute so I can actually talk about something I remember fondly, I’d have to say that the greatest episode of the Arsenio Hall Show that I can remember seeing is the one where they settled the rap feud between “Whoomp There it is” and “Whoot There it is.”  A lot of people got together to make history that night.

Oh yeah so anyway Danny eventually comes down and lectures Michelle about the importance of a good night’s sleep, which immediately bores her into unconsciousness.  Wah Wah!

The next day the two older sisters work off their punishment by raking a bunch of leaves and then Michelle actually comes in and starts kicking their leaf piles and throwing them around and stuff.  DJ tells Michelle that if she’s gonna fuck up their shit then she has to clean it up herself and then Danny sees Michelle raking the leaves and gets all pissed at DJ and Stephanie again.  Can this get any more fucking excruciating!??!

Yes, yes it can.  Michelle decides that she wants to go swimming in her little pool and when Danny tells her that it’s too cold she drags it into the kitchen.  DJ and Stephanie decide to passively ignore the situation and continue on with their leaf raking.

Rebecca Donaldson interrupts Jesse and Joey’s jingle-writing session to tell Jesse that she had his ring appraised and that she found out that it was hella expensive and he had to sell his Elvis guitar to pay for it.  She surprises him by buying back the the Elvis guitar but his masculinity gets all threatened and he refuses to accept it.  Rebecca Donaldson then proceeds to very tactfully smooths out the situation without ever pointing out that she makes way more money than he ever will.  Rebecca Donaldson, how do you do it?

DJ and Stephanie gleefully narc out Michelle after she sets up her pool in the kitchen but then Danny just blames them for not stopping her.  OH MY GOD!!!  If this story doesn’t end with Danny realizing that his baby is a fucking villain and dropping her down a smokestack then I just don’t know if I can do this anymore.

Well Danny at least finally realizes that he has never doled out any discipline to the brattiest child that ever walked the face of the Earth so he finally decides to make some sort of an effort by having a very special talk with her as the music comes on.  He explains that since her her mom is smoldering in the ground, Michelle is his last chance to have a baby so he never wanted her to grow up, but she’s gonna grow up no matter what and she’s already turning into a real bitch so he’s gonna have to start punishing her sometimes.

Usually after the music and the hugging, the show has the good graces to at least be over, but this episode just can’t stop being terrible so we get one last scene of Michelle finishing up her punishment of sitting in the corner.  Danny comes in and explains some more about how she’d better start fucking listening to him and the uncles or they’re going to bring a shitstorm around her neck like she’s never seen before and then he tucks her into bed.  As if that wasn’t the worst fucking episode of the whole series, which it totally was because of the gleeful celebration of that baby’s stupid obnoxious bullshit that ran throughout almost every scene, there’s one final moment that just totally stabs you in the nuts with it’s contrived cornball sentiment.  Michelle looks at Danny and says, “am I still your little princess?” and then after the audience goes, “aww,” he gives a big nerdy thumbs-up and says, “you got it, dude!” 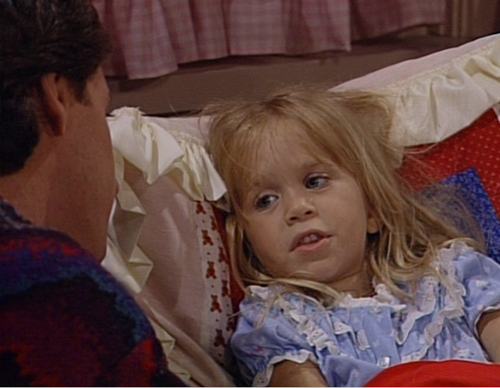 Oh my god you guys I don’t think I can do this anymore.  I had really honestly forgotten how much worse this show gets.  Those first 3 Seasons were nothing compared to this.  I thought that they’d settled into a garbage-coated plateau of awfulness but apparently that was just a brief stagnant period before the show began to ascend to the next level of intolerably obnoxious shit.  Today I hate this show so much more than I ever thought I could.  One can only wonder what tomorrow will bring.