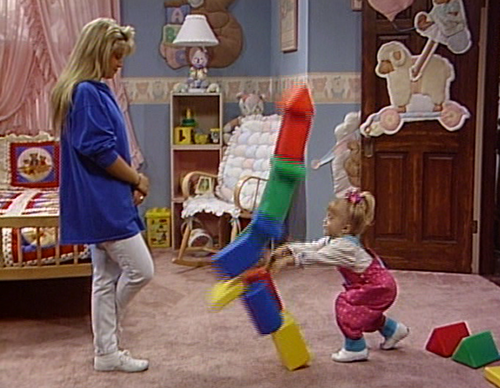 Pre-Credits Gag:  DJ helps Michelle finish her block structure and then Michelle knocks it over and smiles like the devil.  THE DEVIL!!! 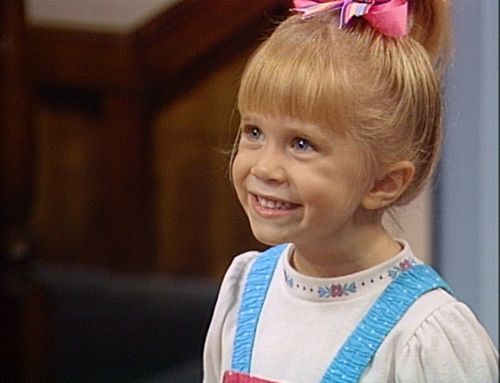 Jesse and Rebecca Donaldson publish their wedding announcement in the newspaper but his name is written as “Jersey” by accident so he gets all pissed.  You’d think that Jesse would be coming to terms right about now with the fact that he will spend the rest of his life playing second fiddle to his way more talented and impressive wife, but I guess he’s not gonna go out without a fight.  After the comedic potential of that little scenario is explored for a few precious moments, Stephanie comes home and interrupts everyone by announcing that she wants to quit the Honeybees.  She refuses to go to the upcoming Honeybee slumber party and runs up to her room like a big fucking baby.  Danny’s like, “oh, she doesn’t wanna go because it’s a mother/daughter thing and her mom lies a-smoldering in her grave.”  Danny then asks Rebecca Donaldson is she’ll take Stephanie and Rebecca Donaldson’s like, “aint no thang, except I’m gonna be in Tahoe that day, but I’ll be back that evening so it’s no big deal.”  Hmm…  kinda makes you wonder why she’d mention it…?  Anyway, Rebecca Donaldson goes up to Stephanie’s room and offers to take her to the slumber party, then they hug, then they sing the Honeybee song. 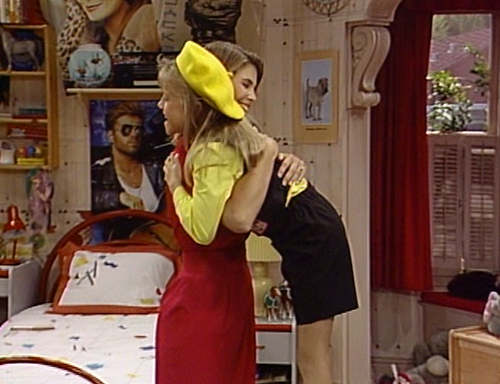 Danny takes the uncles up to the attic, where they’re planning on setting up a work space for their new careers.  The uncles take a glance at all of Danny’s memorabilia that’s stored up there and immediately start pressuring him to sell it.  That’s pretty shitty if you ask me.  The only reason Danny doesn’t have room to store all that stuff is because these 2 fuckheads are using up all the space in his gigantic house.  Why don’t they just use the big check that Danny wrote them last episode to rent a studio space?  Why was a big check not enough for these guys?  Lucky for them, Danny has no self-respect, and is therefore easily persuaded into selling all of his precious memories at a garage sale that upcoming weekend to make room for the uncles’ latest idiotic endeavor.

While Stephanie prepares for the Honeybee slumber party, she finds out that Kimmie Gibbler will be sleeping in her bed as she and DJ have their own sleepover.  Stephanie’s pretty pissed about it but I for one welcome this change.  Oh, if only Kimmie Gibbler would replace Stephanie permanently.  Seriously, that kid’s really worn out her screen time.  I can’t think of a single reason why they shouldn’t give her the Judy Winslow treatment.  Anyway, while all of this is going on, Jesse and Michelle walk into the room for pretty much no reason and explain that Jesse’s gonna take Michelle clothes shopping.  Jesse’s wearing his old leather jacket that we haven’t seen since like the first Season, which seems like some sort of a set-up if you ask me… 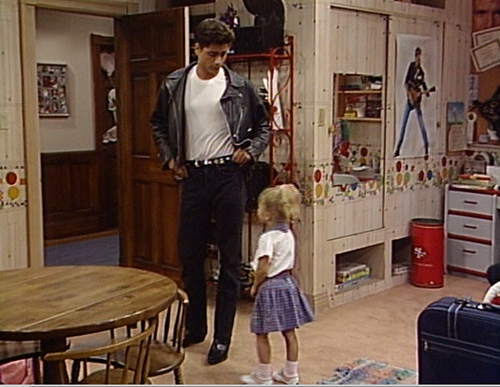 At the garage sale, Joey gives Danny a hard time for charging way too much money for all of his crappy stuff.  Jesse returns from the clothing store with Michelle in biker gear just like his, which makes the audience lose their fucking minds.  I don’t really get this…  I mean, I kind of get that Jesse decides to dress the kid up like himself, but what’s extra weird about it is that Jesse stopped dressing like this a few Seasons ago, and has been sporting a full on Bill Cosby style ever since.  So if he’s that much of a narcissist that he decided to make a little girl emulate his outfits, why’d he go back to the shit he was wearing 2 years ago?  I guess the answer is that in the early 90’s anyone would use any excuse to put shades and a leather jacket on anything, so there’s probably nothing more to it than that. 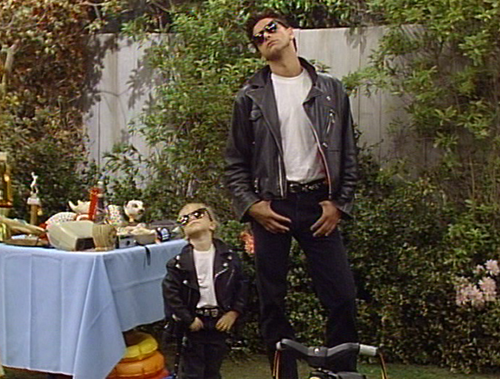 Anyway, Danny is understandably appalled that Jesse bought his child a Halloween outfit to wear to school and makes the uncles watch the garage sale while he takes Michelle back to the store.

Rebecca Donaldson calls up Stephanie to tell her that her car broke down on the way back from Tahoe and she can’t take her to that lame slumber party for nerds.  Stephanie gets all butt hurt and expresses her pathos to Comet while sad music plays and the audience goes, “aww.” 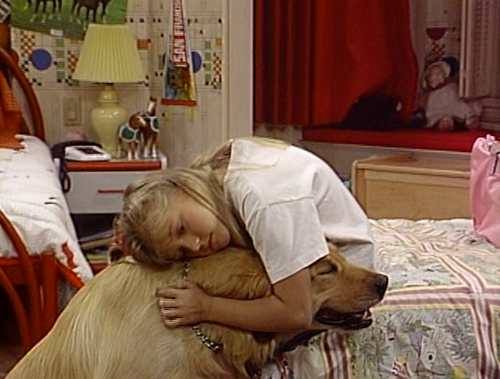 Seriously, if Stephanie just disappeared from the show with no explanation, would anybody mind at all?

After the commercial break, Joey enters the scene and offers to take Stephanie to the sleepover.  Stephanie is pretty apprehensive about it because Joey’s presence in her life is a constant source of humiliation, but since she really doesn’t have any other options, she accepts.

Joey’s arrival at the Honeybee sleepover is pretty ill-received.  I’ve got to say, as much as I’d be upset with Joey’s presence at any engagement I was hosting, I’m pretty shocked at how callous and unaccepting these other Honeybees are.  I mean, come on, Stephanie’s mom is dead.  It’s not like these kids don’t know that.  You’d think that they’d be willing to accommodate the special circumstance of a kid with a dead mom at mother/daughter events, even if it required the inclusion of her annoying, piece of shit uncle.  What really bothers me the most about this situation is that it made me speak out in defense of Joey.

The other weird thing about this scenario is that we actually get to see Stephanie behave the way any kid really would if they had to deal with Joey all the time.  He makes a bunch of lame jokes that bomb with the horde of girls and Stephanie just stands there looking totally mortified the whole time.  Seriously, why isn’t it always like this?

Danny comes home after buying Michelle some cornball ass Little House on the Prairie dress and Jesse tells her that he’s sorry that she has to wear that lame bullshit.  She tells him that she likes the dress way better than that biker gear he bought for her and then Jesse realizes that he was forcing her to dress like he does, just like his own dad used to do to him, and apologizes.  Wow, that’s like the most psychological depth they’ve ever written into this show, and it happened in like 30 seconds of a secondary addendum to a b-plot. 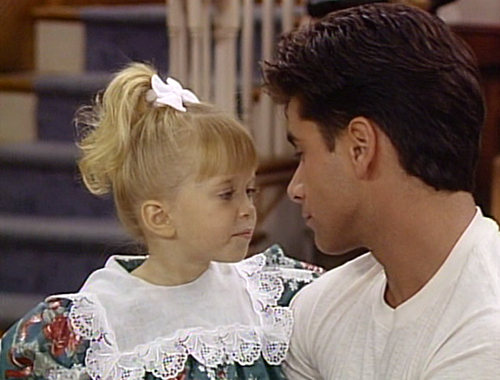 Anyway, Jesse tells Danny that he ended up putting all of his shit in storage, except for a few choice pieces of memorabilia that he left at the full house for Danny’s enjoyment.  This exchange is interrupted by the phone ringing, with Joey on the other end calling to talk about nothing in particular other than it’s time to transition the scene back to the slumber party. 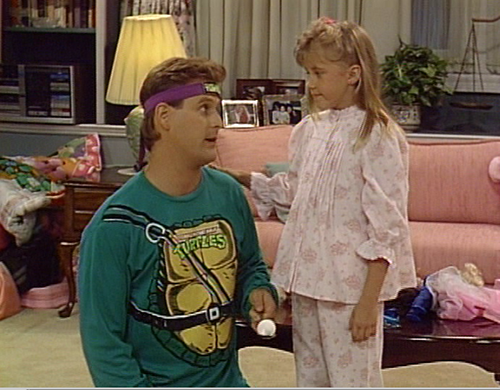 Joey, while sporting some pretty spectacular Ninja Turtle pajamas, loses a high-heels relay race, shaming Stephanie ever further.  I’m not really sure if it’s because he lost, or because he was wearing high heels, or if this is just the point in Stephanie’s life where she finally realizes what a total dipshit Joey is.  Anyway, the focus abruptly shifts yet again as one of the girls calls out that it’s time to play beauty parlor.  Man, this slumber party is intense!  It’s just nonstop group activities, one after another, and each one ends instantaneously when some girl calls out what the next activity is and everyone swiftly assembles for it.

The head mom at the sleepover realizes that it might be pretty awkward to try to play beauty parlor with Joey in the mix and so she tries to suggest a different activity.  The girls are like, “fuck that shit, we wanna play muthafuckin beauty parlor, we don’t care who’s mom’s dead,” and then Stephanie gets all upset and storms out.

Meanwhile, back at the full house, Danny, Michelle and Jesse get down to Danny’s old 8-track recording of “Shake Your Booty.”  Their festivities are cut short by Stephanie storming in, with Joey in tow.  I guess the slumber party was happening in the same neighborhood or something?  Stephanie freaks out and runs up to her room and the dads all just stand around not knowing what the fuck to do.  Danny tries to talk with Stephanie but DJ decides that she’s got some heartwarming, music-inducing words to share. 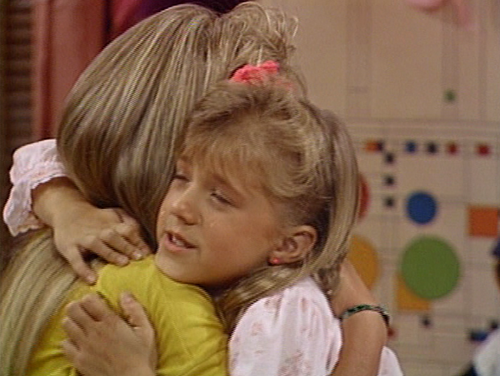 Stephanie cries and says that it sucks dick to have a dead mom and DJ admits that she too suffers from the occasional bout of mom-envy.  DJ says that that she tries to focus less on the fact that their mother is a festering pile of maggot infested flesh and more on the fact that they have 3 idiotic dads who love them.  But… wasn’t that the whole problem to begin with?  How can she tell Stephanie that it’s ok that their mom is dead because they have Jesse and Joey when this entire episode was just one big long example of how shitty that can be?  Isn’t every aspect of their life more awful because their mom is dead and Joey takes care of them instead?  Maybe DJ should’ve just given her some Zoloft instead.

Anyway, Stephanie makes up with Joey right before DJ takes her back to the slumber party. Why didn’t DJ just take her in the first place?

As baffling as this episodes message was to me, the thing that really blew my mind is that the person who really fucked up everything was Rebecca Donaldson.  Up until this point, she had done no wrong.