Pre-Credits Gag:  Rebecca Donaldson tries to convince Jesse to wear a top hat and tails for their wedding and he’s like, “hells naw!”  Michelle is present for this exchange and spews out about a dozen obnoxious one-liners, and yet, somehow, no one punches her in the face.  Seriously, just once, can’t the pre-credits gag be that Michelle gets punched in the face?  I would laugh out loud at that!  I would watch it over and over and feel the most cathartic bliss of my entire life.  All of this shit would be worth it if she got punched in the face just one time.  Why is that too much to ask?  Didn’t they have focus groups that watched this show?  Surely I’m not the only person who was clamoring for this…

Danny answers the back door after the doorbell rings (seriously, what’s up with people coming in through the back door all the time?  It’s even got its own doorbell now?) and greets a woman from his dry cleaning service.  She and Danny exchange a series of overtly-eroticized words about cleanliness and then they start making out.

Wait, what!??!  Danny Tanner is getting’ some!  Right in the kitchen!  I guess he was about due for some action, as this show has only so many premises to pull from and he’s been doing even worse with the ladies than Joey lately.

Anyhow, the dry cleaners name is Cindy and apparently she and Danny have been seeing each other for a few weeks.  Danny suggests that she come over for lunch that weekend with her son, Rusty, but Cindy is hesitant.  Danny’s like, “come on, girl, if we’re gonna be bumpin’ uglies on the regular, you gots to meet my annoying family” and she is so charmed by his rambling speeches and obsessive compulsive cleaning tendencies (all characteristics that she herself shares, because the easiest way to write a love interest for Danny is to have her be exactly like him) that she finally agrees.  Then they make out some more because, in case you haven’t noticed, the people that make Full House hate you.

Danny gets all nervous waiting for Cindy and her son to show up so he makes the family line up in order of height.  They toy with his nervousness by singing “Do Re Me”, which is a real white-bread wholesome family entertainment way of giving someone a hard time.  The doorbell rings and, before answering it, Danny makes one last appeal to his family that he only gets laid like once every other Season and he’s really into Cindy’s well-kempt vagina, so they’d better not fuck this up for him.

Cindy enters with her hideous son, Rusty, and the introductions go pretty much without incident.  As the family sits down to lunch, there is a dispute between Jesse and Rebecca Donaldson over where they’re gonna have their wedding.  Rebecca Donaldson wants to have it in Nebraska because that’s where her family is and Jesse wants to have it (you guessed it!) at Graceland because Elvis is really the only thing that he cares about at all.  You know, you’d think that even having to have a discussion about why you don’t want to have your wedding at Graceland would be enough to make you realize that the guy you’re going to get married to is a big piece of shit.

Cindy gets paged from work (that takes me back) and Danny tries to make some nice small talk with Rusty while she’s on the phone.  Throughout the lunch, the family find themselves subjected to a range of extremely uncreative practical jokes (i.e. the salt shaker has a loose top) all of which are blamed on Joey.  Cindy comes back from her phone call and says that she’s been called in to work and then Danny tries to score points with her by offering to watch her buttfaced son while she’s gone. 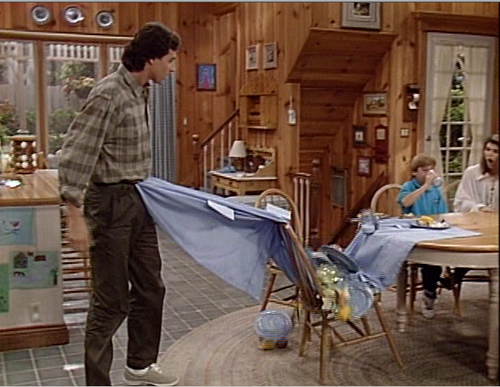 After lunch, the girls take Rusty up to their room and he reveals that he was the cause of all of the practical jokes and refers to himself as “The Rust-man”, which is more obnoxious than the pranks.  The girls decide that, even though he’s a total prick, they’d better not out him for it because it would really impede their dad’s extremely rare opportunity to get some ass.

Danny invites Rusty to play some football in the backyard and Rusty lauds him with false idolization to build his trust.  Rusty then throws the football to Danny in such a manner that it causes him to fall into a big ass puddle of mud.  Naturally, the only action that you’d actually want to see occurs entirely off screen, but at least you get to see the degrading aftermath.

Danny excuses himself to go shower, which unleashes Rusty on the rest of the full house.

Jesse and Rebecca Donaldson continue to argue over why their wedding shouldn’t be Elvis-themed.  The worst part about all of this is that they had the exact same argument like 2 Seasons ago when they were deciding what to do for the holidays.  Honestly, why does she put up with this shit at all?  You’d think that she’d eventually just point out that since she’s the only one with a job she’s gonna have to pay for the whole thing, so what she says goes, but Rebecca Donaldson’s not like that.  Anyway, they eventually agree on serving chicken at the wedding, which is enough of a small victory to clear the air for the time being.  If there’s one thing on Full House that really brings people together, it is a love of chicken.

As they’re “making up,” Rusty barges in and shouts, “tongue town U.S.A.!” which is the most vulgar statement I think I’ve ever heard uttered on a sitcom.  Jesse tells Rusty that he’s on to his bullshit but since Danny wants to fuck his mom so bad he’s not gonna do anything about it as long as he cuts it out.  Rusty agrees but then ties a rope between Jesse and the girls doors, trapping them both in their rooms.  In the hallway, Rusty expresses his satisfaction with himself by doing a little head shake and then a leg kick as he walks away, and I’ve gotta say that this kid is just about the most uncharismatic performer I’ve ever seen on tv.  All of his deliveries and physicalities are staged as if he’s really embarrassed to be doing them, and although I can’t blame this kid for one second for feeling this way, I have to say that I kind of resent him for making the regular cast look good.  I mean, I know that they’re all completely terrible, but at least they’re dedicated to it.

Rusty’s next victim is Joey, which confirms that this episode is structured like a sort of a G-rated slasher flick, where instead of the victims being brutally murdered (oh, if only!) they are subjected to really tame pranks.  Before falling prey to Rusty’s misdeeds, Joey makes Rusty the victim by subjecting him to his shitty impressions.  This brings us Joey’s first ever “Mr. Woodchuck” impression, which those of you familiar with this series will remember as something that will inspire immeasurable vile hatred later on, but as of now there is no puppet to represent Mr. Woodchuck, just Joey’s stupid face and his awkward woodland creature posture. 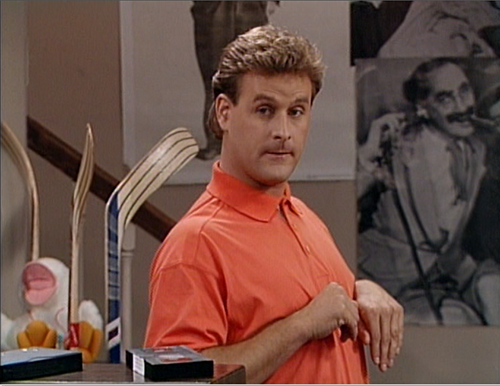 Anyway, Joey tries to force Rusty to watch shitty tapes of his terrible impressions and then discovers that Rusty’s taped them over with footage of himself making farting noises.  How did he even have time to do that?  Joey gets pretty pissed even though Rusty making farting noises is way more watchable than Joey’s terrible Bob Hope impression.  Joey should be taking notes. 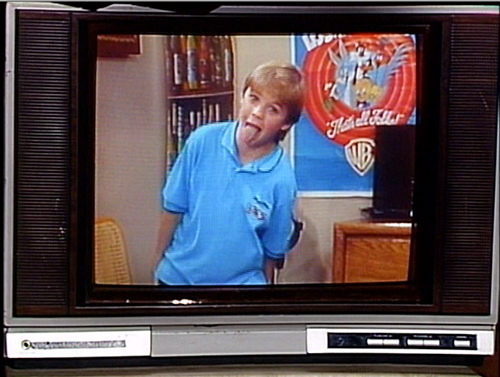 Next, Rusty tricks Michelle into looking at his kaleidoscope that has shoe polish on it, then he throws the family’s pot roast dinner into the living room so Comet will chase it while he’s all covered in soap because the girls are washing him.  This causes the whole family to convene in the living room and acknowledge to Danny that Rusty is a deplorable asshole.  Danny refuses to believe that someone so terrible could come out of such a top-notch vagina but then he discovers that Rusty switched his shampoo with green hair dye.  Really?  Does this kid have, like, godlike powers or something?  How did he pull all this shit off?  And how did Danny manage to dye all of his hair green and not notice at all?  I mean, really?  I can see pouring it onto your head without knowing, but he had to have set it and then rinsed it out to have gotten a dye job like that.

Danny finally confronts Rusty and he’s all, “I thought we were gonna be homeys,” and then Rusty’s like, “you don’t give a shit about me, you just wanna bang my mom,” and then Danny’s all,”that is true.”  Then Rusty says that his parents are gonna get back together so Danny’s wasting his time and then the music comes on as Danny explains that he understands how Rusty feels because his parents are divorced, too, but no amount of sympathy is gonna keep him from fucking his hot mom.  The most amazing thing about this scene is that Rusty actually deflects the music, as his shitty attitude proves too powerful for the healing powers of that gentle melody.

Cindy comes back to the full house and Danny tries to show what a cool guy he is by covering up all of Rusty’s shenanigans.  Cindy discovers Danny’s green hair and is overwhelmed with shame, going so far as to say that she’ll understand if Danny doesn’t want to see her anymore.  Danny’s like, “no shitty kid is gonna keep me from pursuing our disturbing cleaning fetish,” and then everyone hugs.

As an epilogue, there’s a scene where Rusty enjoys root beer floats with the girls and then they all spray him with whipped cream as a good-natured revenge.  This conclusion conveys a sense that Rusty might be a recurring character, and although I saw so many lame characters come and go in a single episode in the earlier Seasons, I have to wonder if we haven’t seen the last of Rusty’s stupid buttface.