Pre-Credits Gag:  Yeah, I know.  Anyhow, Joey gets all pissed about a call that’s made while he plays baseball in the backyard with the girls.  After a shouting match, he quits the game, but is then coerced into staying when he threatens to take his ball and bat with him. 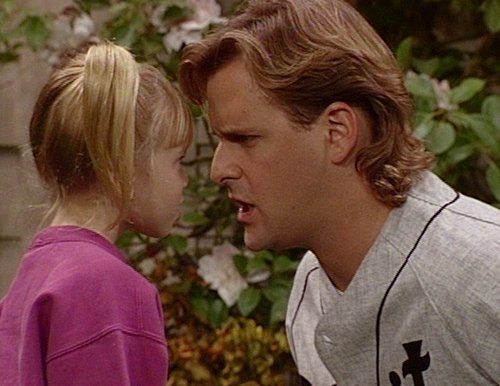 As Danny compulsively cleans the plants in the backyard, Michelle pulls up on her bike and complains that she was mocked by some other kid for using training wheels.  She tries to talk Danny into teaching her how to ride without them but he says he can’t do it until tomorrow because Vicky’s coming over and he’s gonna try to slip her the ol’ salam.  Shocked by this rare lack of accommodation, and unable to wait for a period of hours before a request is granted, Michelle turns to Joey for instruction. 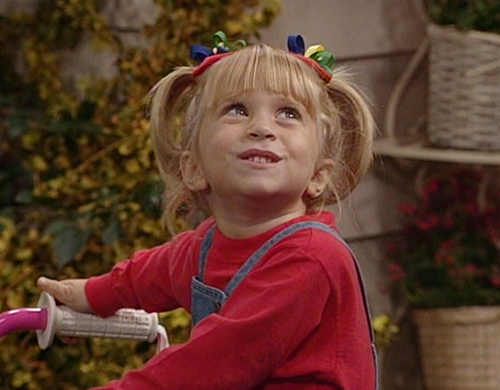 Meanwhile, Jesse and Becky spend time with their new twin potatoes and I have to point out that them being parents is FUCKING BORING.  All we’ve seen so far are a bunch of drawn-out scenes of them talking to non-responsive infants while the audience goes “aww” at random intervals.

In this latest adventure, they decide to take the babies on a car ride.  Jesse wants to go to the Harley Davidson shop but Becky wants to visit her Aunt Ida, a petty disagreement that harkens back to their pre-baby days.

As DJ and Stephanie lay around apathetically and watch music videos, as all kids did in those days, Danny comes in and tells them to get the fuck out because he’s gonna try to bang Vicky in a minute.  The girls mock and prod Danny as he exudes insecurity over the brief romantic exchange he and Vicky shared at the end of the last episode.  Apparently they’ve been working together all week but neither of them has addressed what happened.  Vicky shows up and then the girls prey on Danny’s state of panic because they hate their father.

After the girls leave, Danny stammers and prances around and then he and Vicky sit down to select next weeks guests on Wake Up, San Francisco, because I guess that’s part of their job requirements.  Vicky tries to ignore Danny’s uncomfortable lust but then she slips when she refers to Henry Kissinger as “Henry Kisser.”  Although I don’t think that Henry Kissinger was a popular guest on morning talk shows in the 90’s, or any era, really, I’ll forgive it because of the delightful wordplay it brought us.  Anyway, Vicky tells Danny that she thinks that they should forget the kiss from last episode but then they continue to bask in one another’s awkward sexual tension.

Meanwhile, in a rare use of on-location shooting, Joey teaches Michelle how to ride a bike in the park.  He makes her wear a whole bunch of padding and then she gets all freaked out about hurting herself, so Joey demonstrates how easy riding a bike is. 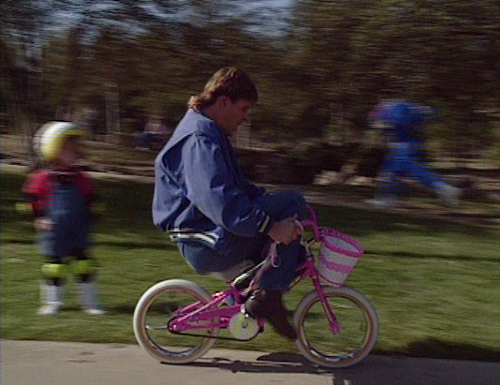 Every once in a while this show does me a solid.  There was that time that Joey got hit in the head with a coconut, all those times Kimme Gibbler dissed DJ in front of all of their friends, or even that glorious moment when Stephanie got hit in the face, but the most cathartic moment of all may be when Joey teaches Michelle how to ride a bike and she falls in the bushes. 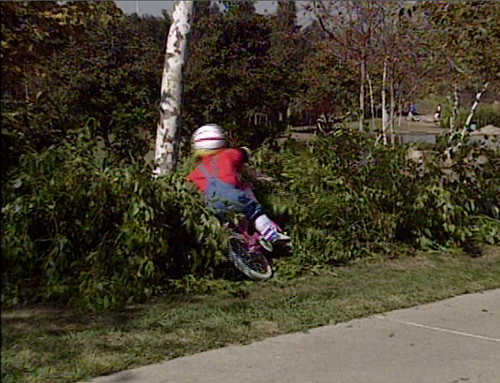 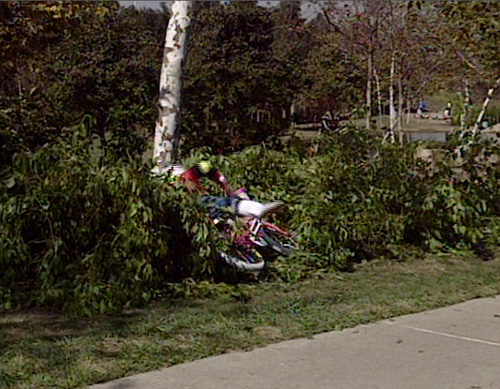 I know it would have been better if the bushes were full of knives, or if she was ripped apart by wolves after she fell in the bushes, or if Joey committed suicide after she fell in the bushes, but I guess I’ll take what I can get.  And I know that that’s probably a dwarf stunt double, but, hey, I’m willing to suspend disbelief a little in this scenario.  I’ll tell you one thing, tho.  After Michelle falls in those bushes, she FLIPS THE FUCK OUT! 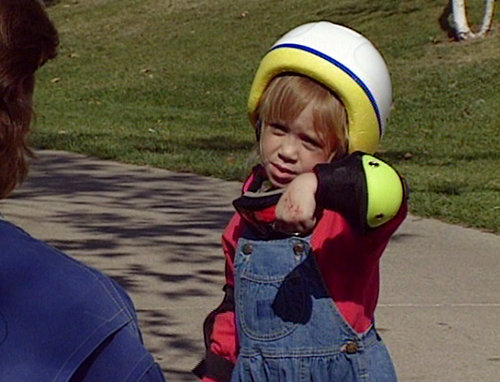 It’s awesome that we get to see her bloody scrape.  Again, pools of blood gushing out of her because of wolf bites would have been the ideal scenario here, but if a little bit of blood is all I’m gonna get, I’ll take it.  Plus she gets super pissed at Joey, which is awesome.  She tells him that she’ll never trust him again and then walks off, leaving him behind in the park.  How’s she gonna get home? 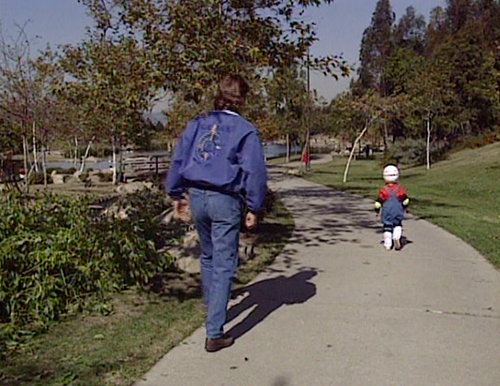 Back at the full house, Michelle is so pissed at Joey that she can only talk to him while he does his annoying Bullwinkle impression.  Why is that better?  She starts to loosen up but then he sprays her cut with disinfectant and the stinging sensation gets her pissed all over again.  And so this drama between the two worst characters continues. 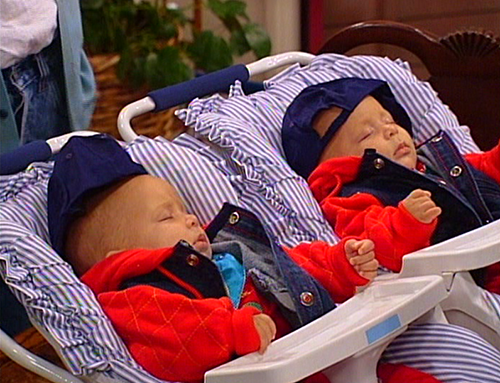 In preparation for the trip to Aunt Ida’s, Jesse passive aggressively wears his hat backwards, a move that sure to get Aunt Ida all riled up.  He even goes so far as to put backwards hats on the babies, who sit there, expressionless, while the audience goes “aww.”  Jesse and Becky then spend several more minutes overpacking for the trip because that’s the way new parents are, you guys.

Danny and Vicky continue to work together, struggling desperately to ignore their raging boners. They finally address what’s happening and agree that they shouldn’t get into a relationship because they work together, and then Vicky says, “and who knows where I’ll be after Becky comes back to Wake Up, San Francisco,” and then there’s a little pause, which is clearly Vicky putting the idea into Danny’s head that they have to kill Becky.  Maybe Vicky won’t be a completely 1-deminsional character after all.  Anyway, as soon as they agree not to do the nasty, they immediately contradict themselves by furiously making out on the couch, with heavy petting and everything. 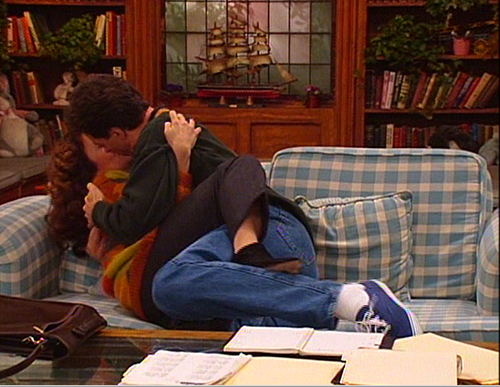 After Danny finally gets some action for like 5 seconds, DJ and Stephanie come back to the full house and immediately blow up his spot.  They exclaim, “make out, San Francisco!” and when they’re expelled from the room, Stephanie says, “have fun playing tonsil hockey.”  Man, when I first started this blog, I really didn’t know what I was getting into.  Back when I was watching the first Season, I couldn’t imagine how this show could get any more obnoxious, but it’s actually managed to exponentially expand it’s intolerability throughout the series in such a manner that would be impressive if it wasn’t so fucking unpleasant.

Anyway, Danny and Vicky finally agree after one episode and no character development to begin a sexual relationship and he decides to give her a little preview of what to expect from it by taking her out for vanilla frozen yogurt. 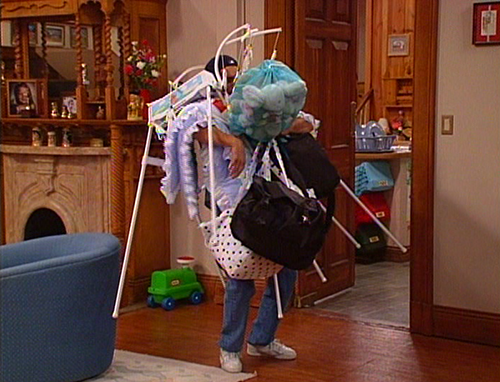 When Becky and Jesse finally get all the shit they packed to the front door, the doorbell rings, revealing a surprise visit from Aunt Ida. Oh!  It was all for nothing!

DJ and Stephanie try to trick Michelle into learning how to ride her bike by convincing her that they just want a photo of her sitting on it but she figures out what they’re doing and gets all pissed.  Joey intervenes and tries to bribe her into learning with a VHS copy of The Little Mermaid, but even that cinematic masterpiece isn’t enough to persuade her.  Joey finds himself at a loss until the music comes on.  That sweet, mood altering music.  Joey says some inspiring words about keeping at something even when it’s hard and Michelle is finally manipulated into giving riding a bicycle another shot.

So then they go back to the park and she rides her stupid bike and doesn’t even get hurt this time.  Joey congratulates her for doing it all by herself and then there’s this really creepy close-up of her saying, “uh-uh, Joey, I did it with you.”  I don’t know why exactly but that shit gave me hives. 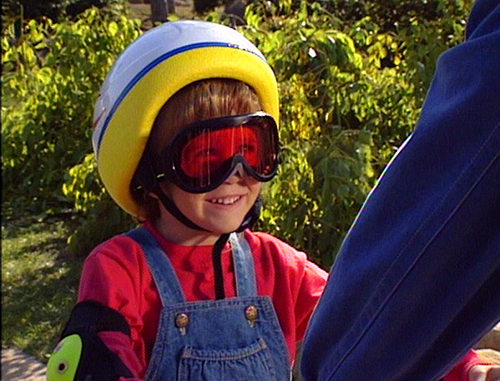