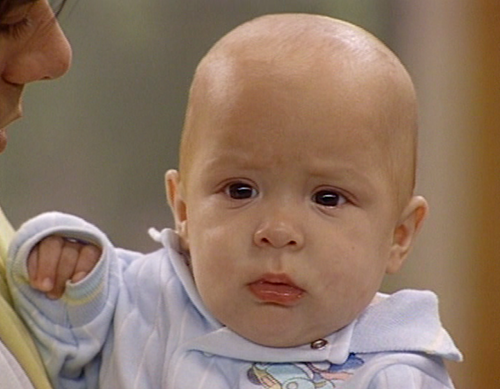 Pre-Credits Gag:  Becky and Jesse pit the twins against each other in a speed burping match but then the old baby, Michelle, comes in and beats them both.

Becky prepares the twins for a trip to Aunt Ida’s, a character who didn’t exist before the previous episode but was such a hit that they had to at least reference her right away.  Meanwhile, the dads all gear up for a hockey game because they want to hang out like old times before Aunt Becky showed up and spoiled their sausage party.  I just realized how much less gay things have been in the full house lately, and it made me sad.

Before all the grown-ups head out, Danny thanks DJ for staying home on a Saturday night to watch her sisters and being all responsible and shit.  DJ says it’s no big deal because she thought she had a date with a hot piece of man-meat named Steve but then he never called.  Danny expresses no interest in DJ’s dating life, or lack thereof, and only pauses to remind her to help Stephanie with her book report and not to let Michelle outside because she has the sniffles.  Plot points! 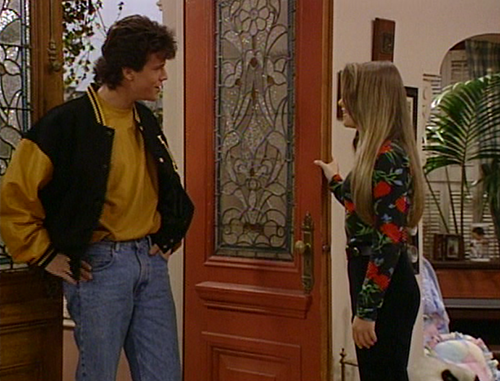 After everyone leaves, the doorbell rings, revealing Steve, probably the last significant cast-member to join the series.  I didn’t expect him to show up so early.  Does that mean that absolutely nothing is going to happen over the next three Seasons? Anyway, Steve explains that he sent a note about their date but it wasn’t delivered by one of their friends, but he still wants to take her to the back row of the movies for some serious finger-banging.  DJ recognizes that this is probably her only chance ever to finally get some action so she scrambles to figure out what to do with her two ugly sisters.

DJ tells the girls that they have to come with her on the date and Michelle immediately starts giving her a real shitty attitude.  What is it with this fucking kid?  Everything she says is so laced with hostility.  She’s constantly jutting her face out and making cutty ass remarks, and yet, no one ever gets pissed at her.

DJ eventually convinces her sisters to come along but then further complication arise when Steve wants to see a PG movie.  I’m not even kidding, Stephanie totally refuses to go to a PG movie and forces them to find something with a G rating instead.  Luckily for DJ, Steve is pretty unphased by this, as he’s pretty indifferent about what the movie is, just so long as he’s finger-banging DJ the whole time.

Things get even more complicated at the theater as Stephanie and Michelle somehow figure out a way to spend all of their money at the concessions stand before they buy the movie tickets.  How is that even possible?  You can’t get to the concessions stand if you don’t have a ticket.  And even if it was possible, why did DJ give them all of the money she had?  Bringing this string of convenience-based, logic-free story elements to a climax is the sudden revelation that, hey, why the fuck not?  Kimmie Gibbler works at this theater.

DJ talks Kimmie Gibbler into sneaking her ugmo sisters into the theater but then Stephanie wants some sort of an explanation for why they don’t have ticket stubs.  I don’t know why they can’t just tell them that Kimmie Gibbler can get them in for free because she works there but instead she explains that they don’t have to pay because Stephanie’s the 1,000,000th customer.

DJ makes her sisters sit behind her and Steve inside the theater, which is totally inopportune for finger-banging.  The girls immediately start being loud, obnoxious assholes inside of the theater so DJ moves them to the back row.  Immediately after their relocation, some creepy guy comes up and starts talking to them and for a second I thought this was going to turn into a very special episode but he’s actually an usher checking people’s ticket stubs, which totally happens all the time at the movies. 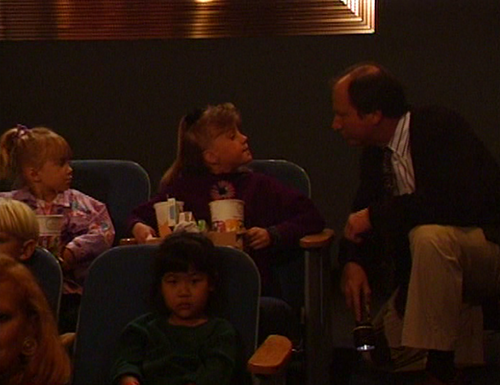 DJ doesn’t even notice because she’s totally tongue kissing Steve!  Damn, I never thought it would happen.  No wonder she keeps this guy around for like the rest of the series.  DJ’s moment of glory is short-lived, however, as Kimmie Gibbler interrupts them seconds before the commencing of the finger-banging to let them know what happened to the girls.

Stephanie totally narc’s on Kimmie Gibbler when the usher guy takes them into some sort of an office for questioning.  DJ quickly shows up and concocts and elaborate story about the girls being notorious for sneaking into the movies and she lets the usher/manager guy know that she’ll be alerting their parents as she whisks them off.

Back at the full house, DJ conspires with her sisters to create a fake story to tell Danny about what they’ve been doing all day.  It takes some time for DJ to coerce them into going along with such shameless untruths, but they eventually comply, leaving their only concern to be whether or not Michelle’s feeble mind can maintain the ruse.

The dads all come home and get into a heated argument about how bad they sucked at ice hockey.  Their rage soon turns to lust, and shortly thereafter Aunt Becky walks through the door to discover them all writhing in a pile on the floor.  Oh, glory be!  The overt homosexuality makes a triumphant return!

Danny comes up to the girls’ room and offers DJ some heavy-handed praise for how mature and responsible she is for taking care of her sisters, which prompts a voice-over track of DJ’s guilt-ridden inner thoughts. 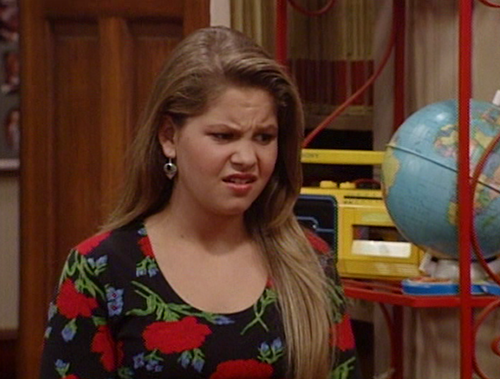 DJ sweats it out while the girls deliver their false stories but they’re all actually effective.  After buying all the stories, Danny goes into a lengthy praising of all of the girls until DJ is overwhelmed with guilt and confesses.  Danny gets really super pissed and dishes out justice by grounding all three of his naughty daughters.

After Danny leaves, the girls ask DJ why she pussied out on their brilliant ruse.  DJ explains that her conscience overwhelmed her and Michelle is perplexed because it’s pretty obvious by now that she doesn’t have one.  The music comes on and DJ proclaims that she’ll be spending more quality time with her sisters in the near future, which seems like a pretty tacked-on final sentiment if you ask me. 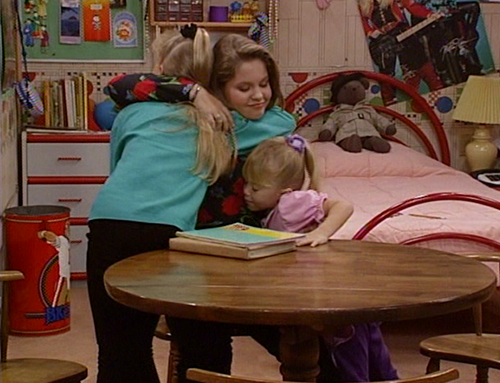 Firsts:  Steve, DJ gets some action