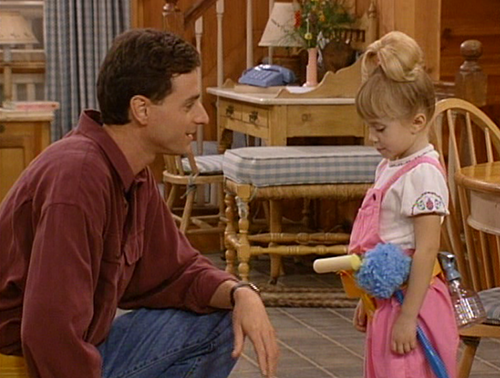 Pre-Credits Gag:  Danny makes Michelle put on a utility belt outfitted with cleaning products and tells her that he loves her more than her sisters because she’s more susceptible to the influence of his insane cleaning habits than they are.

Becky gets all excited when one of the babies starts crawling and calls Jesse to witness this incredibly banal scene.  The baby stops crawling the second Jesse shows up and then every time he turns his back they cut to a pre-recorded shot of the baby crawling until Jesse looks at him again.  It’s like those old Warner Brothers cartoons with the singing frog, except not funny or creative or at all unexpected.  Jesse remarks that, “the kids a potato,” which kind of blew my mind because that’s exactly what I’ve been saying in these shitty reviews, and I was being a jerk.

Danny has Michelle round up all the denizens of the full house for Spring cleaning day.  Everyone bitches and moans as Danny assigns them specific cleaning duties, except for Michelle, who gleefully accepts the job of “Daddy’s special helper.”  After he gives her the job, she looks at the rest of the family and says, “I’m Daddy’s special helper!” and it really seems like she’s gonna start hissing or her heads going to spin around or something.  I don’t just hate this child any more.  I fear her.

As the family woefully carry out their cleaning duties, Kimmie Gibbler walks through the front door and I was like, “damn, girl, whatchu wearin’?”

Kimmie Gibbler invites DJ to go ogle some boys at the car wash but DJ explains that she’s trapped under Danny’s fascist cleaning regime.  Everyone complains some more about what an obsessive weirdo Danny is about cleaning and then Kimmie Gibbler looks at them and makes the second startling insight of the episode by saying, “what’s wrong with you people?  How can you get this house any cleaner?”

Danny and Michelle enter the room to hand out fresh sponges but everyone tells them that they’re fucking sick of cleaning and are gonna call it a day.  Danny starts inspecting all of their cleaning jobs and Michelle chimes in after everything he says, which is a bit that gives me the strength to overcome the fear and go back to just regular ol’ hating her again.

Danny gives everyone a motivational speech to keep them cleaning and entices them with a promise of new shelf paper in their closets as a reward.

DJ calls an assembly of everyone but Danny into her room and then they all start bitching about him and, for the first time, approach some sort of legitimate recognition of how fucked up someone on this show actually is.  Everyone really unloads, too, and I have to say that it was pretty cathartic to see.  They even point out how badly Danny is fucking up Michelle with his creepy nonsense.  Don’t get me wrong, it would have been way better if they’d all murdered him at the end of the scene or, better yet, murdered Joey, but I’ll take whatever display of negative enforcement I can get.

So then after everyone leaves, it turns out that Danny was installing shelf paper in the closet the whole time and overheard all their shit talking.  Aww.  I don’t know why the fuck he didn’t say anything and instead stood there silently in the closet while they all talked about him, but, still, aww.

Everyone lines up in the kitchen for inspection and then Michelle brings Danny his white gloves and I have to say that this scene could be pretty interesting if taken out of context.  Danny quietly states that their will be no inspection and then excuses himself to go do some thinking in the mountains while sad music plays.

Cut to some amazing stock footage of a mountain.

Danny rides a donkey named Norman up the mountain so he can see the matte paintings and gain some perspective. 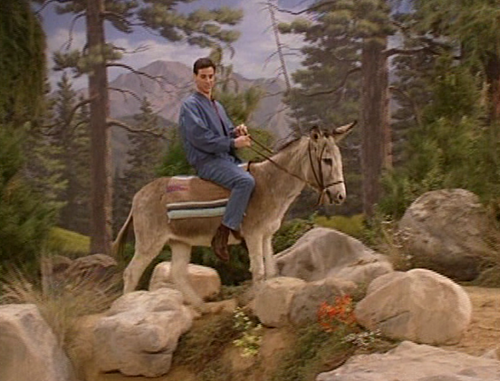 This episode has really been cranking out the self-aware meta-dialogue, seen once again when Danny stares off into the distance and asks, “how did I get so messed up?”  Yeah, seriously, how?!!?  He decides to blame it all on his mother and then realizes that he’s perpetuating a cycle of obsessive compulsive cleanliness by fucking up Michelle.  Danny decides to usher in a new era by embracing dirt and then he yells like Tarzan.

Jesse sees the babies crawl and that’s the end of the Jesse-not-seeing-the-babies-crawl subplot. There’s not even like a zany twist or anything.  He’s just standing there and then Becky tells him to look because they’re crawling and then he does.

Danny comes home covered in dirt and smelling like shit and starts making a big mess.  See, he couldn’t just come home and stop being such an asshole about making everyone clean the gutters and shit, he has to go dramatically, drastically towards the opposite end of the spectrum by being filthy and throwing potato chips all over the floor.  Everyone stands around gawking, utterly amazed by Danny’s radically altered personality as he drinks straight from the milk carton.

Things quickly graduate to utter absurdity when Joey draws a smiley face on the refrigerator with chocolate syrup to test Danny’s new attitude.

Danny responds by drawing hair on the smiley face to show how much he does not give one fuck.

As if all this wasn’t ludicrous enough, Kimmie Gibbler starts smearing the syrup all over the place and then leaving chocolate syrup handprints on everything. 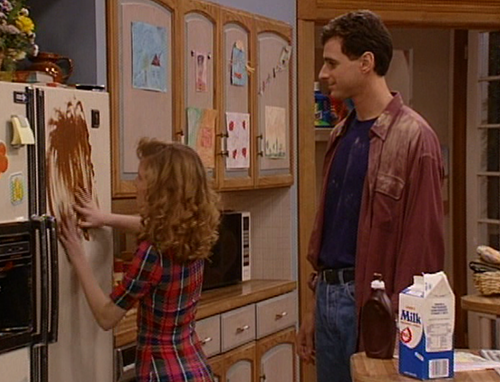 All Danny does in response is eat ice cream out of the container, which makes the family all stand around looking concerned as gentle music plays.

Danny runs upstairs and starts fucking up his room and then the rest of the family come in and tell him that they’ve deduced that he overheard their shit-talking session.  They all tell him they’re sorry and hug him and then Danny says that he’s going to try to find a balance between being a creepy clean freak and a fucked up slob, which concludes that this really is the most enlightened episode of this show ever.  Oh, moderation, how seldom it is that you rear your head in the full house!

Stephanie asks Danny to have a special talk with Michelle because even though Danny’s finally achieved some self-awareness, he’s already instilled psychological damage onto his ugliest daughter.

Gentle music plays as Danny tells Michelle that she doesn’t have to be a fucked up weirdo about cleaning anymore, but there’s already so much shit wrong with her that it’s hardly going to make a difference.

In conclusion, I would just like to say that when Newsradio did this episode and Dave overheard everyone ragging on him, he got called out on being an eavesdropper at the end.

Firsts:  someone’s fucked up behavior is recognized as an actual problem