Season 6, Episode 5, “Lovers and Other Tanners”

Pre-Credits Gag:  Michelle plants seeds into milk cartons and then she plants some M&M’s because she doesn’t understand that it wont work.

As Joey arrives downstairs fresh and prepared for his first day as a radio DJ, he finds that Jesse has come down with a bad case of having-a-job-itis.  His aversion to working is so great that his body has virtually shut down, and yet he seems determined to show up to his first day anyway. 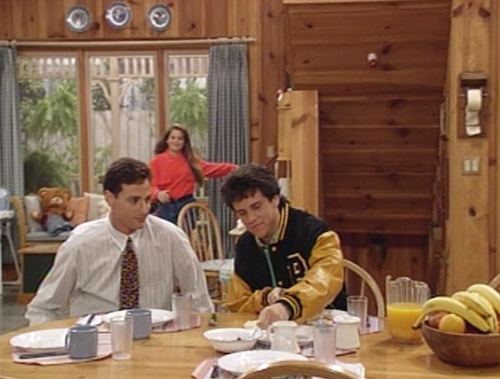 Steve comes in and immediately starts shoveling food into his face, his sense of entitlement making him a natural addition to the full house.  Danny continues to express hostility towards Steve as he jealously vies for DJ’s attention and then he busts a cock-block move by asking her to pick Michelle up from her Honeybee meeting that afternoon so he can meet Vicky at the airport.  He then interrogates her about how she did on her History test and gets all bugged out when she says that she got a C.  Damn, you guys, how does Danny Tanner keep such amazing tabs on his children’s lives?  I always assumed that he neglected the shit out of his two older daughters by focusing all of his attentions on Michelle, but apparently he’s totally on top of all of his girls’ schooling and social engagements.  I guess he’s able to pull this off because he puts such little effort into his morning show host job.  Anyway, Danny reminds DJ that if she can’t keep her grades up she’s not allowed to get a part-time job so she can buy a car and then DJ says that she doesn’t give a shit because Steve just drives her everywhere now.  I can’t imagine why Danny’s promise of further responsibilities didn’t persuade DJ to study harder.  Anyway, Steve excuses himself and then Danny has a little talk with DJ about how he’s concerned that she’s letting Steve becomes too big a part of her life, which is clearly motivated by his own desire to dominate it himself. 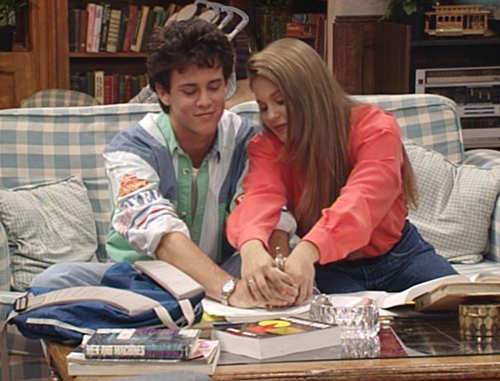 Things get pretty hot and heavy as Steve and DJ do their geometry homework in the living room.  Becky walks in with the twins, who stand there while a really conspicuous voice-over of them saying, “uh-oh” at the sight of Steve and DJ making out plays.  Becky awkwardly leaves them alone to enjoy their family-friendly teenage romance but then DJ starts talking about love and shit.  Steve starts frantically erasing his math homework and I thought that he was venting his sexual frustration because of the frigid morals DJ was raised with but he’s actually just expressing his anxiety before telling DJ that he loves her.  DJ is deeply touched and then the music comes on as she tells him that she loves him, too.  Hey, we’re like 7 minutes in and the music came on?  I guess this is a pretty big moment.  I mean, even DJ’s gotta at least let Steve touch her boobs after he dropped the L bomb.

Steve’s pipe dreams of second base are blown away when Danny appears at the front door, having just picked Vicky up from the airport.  He’s already got a shitty enough attitude about DJ and Steve being alone together, but then he gets super pissed when he finds out that DJ never picked up Michelle from her Honeybee meeting.  Apparently Stephanie found her and brought her back.  Thanks a lot, Stephanie.  If you hadn’t intervened, she could have been kidnapped, or even murdered.  That’s just one more reason I hate your guts.

Steve leaves for wrestling practice and Vicky leads the two youngest, ugliest girls into the kitchen so Danny can yell at DJ.  He lectures her about what a fuck up she’s been since she started going out with Steve and then he straight up loses his mind when she defends herself by saying that they’re in love.

Danny’s jealous possession of DJ reaches its peak when he forbids her to see Steve.  DJ takes her first step into womanhood by telling Danny that he can suck a fat turd because she’s gonna see her hungry wrestling team boyfriend whether he likes it or not.  That’s not to say that she’s becoming a woman in a sexual way, because she’s still never gonna give it up to Steve.  Seriously, never.  But she is going to keep hanging out with him to do homework and eat chips and stuff, and she’s willing to run out of the full house to prove it.

Danny shows up at Steve’s wrestling practice to ask him if he knows where DJ ran off to.  Steve is pretty friendly and cooperative but Danny still tells him that he’s not allowed to see DJ anymore.  Steve pleads with him but then has to tend to his wrestling practice obligation so his coach wont get all pissed.  Danny, being a denizen of the full house, is totally unwilling to wait until Steve has time to talk, and so he convinces Steve’s wrestling partner to switch out with him.  The staging of this is particularly awkward because Steve is supposed to be unaware of what’s happening but the exchange between Danny and the other kid isn’t really that brief, so Steve’s just kind of hanging out in his wrestling pose looking down at the ground for a really long time.  And that’s not to even mention the most fucked up part about what’s going on here, which is that a god damn 35 year old man just walked into a High School wrestling practice and started wrestling one of the kids.  Grown men are seriously not allowed to do that. If Steve’s wrestling coach is supposed to be keeping such a stern eye on him, why would he allow this to happen?

No fooling, I think that Steve and Danny’s serious talk over wrestling has got to be the most preposterous thing that’s ever happened on this show.  Even more so than when Jesse went skydiving before his wedding and then landed in that truck full of tomatoes. 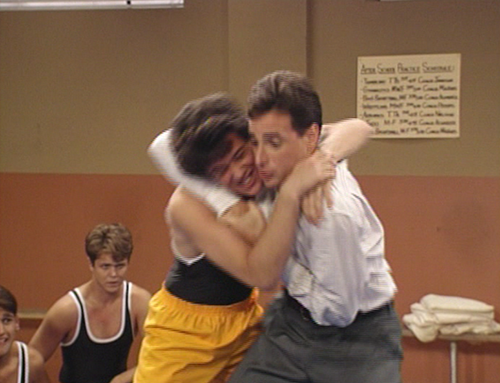 Danny does a lot better than you’d think, but in the end he still gets pinned by Steve, and just as DJ shows up, too.  Danny somehow manages to act like he wasn’t just totally robbed of his manhood and maintains that Steve and DJ are forbidden to see each other.

DJ is like fuck that shit but then Steve is reasonably put off by DJ’s shitty overbearing family and tells her that it’s over.  I can’t blame him for fleeing that scene but I also can’t help but notice that he just defeated Danny in a physical challenge and therefore according to the laws of nature should be the new ruler of the full house.  That’d make for a better show, I bet.  Actually I guess it’d be about the same, except he’d make everyone bring him food all the time.  Anyway, whatever, but one last thing I’ll say about this scene is that it’s pretty weird that Steve walks out of the gym after breaking it off with DJ because it’s his wrestling practice.  Shouldn’t they be the ones that have to leave?  But, no, they’re just standing there, looking sad while the music comes on yet again, ruining the wrestling practice for everyone.  Damn, you guys, that was the most preposterous scene ever.  There wasn’t one single thing about it that wasn’t ridiculous.

Let’s bring a little levity to this otherwise somber drama by watching Jesse totally fuck up on his first day as a radio DJ.  Apparently he took a shitload of cold medicine before the show, leaving Joey to handle everything while he sleeps.  I feel like I’ve been ragging on Jesse for his contemptible lack of a work ethic for years now, and yet here we find ourselves, at a brand new low.  Not only is he sleeping through his very first day at work, but he pawned all of his responsibilities off on Joey, the sorriest piece of shit on Earth.

As Joey struggles to cover for Jesse, Becky stops by the show, along with Michelle and Stephanie, because why not?  Becky wakes Jesse up by making out with him and then he makes his first contribution to the show by introducing his stupid obnoxious family.  Wow, you guys, the Rush Hour Renegades show is off to a hell of a start.

Danny sits in the backyard, thinking hard about how he’s going to prevent DJ from growing up or having a life of her own.  A chastity belt?  Maybe some sort of enchanted tower?  Vicky comes out and is like, “Jesus Christ, Danny, I know that I’m painfully uninteresting and everything, but I’m only on this show every couple of episodes.  Can’t you stop running your daughters life for like 30 seconds so we can get some Chinese food or something?”  Danny says that DJ’s just some dumb ass kid who doesn’t know shit about love and then Vicky starts asking him about their own relationship.  The music comes on, which makes Danny realize that they are in love, a revelation which leads to some really awkward kissing and then some non-sexual hugging that’s slightly less awkward to watch.  So there you go, guys, Danny and Whatsername are in love now.

Danny goes up to DJ’s room and tell her that since he’s in love with Vicky now he can relate to DJ’s feelings so he’s going to try to be less of an asshole, and then the fucking music comes on AGAIN!  That’s like 4 musics!  There’s no way that’s not a record.  That’s like twice as many as the most musics from before.  Anyway, Danny says that his homosexual wrestling match with Steve was a sort of rite of passage, so he’s willing to accept his as a regular Full House cast member, and then they hug and the audience goes “aww.”

Then Danny drops some actually practical dad knowledge about balancing your life and not letting no man tell you how to be and then DJ and Danny talk about how rad it is to be in love.  In the final moments, they hug about love and then the audience goes, “aww” again, all while the music plays.

72 Responses to Season 6, Episode 5, “Lovers and Other Tanners”