Pre-Credits Gag:  Michelle makes Danny a gift and he can’t figure out what it is.  It turns out to be a bird feeder. 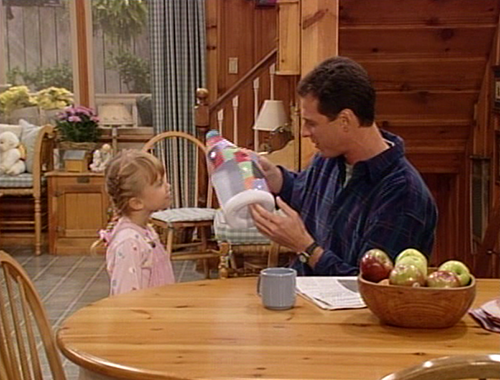 Wake Up, San Francisco features two twin old ladies playing harmonicas in order to promote the upcoming Twin Expo, where Danny will be MC’ing the “favorite twins” competition.  Once the show wraps, Jesse walks on set to meet up with Becky and he tells Danny that Vicky called the full house earlier to say that she’ll call him later and that she’s doing a story on the Chicago Bears where she’ll be interviewing them in the locker room.  I wonder why she felt the need to include that last detail when she left the message with Jesse, especially since it immediately convinces Danny that Vicky is about to get gang banged by the Chicago Bears.

Becky tells Jesse that her cousin Dick is coming to town with his wife so they can enter their twin daughters in the favorite twin contest.  Jesse says that he hates Dick’s stupid guts but Becky tells him tough shit because they’re all having dinner together that night.

Stephanie asks DJ and Steve what to do about this boy at school who’s harassing her and they say that he probably likes her and she should call him.  It sounds like this boy is being pretty abusive, and I get how they reach the conclusion that he’s doing it because he likes Stephanie and doesn’t know how to express it, but I don’t really understand why they would encourage her to try to get into a relationship with this problematic young man.

Cousin Dick arrives at the full house with his family and… hey, wait a minute, that’s not Cousin Dick, that’s Cousin Larry!  From Perfect Strangers!  That’s too bad that he’s just guest-starring and it’s not an actual crossover.  Even if it was, it wouldn’t be as rad as the time that Urkel came to the full house.  Man, that was the only good time I ever had watching this show.

So Cousin Larry’s whole thing is that he’s rich and he thinks that Becky is too good for Jesse, which is of course totally true.  Cousin Larry is introduced to the whole Tanner family and then he sneers at the fact that Becky and her family all live up in the attic, which is also an agreeable sentiment.  Seriously, why the fuck do they all live up in that attic?  Becky is a fucking tv talk show host, she does not need to be living like Anne Frank.  The next thing that Cousin Larry is judgmental about is the fact that Jesse is in the process of earning his High School diploma, and, again, I cannot argue about this not reflecting well upon Jesse.  Cousin Larry is supposed to be some sort of snide antagonist, but he’s actually making a lot of astute observations.  I feel you, Cousin Larry.  I feel you.

Stephanie tells DJ that it didn’t go very well when she called that boy who was harassing her and then DJ offers some more inept advice.  Meanwhile, Michelle tries to entertain Cousin Larry’s twin daughters but they’re so unimpressed by the fact that she doesn’t own a Laserdisc player that they ignore her and bust out their Atari Lynx’s.

After Jesse passive-aggressively eats a shitload of lobster at dinner because Cousin Larry is paying, everyone returns to the full house, where Cousin Larry and his wife talk a bunch more shit to Jesse.  The rivalry between Jesse and Cousin Larry escalates until it reaches its only logical climax: they agree to pit their children against each other in the favorite twins contest.

So what does one do at a twin expo exactly?  It looks like all the twins who are there are mostly buying clothes.  I don’t know.  Anyway, Stephanie gets hit on by these twin boys but they say that they’re only into banging other twins so she tries to pretend to be 2 people by leaving the room and coming back with a hat on.  It works better than you’d think.

Meanwhile, Danny tries to call Vicky on his cutting-edge cellular telephone so he can interrupt the hot group sex she’s having with the Chicago Bears.  The Stephanie-pretending-to-be-twins premise returns and is resolved almost immediately when the twins figure out that she’s just one person.  One of them says that he still wants to bang her even though there’s only one of her and then the other one also wants her and then Stephanie’s like, “I’ll take y’all both on.”  Gross!

Everyone gathers together for the highlight of the Twins Expo, the “favorite twins” contest.  Danny really bombs as the MC and I am once again confused about why it is highlighted here that he is not funny, and yet we are supposed to believe that he actually is funny the rest of the time.  Anyway, the favorite twins contest is a bunch of fucking nonsense.  There don’t seem to be any real rules or categories, you just get to go stand on stage for about 30 seconds and do whatever you want if you are a twin.  It seems weird to pit bodybuilding middle aged men twins against poetry reading little girl twins and stuff like that.  What are the qualifiers, exactly? 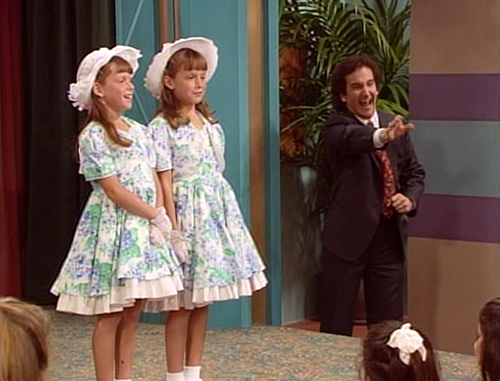 After Cousin Larry’s kids recite a poem, Jesse brings his kids out in matching Elvis Costumes while they stand around looking confused, which makes the crowd go nuts.

After their “performance,” all the twins in the competition are brought up on stage and then Danny gets a call on his cell phone right as he’s supposed to announce the winner.  Everyone has to just sit there and wait while he tells Vicky that he’s busy and he’ll call her back later.  Little did we know in the early 90’s that this particular obnoxious behavior would become so deeply ingrained into our everyday lives.  Let this be a valuable reminder to us all.  Being an obnoxious cell phone user is Full House-worthy behavior.  Do not text at the movies or talk on your cell phone in line at the grocery store.  That’s some shit that Danny Tanner would do.

Cousin Larry’s kids win second place and then he stands on stage and demands a recount until the body building twins carry him off stage. 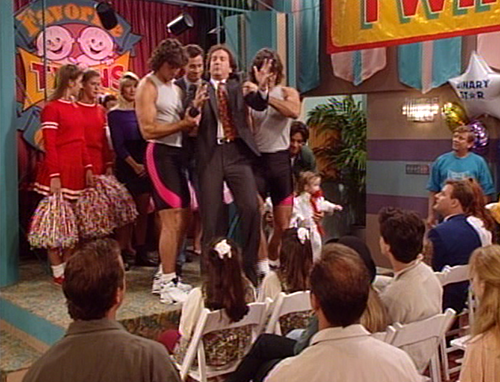 Danny announces that Nicky and Alex are the winners of the competition and I kept waiting for the audience to start chanting “Fix!” but it never happens.  Seriously, those kids live in the same house as the MC.

Back at the full house, Jesse gloats while shining the big trophy he won and then the music comes on as Becky asks him why he feels so competitive towards Cousin Larry. Jesse says it’s because Cousin Larry’s rich and he’s not and then Becky says that she doesn’t care about money and all that really matters to her is having a really attractive husband.