Pre-Credits Gag:  Michelle stares at DJ and Steve as they make out, which is a throwback to the early days of the show, when Uncle Jesse used to get a ton of ass and everyone in the full house would stare at him while he was gettin’ busy.  DJ asks Michelle if she’s ever heard of privacy and Michelle replies, “I’ve heard of it, but I don’t believe in it.”  Yeah, no shit! That pretty much summarizes this entire series.

Speaking of throwbacks to the early days, this episode opens with Jesse eating a big ass piece of fried chicken while he and Joey prepare for their radio show.  Remember when he used to eat fried chicken in pretty much every episode?  He eats it way less often now.  That’s about as close as we ever get to character development on this show.

Michelle comes home all upset and pouting and making hideous faces so Danny offers to buy her a ride on the mechanical duck that’s in front of the hardware store.  Michelle says that the mechanical duck is for stupid little babies and then Stephanie explains that Michelle’s upset because the 1st Grade play was cancelled, which, incidentally, Stephanie was going to choreograph.  I’ll just put it out there right now that there’s never really any explanation as to why Stephanie is the choreographer of the 1st grade play.  I mean, I know that the real reason is just to give her character something to do, but it really never makes sense within the story.  Anyway, Stephanie says that the play is going to be cancelled unless a parent volunteers to direct it and then Jesse and Joey end up doing it because that’s what people in the full house do.  They get involved in your shit and then they fuckin’ ruin it.  Every time they go outside that’s what they do.

Becky asks Jesse if he can watch the twins but he says that he has to leave for work and then he kisses them goodbye while the audience goes “aww”.  Becky is routinely unphased by his refusal to help and then gladly accepts Danny’s offer to watch them.

DJ and Steve come home and Michelle asks them if they’ll come to her school play and DJ’s like, “fuck yeah we will.”  DJ shares that she played the role of Yankee Doodle when her 1st grade class performed the same play that Michelle’s class is doing, “America the Beautiful.”  Stephanie recalls that she also played Yankee Doodle, which convinces Michelle that she has to play that part herself.

Becky comes home with some toy trains that she wants to surprise the twins with but then she finds them in the living room with Danny, playing with an elaborate train set that he’s just bought them.  Meanwhile, Stephanie helps Michelle rehearse for her audition and then she sings “Yankee Doodle,” which makes the crowd lose their fuckin’ minds even though it’s deeply unimpressive.  No, seriously though, I know that it’s well established that I hate this kids guts and everything, but I’m speaking objectively here.  Her “Yankee Doodle” performance truly was bland.  Regardless, after seeing it, the uncles pretty much guarantee her the role.

So Jesse, Joey and Stephanie set to work on ruining the 1st grade play but, hey, at least Aaron Bailey’s involved!  Aaron Bailey’s the shit, you guys!  He’s the realest motherfucker in the entire full house universe!

After Aaron Bailey taunts Jesse for being a greasy, unemployed piece of shit, there’s a montage of kids auditioning for “Yankee Doodle,” which we all know is just a tragic ruse.  After the montage there’s a cut to the uncles announcing the cast, which consists of Aaron Bailey and Denise as George and Martha Washington, and then no other kids are named because they’re all just a bunch of extras.  Just as the part of Yankee Doodle is about to be announced, some kid raises his hand from the back row and says that he didn’t get a chance to audition.  For some reason no one seems to know who this kid is, not even the other 1st graders.  But I’m sure you all know him well, people who grew up watching Full House.  He is Derek, the gayest human being to ever appear on a tv screen. 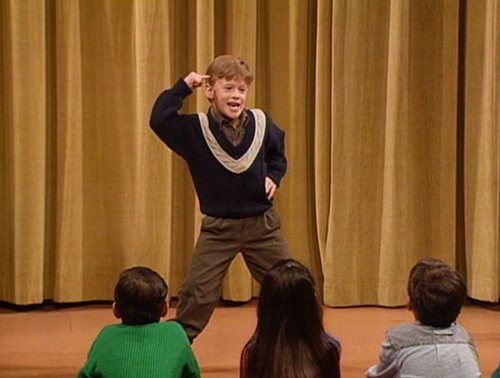 Now, before I can talk about Derek, I feel like I should clarify that I’m not trying to make fun of gay people.  I’ve talked a lot about all the gay shit that’s appeared on full house because it’s pretty unavoidable, but if anything I feel bad for gay people that their lifestyles are portrayed as so preposterous and comical on this show.  Throughout the years we’ve seen some pretty fucking gay shit on Full House, like Joey and Jesse’s writhing bodies pressed together, Joey getting raped in prison while dressed in drag, and Jesse with an apron on, preparing dinner for Danny as he gets home from work, but all of that shit seems like penises in vaginas now that Derek’s on the scene.  Derek is the gayest goddamn thing I’ve ever even heard of.  Watching him on screen for one second is like watching a thousand hours of hardcore gay anal sex.  He’s so gay that he makes Dan Savage look like Rush Limbaugh.  He makes the gay pride parade look like a wet t-shirt contest.  He makes Margeret Cho’s stand-up comedy look like Andrew Dice Clay’s stand-up comedy.  That kid Derek is so motherfucking gay that while I was watching him perform “Yankee Doodle,” Harvey Fierstein burst through my wall like the Kool-Aid man and jerked off all over my keyboard, and I wasn’t even surprised.

After Derek’s audition, which, by the way, was fairly homosexual in it’s style and form, he is immediately showered with praise by his fellow students as Michelle sits there looking sorry for herself while sad music plays.

Becky is weirded out by Danny spending so much time with her kids, probably because she’s unfamiliar with the behavior of a proactive male partner.  Michelle comes home all pissed and the uncles explain to Danny that this super flamboyant gay kid auditioned and the rules of theater dictated that he had to be cast as the lead.  I can’t really blame Michelle for not understanding the uncles’ choice, as nepotism seems to be a deeply ingrained practice in the full house.  Who are either of the uncles to deny Danny’s kids anything when they’ve been suckling at his proverbial teat and scoring jobs off of him left and right for years?

The uncles cast Michelle as the Statue of Liberty so she can still be heavily featured in the play but it’s not enough to satisfy her.  She’s a real shithead during rehearsal and Jesse is surprisingly unwilling to accommodate her so she just goes and sits in the auditorium while making a real snide face. 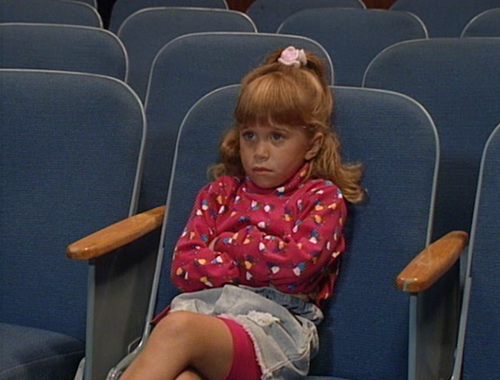 Kimmie Gibbler asks DJ and Steve if they want to go to the movies with her and then DJ starts dictating what they should see.  Steve proclaims that he’s sick of her making decisions for him, like when she volunteered that they’d go to see Michelle’s piece of shit play, and then he gets all pissed and storms out of the full house.  See, that’s what happens when you’ve been going out with a guy for several months and you wont go past first base.  A man as sexually frustrated as Steve is like a ticking time bomb.

Is this shit for real?  I am traumatized by this moment.  This is not ok.  Becky walks in on this terrifying scene and is pretty shocked.  Maybe not as much as you’d think that the mother of these kids would be upon seeing them naked in a tub with Danny’s gangly, freckled, lizard-like body, but she definitely makes some acknowledgement of how creepy and weird what we’re seeing is.  Danny at least explains that he’s wearing a swim suit, which is the type of slightly-damage-reducing detail that you don’t usually get on this show.  Anyway, Becky finally tells Danny that she’s sick of him hanging around her babies all the time and then he explains that Michelle doesn’t want to ride the mechanical duck at the hardware store anymore so he’s all desperate for baby company.  Becky tells him that he can’t hang out with them as much as he has been lately because it’s weird and annoying, but he can still have some designated quality time sessions with them sometimes.  Problem solved!

Michelle gives the uncles the cold shoulder so they try to explain to her that she’s being a real bag of dicks and she should just shut the fuck up and play the statue of liberty already.  Michelle tries to explain why she’s upset and in doing so delivers the most incredible line reading I’ve ever seen.  You kind of have to see it for yourself to get the full effect, but it goes like this, “I want to be Yankee Doode… because Stephanie and DJ… were.  Yankee Doodle, and I want to be Yankee Doodle, too.”  I can’t tell if her reading is so stilted and dreamlike because she can’t remember her lines or because her acting coach is feeding them to her from offstage, but either way I can’t help but think that it may have helped her sound more natural if she didn’t have to say “Yankee Doodle” 3 times in 10 seconds.  Regardless, I find it pretty amazing that a show this popular and lucrative couldn’t get their shit together to produce even one halfway decent take.  That is seriously the worst line reading in the history of television.

Anyway, the uncles say some inspiring bullshit and then Michelle agrees to be in the play.

Steve shows up at Michelle’s play after apparently not speaking with DJ for several days and then they patch up their dumb ass arbitrary disagreement.  The 1st grade play begins and it’s a fucking disaster.  Aaron Bailey fucks up all his lines and Denise’s wig comes off, all while Joey stands offstage, being worthless.  Derek pusses out when his cue comes on and the whole play comes to a halt.  Michelle walks offstage and the music comes on as she delivers some inspiring words to Derek about not fucking up the play by being a punk ass bitch.  The play starts up again and Derek finally delivers his flamboyant showmanship to the stage.  He sings “Yankee Doodle” and makes a point to incorporate Michelle into his performance because we all know by now that the big moral of this show is that any act of virtue or generosity will immediately be rewarded.