Pre-Credits Gag:  DJ accuses Stephanie of stealing her sweater but it turns out that Michelle did it.

DJ comes home after a driving lesson with Danny and gives him shit about how he still wont let her drive on the freeway.  Michelle comes downstairs and is all freaked out about the Norwegian Goat Boy, which is something she read about in some trashy fake newspaper.  Becky comes home with the twins and puts Jesse and Joey’s radio show on and then there are about 15 seconds of the twins staring off with blank expressions before the scene transitions over to the radio show.

Joey promotes a hockey game that he’ll be playing in for charity, which I’m pretty sure is the first time that there’s ever been any mention of him playing hockey.  Jesse adds that he’ll be the announcer for the game and then Joey points out that Jesse knows fuck all about the game of hockey.  Jesse seems pretty unperturbed by this, as he’s been coasting his whole life on good looks and other peoples’ success and has never bothered to be good at anything.

The uncles bring on their first guest, a sponsor for the event named Hirschel Binkley, who is also going to be the goalie for the team opposing Joey.  Hirschel Binkley expresses a familiarity with Joey but after he isn’t recognized, he busts out his old hockey mask, revealing that he is in fact Stonewall Binkley, Joey’s old hockey rival from college.

Stonewall Binkley recalls the joy he experienced humiliating Joey fifteen years earlier when he kicked his ass at hockey, and then he anticipates further gratification at the charity game, where he plans to humiliate Joey once again.  He then proceeds to talk a bunch of shit to Joey right on his own radio show, and even calls him a loser to his face.  Man, Stonewall Binkley’s a pretty cool guy.  I like how there have been more relatable characters appearing on the show lately, like Becky’s cousin Larry, who was appalled by what a giant loser Jesse is, and now, Stonewall Binkley, a guy who puts way too much energy into hating Joey.  I feel you, Stonewall Binkley.  I feel you.

DJ continues to ride Danny’s ass about letting her drive on the freeway until he finally caves in.  Stephanie’s comes downstairs, trailed by Michelle, who refuses to come all the way down because she’s still scared of the Norwegian Goat Boy.  Yes, this is a real premise on this show.  Danny fails to convince her that the Goat Boy isn’t real but Stephanie manages to assure her that the Goat Boy doesn’t have any way to reach San Francisco.

Jesse and Joey come home and Joey decides just as he walks into the scene that he’s not going to play at the charity event after all.  Everyone thinks that Joey should still play but they all agree to support his pussy ass decision regardless.

The family all try to ease the shame of Joey being a punk bitch by taking a recreational trip to the ice skating rink together.  Jesse is as bad at ice skating as he is at everything else he does in life, which provides a lot of physical comedy.

Danny gets on the ice and immediately turns into a really obvious stunt double who is incredibly adept at ice skating.  I have to admit that I usually like jokes like this, and if this was any other show I would think that the way that Danny being amazing at ice skating is so casually presented would be pretty funny.  But Full House only ever really makes me laugh when someone gets hurt.

Stonewall Binkley shows up, pretty much out of nowhere, and starts talking a bunch of smack to Joey about what a cowardly piece of shit he is for backing out of the game.  After standing behind his corny family who talk for him for a while, Joey finally loses his shit and yells at Stonewall Binkley about how he’s gonna fuck his shit up at the hockey game.  Wow, Joey, way to grow a testicle!

Kimmie Gibbler comes over to babysit the twins and then she mocks Michelle for her fear of the Goat Boy.  Michelle says that Kimmie Gibbler can eat her ass because she knows that the Goat Boy isn’t real now but then Kimmie Gibbler busts out another fake newspaper and shows Michelle the Mutt Man.  Just as Michelle discovers a new ridiculous phobia, Joey enters the scene in all his hockey gear and growls and stuff as he gets all hyped up for his hockey game and then Michelle runs away screaming.

Even though that last moment really seemed to be played up for laughs, the next scene begins with Joey going upstairs to console Michelle.  He finds her hiding under her bed and then the music comes on as he tries to make her understand that he’s not really mean and scary, he’s just trying to get all amped up to play some sports.  Wait, what am I even watching here?  What is the lesson exactly?  The problem seemed to be that she kept getting freaked out by these fictional creatures but somehow that means that Joey can’t behave aggressively when he plays sports?  What is the connection there exactly?  I get that it would be jarring to see a guy that’s never expressed any real emotions and who talks like cartoon characters half the time get all confrontational, but she can’t just control his behavior like that.  You know what I think would be the best solution to this problem?  If he finally moved out of that fucking house.  It made a lot more sense back in the early Seasons when he was just some unemployed amateur comedian, but he’s had a couple of real jobs now and it’s really just time to move on.  It’s the best thing for everyone.  But no real plausible solutions to the deeply-rooted dysfunctions that dwell withing the full house are ever presented, only shallow quick-fixes, and so Joey does a Kermit the Frog impression and promises never to be mean ever again.  Hugs.

Hey, wait, we just saw the music scene but the show’s not over.  That’s weird.  Usually the music comes on in the final scene.  I don’t know, I feel like a lot of the rules about the music have changed this Season.  Anyway, Jesse announces Joey’s hockey game even though he has a cartoonish lack of knowledge about the sport, including having to look into his guidebook to identify that they are playing with a puck.  Man, sometimes this shit with Jesse really gets to me.  Like if I see him suck at his job or treat his wife like shit one more time I’m just gonna start crying.  Think of all the unemployed people out there who are willing to work hard.  It’s just not right.

So Joey does a shitty job at hockey because he can’t hurt anyone while Michelle sits on the sidelines, looking all freaked out. 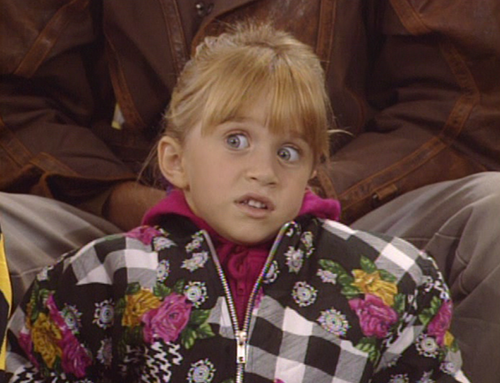 What?  Why didn’t they just leave her at home?  This is for reals the dumbest premise so far, and there have been some pretty fucking stupid ass piece of garbage premises before this.  Seriously, this episode is about how Michelle’s irrational fear of cryptozoological creatures inhibits Joey’s performance at a hockey game.  Who pitched that in the writers room?

Becky comes into Jesse’s booth and does his announcing for him because that’s the way their marriage works.  Danny enters the bleachers with DJ and Steve and tells everyone that DJ got a ticket for driving too slow on the freeway.  Joey continues to suck shit at hockey and then heads to the sidelines for halftime.  Michelle appears from pretty much out of nowhere and he pleads with her to let him play more aggressively.  Hey, wait a minute, they already had a talk over the music about this, but it didn’t fix anything.  Damn, you guys, the music didn’t resolve the problem this time!  Everything I ever knew was a lie!

So, anyway, Michelle gives Joey permission to try harder and then his game improves and then, naturally, he’s penalized at the very last second of the game is is given a penalty shot, so the outcome of the game is decided by one last showdown between Joey and Stonewall Binkley. 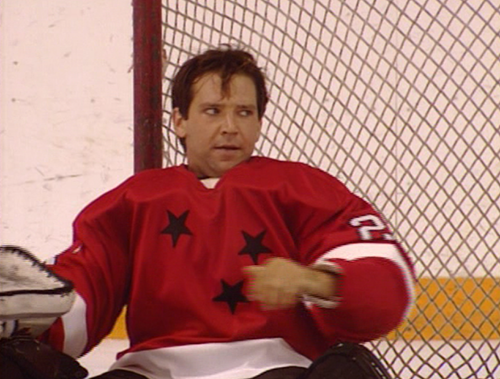 So believe it or not, Joey scores the goal and then Stonewall Binkley is disgraced and then everyone cheers.