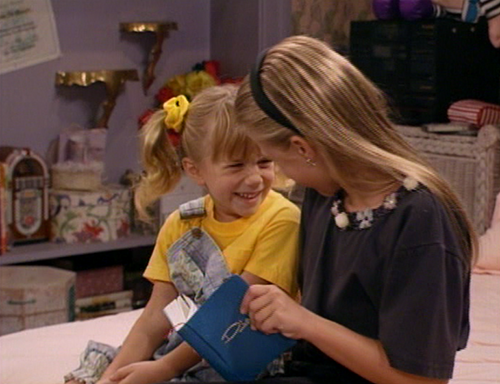 Pre-Credits Gag:  Stephanie and Michelle read DJ’s diary and have a real good laugh about it. 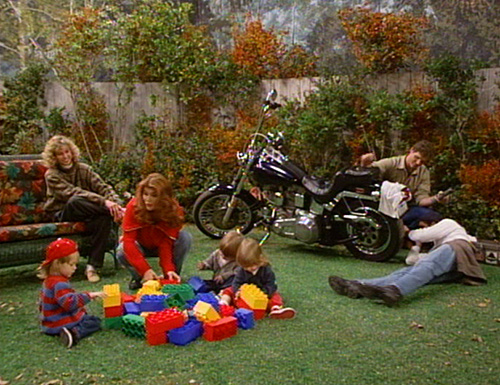 Jesse, Becky and the twins hang out with some other married couple that we’ve never seen on the show before who have a baby.  The shtick is that the married couples’ kid, Cooper, is hella smarter than the twins.  Coopers’ parents go on a big long thing about how important preschool is and how it’s gonna effect their kids whole lives and stuff, which makes a big impression on Jesse.  It’s weird to see them find a really precocious, articulate little kid to play the role of Cooper.  It’s like they’re actually going out of their way to point out to us that the twins are just two regular ass dumb kids that shouldn’t be on tv.  The scene ends with Cooper singing the alphabet and he sounds like he’s in a trance or something but the audience still goes, “aww,” but only a little bit.  I don’t know, you guys.  These Full House reviews are finally really getting to me.  I think I might actually lose my shit this time.

Just as Danny prepares to leave the full house for a bike ride, Kimmie Gibbler comes over and tells everybody that she just got her drivers license.  The girls all want to go out driving with her in he brother Garth’s car, “wild thing,” but Danny aint havin’ it.  DJ points out that Kimmie Gibbler is actually a hella good ass driver so Danny decides to take her out on the road to test those claims. 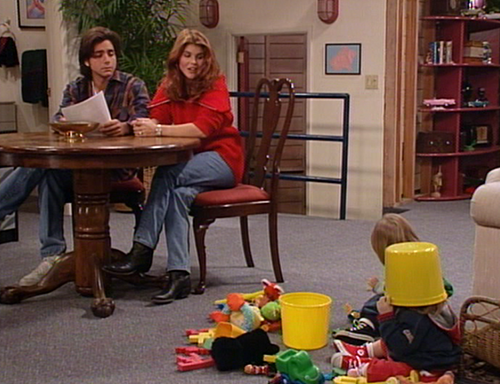 Jesse comes home with an application for the preschool that Cooper is going to go to and reviews it with Becky.  Joey comes in and tells Becky that he just put her whites and colored laundry together and then he doesn’t even give a fuck when she runs downstairs in a panic to check on the damage that he’s done.  Instead Joey just casually hangs around and convinces Jesse that it would be a good idea to lie on the applications because his babies are a couple of fucking simpletons, just like all the rest of the assholes in the full house.  At least I can give this scenario some credit for addressing Jesse’s concern over his kids getting into a good school so they don’t end up like him, getting a night school high school diploma in their 30’s.  That’s about as understandable and complex a motivation as any character has ever had on this show.

Meanwhile, Danny comes home and admits that Kimmie Gibbler is actually a hella good driver and so he gives her permission to take the girls out in her brother’s car.

Becky comes home and tells Jesse that the twins have an interview at the fancy preschool.  Jesse gets all worried because I guess he didn’t realize that his kids would have to go to an interview-much less actually attend the school-to back up his spurious claims about their mental proficiency, which in and of itself is quite a testament to what fucking dimwit stock those poor doomed twins come from.

As soon as they arrive at the fancy preschool, Jesse admits to Becky that he told a bunch of lies on the kids’ applications.  Before she can react, they’re greeted by a representative from the school who seats them and then goes into the other room, where she sits down behind a two-way mirror with another woman and tells her, “let’s observe them through the two-way mirror to see how they relate to the children.”  Why would she need to explain that to this other woman?  Isn’t it her job to do this?  She’s already sitting behind the two-way mirror with a clipboard.  Also, what a fucking creepy thing to do. 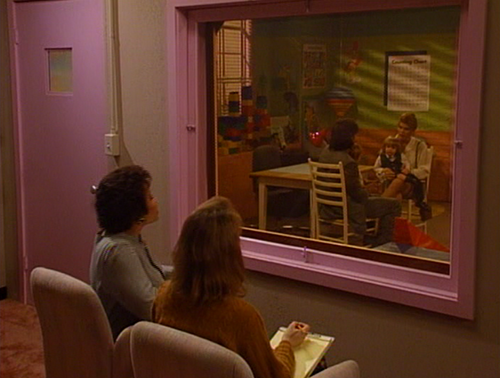 Anyway, it doesn’t even really end up mattering at all because all they do with the two-way mirror set-up is show Jesse picking a hunk of walnut out of his teeth in front of it while the women watch.  Inspired!

The interview with the representative from the school consists of Jesse either being really pushy or stammering through half-assed explanations until Becky finally admits that they lied on their applications.  The representative is like, “no shit,” but doesn’t seem to care, probably because they can afford to enroll the kids in the school.  The representative actually says that them lying on the application only shows that they want what’s best for their kids, which is yet another deeply skewed interpretation of someone’s amoral behavior on this show.

Kimmie Gibbler and the girls go out cruising in her brothers car while listening to “Wild Thing” on the radio and I kept waiting for there to be a disclaimer that read, “just in case you forgot that white people have no rhythm” on the bottom of the screen while they were jamming out.  The girls spot a bunch of nerds from the chess team and decide to mock them by getting out and running in circles around their car.  Yeah, I don’t get it, either.  But the jokes on them because they lock themselves out of the car, which the nerds think is pretty funny.  Hey, I just noticed that this is like one of the only times ever that they’ve had a scene that takes place out in the city.  I’m pretty sure that this is actually L.A. though.  Anyway, the girls all sit on the curb in defeat while the car is left running in the middle of an intersection and then all of a sudden Danny pulls up on his bike.  Pretty convenient!  But not entirely implausible, as he was talking about going out for a bike ride in an earlier scene.  Never you mind that this is supposed to take place the next day.

Anyway, Danny scolds the girls for abusing the privilege and responsibility of driving and then he tells them that they have to walk home, then they all just leave the car there, still running, in the middle of an intersection.  Somebody is totally gonna break the window and steal that car, you guys.  And frankly they should, because you can’t just leave a car in the middle of an intersection like that.  Purely for convenience, no other cars appear, but even still!  The only creative invention that ever goes into this show is all the new ways that are devised for the Tanner’s to be a total inconvenience to everyone around them.

Jesse works relentlessly to drill knowledge into his children’s thick skulls to make up for his own wasted life, but is unable to offer them much guidance after failing to properly label a pentagon, which he refers to as a “five-side-agon.”  The boys throw the pentagon block at his head and then kiss his injury, which makes the audience go, “aww,” and then Jesse realizes that he’s pushing them too hard, which is more likely just him giving up due to his inability to put a sustained effort towards anything.  Michelle comes upstairs with a letter from the fancy preschool but Jesse and Becky decide that it doesn’t matter whether or not they got in and throw it away.  Literally two seconds later, they pick it out of the trash and find out that the twins were admitted, but then they decide not to admit them anyway.  Wait, why?  What’s the lesson there?  Don’t send your kids to a good school?  What the fuck did I just watch?  Usually this shows morals are heavy-handed and overly-simplified, but this time I’m not even sure what I was supposed to be told to think.

I don’t know, you guys.  I usually try to just stick to the reviews but I gotta tell you that this shit is really killing me.  This is the most difficulty I’ve ever had with just sitting and watching the show.  It’s been so bad for so long, but somehow it just keeps getting worse.  It is physically hurting me to write these Full House reviews.