Pre-Credits Gag:  Michelle and the twins are bored by the children’s songs that the uncles are playing for them so the uncles switch their performance to a Reggae rendition and then they all dance.  Watching Joey sing like a Reggae guy while Jesse plays a faux-Reggae beat on his keyboards and the kids dance around made me feel like I was going straight up mentally insane.  It’s like, if I was the guy in A Clockwork Orange, this is the footage that they would make me watch while they held my eyes open.

Danny reads Michelle a dinosaur-themed bedtime story in anticipation of her class trip to the museum the next day, where they’ll be viewing dinosaur bones.  Jesse comes in and says that one of the parent volunteers just called and can’t make it so the trip might have to be cancelled, but then Michelle is able to melt his heart with her hideous face so he agrees to be the replacement volunteer.

In the morning, Danny is in a hurry to get ready before the kids from Michelle’s class arrive, because they’re all meeting up at the full house instead of the school for some unknowable reason, so Danny asks Joey to help out by rinsing the breakfast dishes off for him.  Joey agrees and then just holds the dishes out for the dog to lick clean, as though we needed a reminder of what a useless asshole Joey is.  Seriously, this shit has been going on for 6 years now.  Why doesn’t Danny know by now that no help is better than help from Joey?

Anyway, Stephanie comes in after having cleaned Joey’s car so he gives her $10 and says that all the shit she cleaned out of his trunk is now her responsibility.

DJ and Steve enter the scene, and the audience all go “woo!” and “ow!” at the sight of him, which is kind of a new thing.  They have a brief discussion about how he can’t afford to get a limo for the prom and then, seemingly incidentally, Stephanie gives him some old baseball cards from the box of leftover shit from Joey’s trunk.

After Steve leaves, Aunt Becky comes in with the twins and there’s yet another overly-long scene of those babies doing next to nothing until Becky looks at one of the leftover baseball cards and explains that at least one of the cards that they just gave Steve is worth hella money.  DJ and Stephanie immediately argue over who should get to claim the cash. 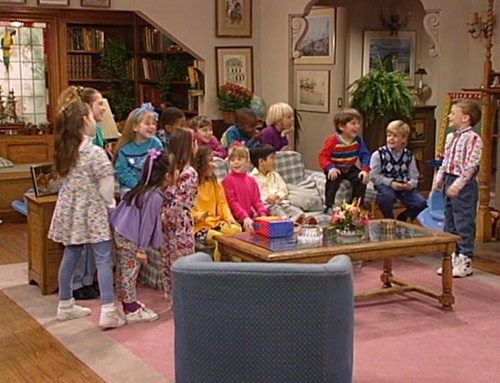 The next scene opens with a whole bunch of little kids sitting in the living room of the full house laughing, and it kind of seems like Aaron Bailey must have just said, “rectum?  I nearly killed him” seconds before.  It’s always a pleasant relief to see Aaron Bailey onscreen.  He’s always a patronizing asshole towards Jesse and generally aware of how stupid and annoying everything on Full House is.  It’s like he’s the only one who really understands.

Derek is also present in the scene, which probably explains why the living room immediately erupts into a big flamboyant dance party. 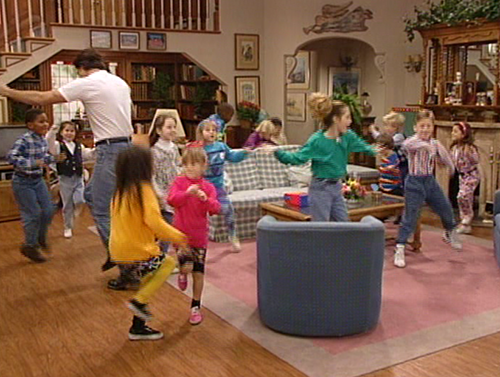 They actually put a new set together for the museum, with a big fake dinosaur skeleton in it and everything.  Danny and Jesse continue to talk shit to each other about their varying philosophies towards managing groups of children and then they each set their groups loose around the exhibit.  Jesse’s group proves to be unruly and then Danny assembles his generally well-behaved group to go view the rock exhibit offstage.

Denise asks Michelle to play tag with her and then they run around the dinosaur skeleton until Michelle clutches its leg, which knocks one of the bones loose.  The entire skeleton then begins creaking and rocking back and forth, which leads to an overly long sort of action sequence where the skeleton gradually falls apart while dramatic music plays. 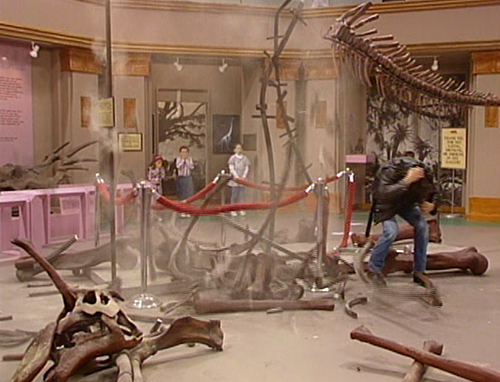 Jesse frantically tries to reassemble the dinosaur skeleton, which draws way too much attention to what a cheaply made prop it is.  You can actually hear the styrofoam squeaking together.  A security guard shows up, who must have been taking the world’s longest pee break during the whole previous portion of the scene, and then Danny comes in with his group and discovers the chaos.

Meanwhile, back at the full house, everyone tries to track down Steve so they can reclaim the card they gave him and sell it.  No one can agree on who should get the money and then Becky tells Joey about it, who was the cards original owner.  After some more greedy debating, Steve shows up and tells everyone that he sold the card himself.  There’s some more discussion about where the money should go, which ends pretty amicably,  and then Steve reveals that he sold the card for a mere $30.  Everyone tells him that he’s a fucking idiot because the card is worth way more than that so he decides to go shake down the kid he sold the card to.  That’s really how that storyline ends.

Danny, Jesse and Michelle come home and there’s a long expository argument about how Jesse has to do volunteer work at the museum for the next 10 weekends to make up for the destruction of a priceless dinosaur skeleton.  I don’t know, you guys.  Do you think that this is the most preposterous incident of them all? Who even thought of this premise?  “Michelle knocks over a dinosaur skeleton.”  I guess it’s one of the more original ideas they’ve had on this show, which kind of proves that you’re damned if you do and damned if you don’t.  Also, I can’t really pretend that I know what would happen to you if you seriously fucked up a dinosaur skeleton at a museum, but I’m pretty sure that it would be a lot worse than some volunteer work.

So Jesse and Danny have a heated argument about their varying approaches towards managing groups of kids, because I guess that being accountable for the destruction of a fucking dinosaur skeleton isn’t enough to make Jesse feel like he’s lost an argument, and then Michelle gets all upset and starts yelling about how it’s all her fault, then she runs upstairs, then the audience goes “aww”.

Jesse and Danny go up to Michelle’s room and console her by telling her that it’s not her fault that she recklessly knocked over a priceless artifact.  Jesse blames himself and says that the dinosaur got knocked over because he was such a negligent group leader and then Michelle straight up says that it is his fault and she wishes she was never in his group.  She says it in a real asshole way, too, like she can’t believe what a piece of shit he is.  See, that’s the kind of behavior you should expect from a kid that you don’t reprimand when she does something totally outlandishly terrible.  She has no moral compass whatsoever.  She is the devil.

Danny tells Michelle not to be so pissed at Jesse and then the music comes on as he explains that he’s been hating on Jesse because he was butt hurt about how Michelle wanted to be in his group.  Then Jesse and Danny talk about how much they like each other and how they learn from each other and their lives are deeply enriched by knowing each other then they rub their boners together.  Then they tickle Michelle.

Man, that whole episode was nothin’ but nonsense.  I think the thing I hate most about full house is that it’s so preachy, and yet there are never any real consequences for anything, and more and more often lately it’s not even clear what the lesson is.  But seriously, knocking over a dinosaur skeleton is a really bad thing to do.  I think it would really effect your life if you did something like that.

Firsts:  The audience yell “whoo!” and “ow!” when Steve shows up onscreen