Pre-Credits Gag:  Stephanie tries to enjoy a peaceful moment to herself watching the clouds but then Michelle ruins it. 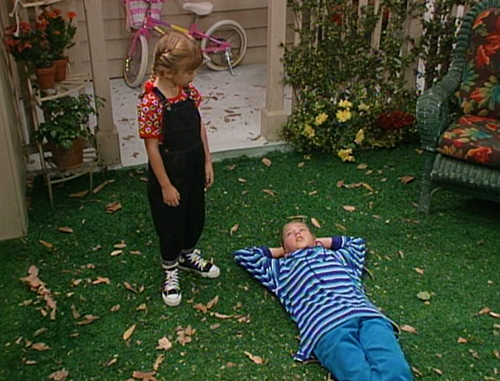 Danny and Becky prepare for next week’s episode of Wake Up, San Francisco, which will feature a Sumo wrestler who is going to demonstrate some of his moves on Danny.  Their discussion is interrupted by Jesse, who comes home and says that the guy who owned the Smash Club, a character that we’ve never seen or heard mention of before, not even one time, has died and left the club to Jesse in his will.  There is a brief questioning of why he would have done such a thing and they speculate that it’s because Jesse’s shitty band played there more than any other shitty band, but we all know that it’s because Jesse’s lot in life is to piss and shit his way through everything while being copiously rewarded despite his total lack of talent or effort.  Danny reads the fine print in the will and discovers that if Jesse doesn’t open the club soon then he’ll lose the deed.  Becky questions Jesse’s ability to run a club but he assures her that being terrible at everything has never stopped him before.

Michelle cleans her room and then the twins run in and yell, “pushell.”  She tells them that she can’t hang out because she has to clean her room and then they start putting her toys into her foot locker, which is apparently the sole requirement of cleaning her room, so Michelle just lays back on her bed and watches them do her work for her. 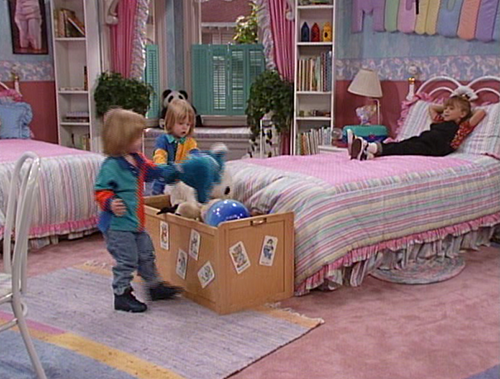 DJ, Steve and Kimmie Gibbler all come home and celebrate the arrival of Friday.  Stephanie asks them if they have any plans and they admit that they don’t, and I have to say that I’m pretty surprised that they didn’t say that they’d be watching T.G.I.F. on ABC.  Jesse comes into the room and everyone congratulates him on acquiring the Smash Club and then they talk about how much it sucks dick that they never get to see any live bands because all the good clubs are for ages 21 and over.  This provides Jesse with the epiphany that the best way to make the Smash Club as boring and lame as everything else in his life is to not serve booze or have an age limit.

Jesse tries to clean up the club to make it presentable before a lady from the bank comes over to inspect it.  It’s pretty clear that this whole scenario would go a lot smoother if he’d bothered to show up just a little bit earlier to organize things rather than hastily attempt to get rid of a bunch of garbage in a few minutes.  He brings Joey along to help him but all Joey does is get scared at the sight of a rat and break his head through the counter of the bar.  That’s actually more helpful than I would have predicted he’d be.

Jesse and Joey try to compensate for how weird it is that Joey’s head is stuck in the counter by attempting to turn it into an impromptu sales pitch but the lady from the bank quickly tells them to shut the fuck up and quit wasting her time.  She starts asking the actual practical questions that someone would need to know the answers to before approving a loan, like if the building is up to code, and it immediately becomes clear that Jesse has done no research or made any effort at all to learn anything about what is required to open a business. Well, no shit.  He couldn’t even put in the effort to pick the garbage up off the floor so it’s not like he could be expected to read a book or something.  Jesse is denied the loan and I guess that we’re supposed to feel bad for him about how the club that he was given for free can’t be opened because a bank wont give him some money to fix it up because he didn’t even try a little bit to figure out what he needed the money for.  Why doesn’t he just hit his wife up for the money?  Or Danny? 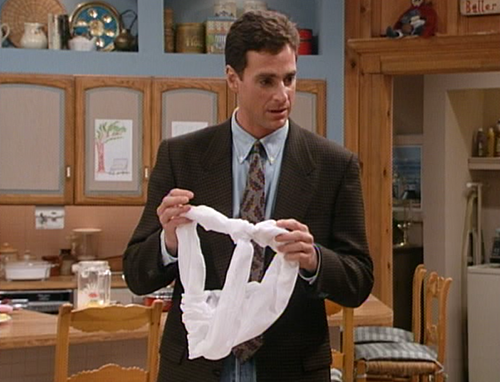 Danny laments the sexy outfit he’s going to have to wear on tv when he gets manhandled by that Sumo wrestler.  Jesse come downstairs and is rather chipper because he was able to convince the lady from the bank to give him another interview and he’s actually going to put in some effort into knowing his ass from his elbow for once.  Michelle gives him a congratulatory hug and the audience goes, “aww.”

Michelle sits in the backyard and makes the twins do her bidding.  It’s actually a really short scene, probably due to the extremely limited capabilities of all of the actors involved.

Danny comes home all fucked up after getting his ass handed to him by that Sumo wrestler on Wake Up, San Francisco.  I guess they decided not to film that scene because it might have been enjoyable to watch.  Actually, seeing as how we would have had to have seen Danny in those little Sumo undies, I guess we can say that we dodged a bullet.  Danny presses a frozen rump roast against his sore back and makes orgasmic moaning sounds that immediately nullify my relief over not having had to see him in those little undies.

Michelle continues to order the twins around in the backyard so they call her “mean Michelle” and spray her with the hose.  Right on!

Michelle gets all pissed and starts yelling and then Danny and Becky come outside to see what all the commotion is.  Michelle complains about how the twins staged a coup after she made them her personal slaves and then the music comes on as Becky and Danny explain to her that she’s been being a real bitch and it’s not cool exploit her cousins like that.  Michelle apologizes and then they all hug and the audience goes, “aww.”  I’m kind of surprised that they used the music for this scenario since it only took up like 2 minutes of the episode.  It’s also one of the least inspired lessons in the entire series, which is really saying a lot.  “Don’t force your 2-year old relatives to pick up after you and get you water and stuff.”  You can really see how cynical and effortless the series is at this point. 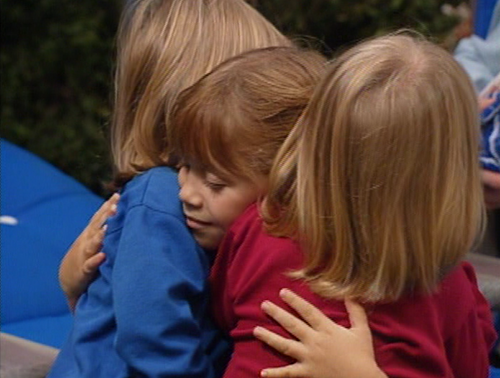 The girls quiz Jesse about what the different health and zoning codes are even though he’s not required to have them all memorized by what their number is, he just needs to makes sure that his building follows them.  It doesn’t matter anyway because he doesn’t know them either way.

The lady from the bank shows up and starts going over details with Jesse.  She says that the food preparation area will have to be upgraded and then Jesse paces around and stammers while trying to remember the number of that code even though she never asked him what it was.  Michelle comes in from the kitchen, where all the girls are listening in, and comes up with a lame excuse to show Jesse her hidden piece of paper that has the code written on it.

What the fuck is this?  The lady from the bank is not asking him what the numbers of these codes are.  All Jesse has to do is figure out what the upgrades he needs are and say that he’s going to do them.  She’s not even quizzing him about what they are and seems pretty willing to provide him with all of the information that he needs.  All he has to do is say “uh-huh.”  This is just total nonsense.  The weirdest thing about it is that every time Jesse is sneakily given one of the code numbers by one of his nieces, which happens several times, he rattles it off to the lady from the bank and she just looks at him like, “why are you even saying that?”  So even the people who are making the show know that this is nonsense.  So why is it even happening?  It’s one thing when it seems like nobody who made this show knew any better, but in this case they clearly did.

After Jesse stammers and cheats his way through the interview for several more painful minutes, the lady from the bank asks him why he wants to reopen the Smash Club.  He tries to get his nieces to sneak him the answer even though it’s an open-ended question and then he makes a half-assed attempt to deliver a business-centric answer and then the lady from the bank tells him that she can’t help him.  Out of desperation, Jesse says that he’s not a businessman and doesn’t belong in her suit-and-tie world, and then the music comes on as he explains that he wants to reopen the Smash Club because he loves it and he wants there to be a corny, g-rated nightclub for freakishly wholesome people who enjoy terrible covers of songs that weren’t that good in the first place.  Then he tells her that he’s going to find a way to reopen the club with or without a loan from the bank (presumably by “borrowing” the money from his wife, or Danny) and she replies by telling him that she’s going to approve his loan.  She explains that he provided exactly the right answer because it came from his heart, which is the biggest load of bullshit I’ve ever heard in my life.  How many entrepreneurs have been told to stick their dreams up their asses even though they were a million times more qualified and prepared than Jesse is here?  All those unfortunate, cast-out individuals had plenty of heart, too.  Jesse getting this loan for no reason is one of those cases where this show surpasses naivete and just ends up being straight-up insulting.

Finally, for no reason at all, the lady from the bank tells Jesse that she’s seen him perform at the Smash Club a bunch of times because she used to be a cage dancer there.  What?!!?

125 Responses to Season 7, Episode 6, “Smash Club: The Next Generation”