Pre-Credits Gag:  A large, exotic parrot flies into the girls’ room from outside and scares Comet.

Joey comes home with his new girlfriend, Roxy, who is also a comedian.  She tells him that she’s nervous about meeting his stupid dorky family because, although she is experienced in performing in front of crowds, she’s always nervous about meeting people.  Joey tells her not to worry and then they have this really staged kiss that made me want to stab out my eyes.

Joey and Roxy walk into the kitchen while Danny is in the process of brain-washing the twins into being his obsessive-compulsive-cleaning minions.  Danny offers Roxy a pleasant greeting and then she fails to make any sort of humorous small talk.  After Danny walks out of earshot, Roxy chastises herself for not being more funny and Joey tries to reassure her that it’s ok, failing to mention the comforting fact that nothing anybody ever says in the full house is funny.

Becky comes downstairs, followed by Jesse, who is wearing a sort of tinfoil hat, which has something to do with hair treatment, I guess, or, you know, blocking out invasive mind-reading rays.  Becky and Jesse demonstrate how unfunny the banter in the full house is and then they’re introduced to Roxy, who proves herself to be equally incapable of saying something funny. 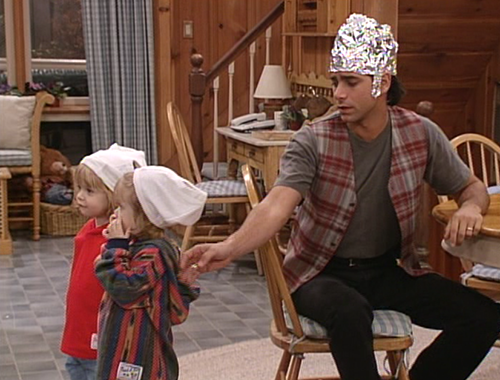 The twins wear underwear on their heads in tribute to Jesse’s foil hat and then they run out of the kitchen.  The girls all come downstairs and show off the parrot they’ve found (another rare example of the pre-credits gag playing a role in the actual plot.  I wouldn’t have been remotely surprised if the parrot was never seen or mentioned ever again) and Joey recognizes it as belonging to “Big Sid,” who runs an electronics store. 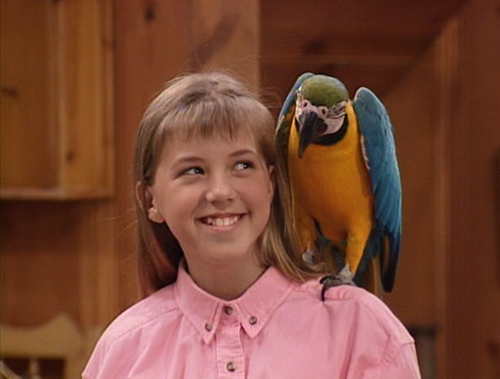 They assume that there will be a reward for returning the parrot, which leads to the girls arguing over who should collect it.  Michelle says that she should get it because the bird took a big shit on her bed.  Their arguing is cut short by their introduction to Roxy, which once again leads to her being unable to dispense any sort of humorous small talk.  Roxy excuses herself to go to an audition, but not before giving Joey another overly staged kiss that made me seriously consider living an asexual lifestyle.

As soon as Roxy leaves, Joey apologizes to the family for her inability to make them laugh and they’re all like, what the fuck do we care if your stupid girlfriend’s funny?  Seriously, if that’s the biggest thing that’s wrong with a woman that Joey brings home then it’s like a goddamn miracle.  I’m surprised that she wasn’t the one wearing the tinfoil hat.  Anyway, Joey invites his stupid family to see his lame girlfriend do stand-up at, you guessed it, the Smash Club.  Because where else could she possibly have been performing? If it’s not the backyard then it has to be the Smash Club.  Those are the only choices.

The girls come home after returning Big Sid’s bird and tell Danny that they’ve been offered any one item from his store catalog as a reward.  DJ wants a big screen tv but Stephanie argues that they should get a karaoke machine instead.  She explains what a karaoke machine is for the sake of context because I guess it wasn’t as common a thing in the 90’s, especially for the shows target audience, since hardly anyone who watched Full House back then were drunken college students.  Anyway, this is like the dumbest fucking argument I’ve ever heard in my life.  Don’t get me wrong, I’ve gotten plastered and sang, “You’ve Lose That Lovin’ Feelin'” in front of a bunch of strangers in a bar more than a few times in my life, but what the fuck do you need a karaoke machine in your house for?  And even if you did think that it would be a fun thing to have, there’s no way that any sane human being would choose it over a big screen tv.  I’m also surprised at the suggestion of a karaoke machine because of the Tanner family’s frequent disrespect towards Japanese culture.  It almost seems like it’s intentionally supposed to be a terrible suggestion, but it’s never really played that way.  Naturally, Danny gives the deciding vote to Michelle, because she gets to decide everything that ever happens.  Because she’s the devil.

Joey stands backstage with Roxy before her comedy gig at the Smash Club and she tells him that she worked his family into her act.  Then they have another overly staged kiss that gave me fits of shaking and vomiting for 36 hours. It also made the audience go, “whoo!”

Roxy comes out and immediately starts telling jokes about Joey, because women should always define themselves by the men they date.  She makes references to how much he likes cartoons and doing stupid, shitty impressions, as if the audience know all about him.  She then proceeds to tell jokes about all of the members of the Tanner family that are pretty insulting.  She talks shit about Wake Up, San Francisco (which is pretty overdue if you ask me), how much the girls fight with each other, and Jesse’s greasy hair.  The family are all super pissed, but probably not as much as they would have been if Roxy’s routine hadn’t been all about them.  Meanwhile, the audience seems to enjoy the act even though it’s all about some family in the audience that they don’t know or care about.  I guess they all knew to expect this when they went to a show at the Smash Club.

Later, back at the full house, Joey makes passive-aggressive references to the family having no sense of humor.  Danny, Jesse and Becky all tell Joey that his new girlfriend is a real c-word and then Joey tells them that if they don’t want to be around her then they can’t be around him either.  Well, shit, Joey, why don’t you go and get YOUR OWN FUCKING APARTMENT THEN, FOR GODS SAKE?  WHY DON’T YOU FUCKING MOVE OUT, YOU WORTHLESS, OBNOXIOUS PIECE OF SHIT?!!?  TAKE YOUR SHITTY SWEATERS AND YOUR TERRIBLE IMPRESSIONS AND YOUR STUPID FUCKING FACE AND GO START YOUR OWN LIFE, FOR FUCKS SAKE.  IT’S BEEN SEVEN YEARS!  I CAN’T TAKE THIS ANY MORE.  WHY DOES HE STILL LIVE IN THE FULL HOUSE?  HE’S NOT HELPING ANYONE!  EVERYONE IN THAT HOUSE IS SO TERRIBLE BUT HE IS THE WORST ONE!  THE ABSOLUTE WORST!  HE’S FINALLY GIVING THEM AN OUT!  JUST TELL HIM TO LEAVE!  DO IT!  PLEASE, JUST TELL HIM THAT HE HAS TO MOVE OUT!

Whoa, sorry about that.  Anyway, everyone squanders the only opportunity they’ll ever have to get rid of Joey and instead tell him to invite his stupid girlfriend over for dinner so they can all patch things up.  This leads Joey to do a terrible impression of Ren from Ren and Stimpy (terrible AND dated) and somehow the rest of the family fail to recognize it as a reminder of what a terrible mistake they’ve just made.  I don’t know, there could still be hope.  Joey could always die somehow.  Like maybe he could choke to death, or be murdered, or come down with a terminal illness.  I have to tell myself that these are possibilities.

Stephanie and DJ both pressure Michelle to pick the electronic entertainment device that they want and then Danny intervenes and sweeps Michelle off to Big Sid’s so she can make the decision without either of the other girls there to influence her.

Michelle and Danny come home and show everyone the item they picked out:  a cardboard cut-out of Big Sid. 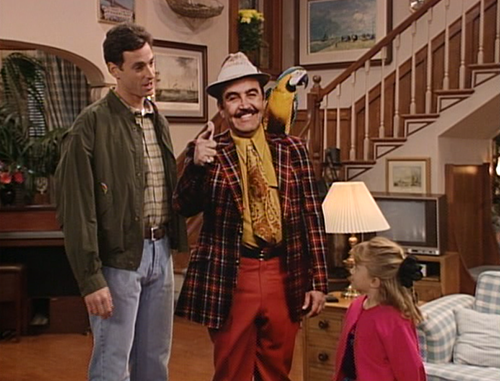 What.  The.  Fuck.  This shit is just unbelievable.  Before this happened, I could actually kind of get behind giving Michelle the deciding vote.  It sort of made sense.  The three girls all found the bird, two of them couldn’t agree on what to get as a reward, so the third one was given the choice between their two options.  That’s democratic.  But then Danny, who agreed to that idea, just let her go pick out whatever the fuck she wanted.  And not only that, she picked the most stupid, worthless, impractical thing imaginable.  Danny apologizes to the other girls and said that he lobbied for a washer and dryer but it was ultimately Michelle’s choice.  Seriously, what the fuck?  Couldn’t he have used veto power since he was the person driving home, or, you know, because he pays for everything all the time?  What a terrible waste.  And what’s the lesson here exactly?  I guess it might be that if you fight over something then you’ll end up with the shittiest possible outcome. Or maybe it’s easy come, easy go.  Or maybe it’s just another reminder that Michelle is the fascist dictator of a house full of obnoxious whitebread assholes.  Yeah, that sounds about right.

Danny gathers everyone together and tells them that they have to placate Joey’s stupid girlfriend by laughing at everything she says or Joey will get all butthurt again. Meanwhile, on the front porch, Roxy worries about being re-introduced to the family so Joey tells her not to worry about being funny and to just be open and honest instead.  Sounds like we’re about to witness a little bit of that classic sitcom miscommunication!  I’m also totally blown away by there being a set for the front porch all of a sudden!  Why now, after years and years of scenes that nonsensically took place in the backyard?  A front porch set seemed like a simple solution to countless logistical problems dozens of times before but they never used one until now, and all because Joey had to give his lame girlfriend a pep talk so his family would like her even though there’s no way she’ll ever be on the show ever again no matter how this turns out.

Roxy sits down to a fried chicken dinner with the family and they all guffaw every time she says anything.  She tries to offer them a sincere apology about hazing them on stage but they just repeat the last few words of whatever statement she makes while laughing like idiots.  Joey loses patience with the bizarre miscommunication that’s taking place in front of him and then the music comes on as Joey explains that he just wanted the family to think that Roxy was funny because he moved around all the time as a kid and so he used being funny as a means of getting people to like him.  First of all, way to make this all about you, Joey.  Second of all, you’re not funny, and nobody likes you.  Maybe if you learned to keep your fucking mouth shut for five seconds you might be tolerable, but even then probably not, because of your face.  Anyway, the family all reassure Joey that they love him even though he’s the most despicable human being in history (including Hitler) and then they all agree to make a fresh start with Roxy and then the credits come on before they actually take the time to learn anything about her because all that matters about her is that she’s Joey’s girlfriend.  Plus she’ll never be seen ever again.