Bonus Entry: Jesse and the Rippers on Jimmy Fallon

Every now and again I’ll get an email or someone will post on the FHR Facebook page about some Full House related piece of news, like when the cast got together for a private Full House reunion, or any time Jodie Sweetin gets divorced and/or has a drug-related relapse or something (which seems to happen an awful lot).  I’m usually not particularly interested in these types of things but I always appreciate the active community that’s formed around this site and the comments and conversations that happen when people post on here.  Plus it always makes me feel all special and shit when people think of me when they see something Full House related. 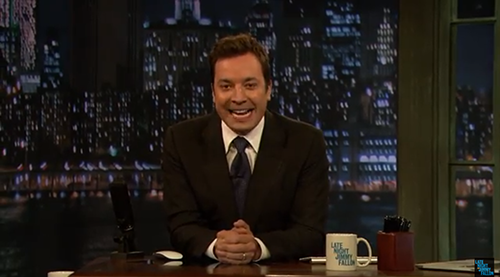 About a week ago I got a notice about Jesse and the Rippers reuniting on the Jimmy Fallon show and I didn’t really give it much thought.  I’ve almost never watched Jimmy Fallon (except for the Saved By the Bell reunion stuff he’s done, which I’ve youtubed the shit out of) and, although I’m obsessively recapping every episode of Full House, I think it’s pretty clear that I don’t have a very high opinion of the show and that I’m already putting way more time and energy into watching it than I should, so any additional Full House related programming isn’t exactly compelling to me.  But then I got another notice, and another one, and a bunch of emails, and pretty quickly it became clear that a whole lot of people were pretty excited about this.  Eventually, whatever tragic, self-destructive sense of duty that forces me to watch every episode of Full House and write a lengthy recap of why it sucks also made me feel obligated to watch this stupid Jesse and the Rippers reunion.  It was my own terrible idea to become the Full House guy on the internet so I might as well go all the way with it, right?  So here you go, weirdos on the internet: a brief recap of the Jesse and the Rippers reunion that I wrote just for you.

My initial question was, who are the Rippers exactly?  Throughout Full House, there never seems to be a solid roster of members.  Early on there were like 15 of them and then they seemed to sort of thin out, with changing members all the time.  But there was that one guy with the curly hair that I always recognized and sure enough, there he was, right next to Uncle Jesse.

I was never really sure if the Rippers were a real band.  It seemed probable to me that they were just a bunch of extras who showed up and pretended to play instruments but I guess at least some of them were real musicians.  I don’t know much about the history of these guys and I’m not about to look it up.  One of the best things about having a really active comments section on a site like mine is that you can totally get away with being lazy about stuff like that.  Wow us with your trivial knowledge, comments section!

John Stamos has aged really well.  He also seems really good humored about having starred on the worst show of all time.  Seeing as how he’s the one cast member who’s managed to have a real career after the series ended, as well as being the only one who’s a charismatic and talented enough performer to avoid being marred for life by having been on Full House, it makes sense that he’d have a good attitude about it.  I don’t know why he agreed to do this performance but I doubt he needed the money or attention and it seems like he’s just genuinely having fun with the nostalgia behind the whole thing.  He even wore a shitty Uncle Jersey wig and that stupid vest.  What a good sport!

One thing I found really distracting is the guy in the white polo shirt in the crowd directly behind Jesse.  His goonish dancing immediately caught my eye and then I couldn’t stop watching him throughout the entire medley of songs.

Couldn’t they have reserved that prominent spot for someone who wasn’t going to totally embarrass themselves?

Then again, forcing the viewers to feel shamed and embarrassed for the people on the screen is the greatest tradition of Full House, so maybe he was placed there intentionally to lend authenticity to the experience. 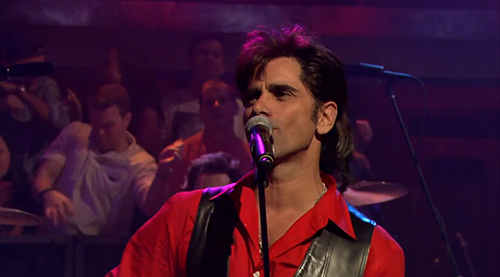 So Jesse and the Rippers did a medley of songs, starting, of course, with “Forever,” and then transitioning into what I think was an Elvis song, then “The Hippy, Hippy Shake” (which I definitely remember them performing on Full House) and finally, the theme from Full House.  It didn’t really stand out from any other Jesse and the Rippers performance except for the genuine enthusiasm that was pouring out of the audience.

There were also a few surprise cameos.  Bob Saget was spotted dancing in the audience and I’d be willing to bet that he wasn’t even invited and only showed up because he had nowhere better to be.

Lori Loughlin came out at the end and, damn, she might even look better now than she did 20 years ago.  You’re aging like a fine wine, Lori Loughlin.  A fine ass wine.

The best part about the whole thing was that Dave Coulier wasn’t there.

This entry was posted in Bonus Material. Bookmark the permalink.

68 Responses to Bonus Entry: Jesse and the Rippers on Jimmy Fallon