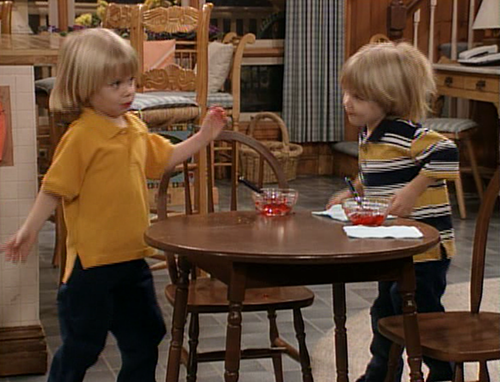 Pre-Credits Gag:  The twins eat Jell-o and then say some undecipherable nonsense before doing a little dance.  Joey comes in and tells Becky that he met a french woman in the park and made a date with her.  The woman is apparently also bringing a female friend, which Joey seems pretty excited about.  [Insert menage a trois joke of your choosing here]

Stephanie plays some weird table hockey-esque game on the coffee table with Michele until Gia shows up at the full house, at which point Stephanie totally ditches her ugly little sister. 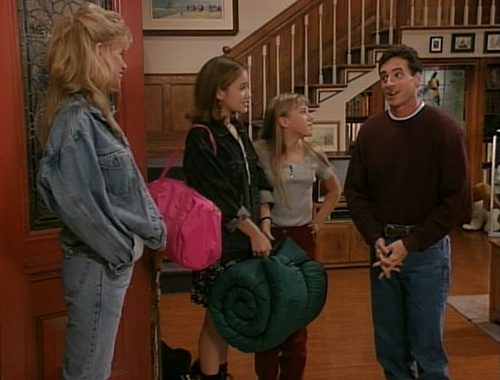 Gia’s mom is there to drop her off and Danny immediately gets up and starts putting the moves on her, which, for him, means stammering and rambling and making painful jokes.  This is actually a continuation of a storyline that was introduced in a previous episode and, even though there’s not much to it, this show has cultivated such low standards for itself that I’m actually impressed.  Anyway, Danny eventually manages to string together enough coherent words to ask Gia’s mom out for coffee and for some reason she accepts. 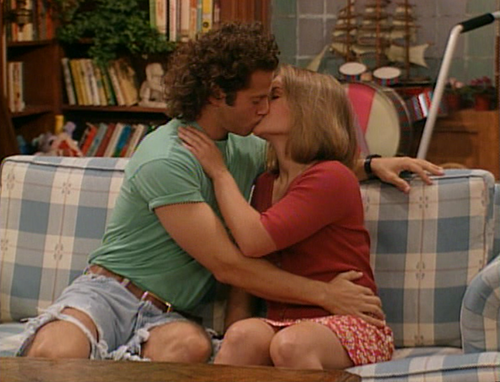 DJ and Viper engage in some passionate closed-mouth kissing on the couch until Jesse comes in and interrupts them.  He starts ranting about a newspaper article that details his new band and speculates about whether or not he’ll be able to make a comeback and instead of being totally amazed that anyone gives enough of a shit to even think about him at all he gets super pissed.  How can you even make a comeback if you were always a shitty failure, anyway?

After Jesse takes his rant to the other room, DJ and Viper read the article on the couch together and then she asks him if he’s done before turning the page.  Even though that’s basically just a casual display of decent manners (a rarity in the full house), Viper gets all butthurt because he takes it as an implication that she thinks he’s a slow reader.  I kept expecting this to turn into a very special episode in which we discover that Viper can’t read (that was totally a thing in the 90’s.  Jordan Catalano couldn’t read, Blossom’s boyfriend was dyslexic or something and Mallory Keaton’s boyfriend was a complete fucking moron.  I don’t know why smart young women having learning impaired rebel boyfriends was such a hot trend back then) but it’s really just a forced argument to try to make their relationship somewhat interesting.  Hey, I just noticed that like every single romantic relationship ever on this show is completely defined by the arguments that occur within it.  Jesse and Becky’s relationship is like that, and so was DJ and Steve’s.  It’s like if they’re not having some totally absurd argument about something trivial then there’s nothing going on in the relationship at all.  What’s up with that?  Anyway, Viper gets all irate and accuses her of thinking that she’s better than him because she’s going to go to college and then he storms off like a big fucking baby.

Stephanie and Gia look at objectionable outfits in magazines and Michelle tries to include herself.  Gia and Michelle start talking hella shit to each other, as they’re wont to do from time to time, and then Danny comes in full of song because he totally just banged Gia’s mom.

He comes in and takes a seat, which is totally natural because teenage girls love it when their dads come in and chat them up while they’re having sleepovers, and he tells the girls about Gia’s mom’s hot pussy and how he totally tore that shit up.  He leaves to go take a shower and then Stephanie and Gia start speculating about how awesome it would be if their parents got married and they became sisters.  While they’re talking, the camera keeps switching over to Michelle’s stupid face as she expresses disapproval because their fantasy scenario doesn’t revolve around her.

The next morning, Michelle tries to include herself in the conversation once again as Stephanie and Gia discuss what they’re going to wear to Jessie’s terrible show at the Smash Club.  Gia routinely refers to Michelle as “Little Michelle,” which seems really forced and unnatural to me.  Also, and I fully recognize that I’m a bad person who should go to jail for pointing this out, but, good lord, Gia’s got some straight up jugs!

As Jesse forces Viper to practice rigorously before their performance to accommodate his own insecurities (never mind why the rest of the band doesn’t have to practice, too) DJ comes in and gives him the cold shoulder.  She leaves the scene after they have another terse exchange and then Viper realizes that he’s the asshole in this scenario and wonders how to fix it.  Jesse tells him to buy DJ a silly gift to show that he has a sense of humor, which is both completely nonsensical advice and a strategy that we’ve never seen Jesse put to use even after like ten million fights that we’ve seen him have with his wife (after all, that is what defines their relationship).

Gia and Stephanie arrive at the Smash Club with Michelle, who walks off with a bag that contains something mysterious.  Joey comes in with a beret on while speaking with a mock-French accent and I have to say that, this far into the series, I’m amazed that he still somehow manages to find ways to make me hate him even more.  I really hate Joey, you guys.  He asks Becky if she’s seen the french chick that he was talking about during the pre-credits gag and she says that she hasn’t.  That’s pretty odd that this sub-plot was started in the pre-credits gag.  I don’t know if that’s ever happened before. 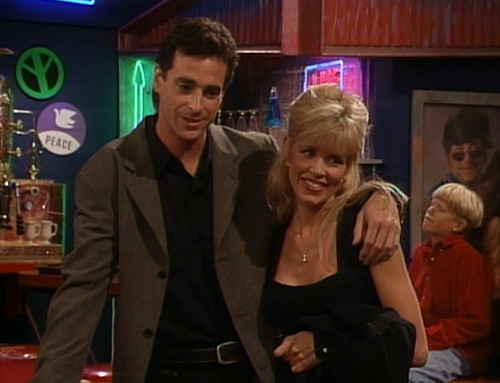 Danny come in with Gia’s mom and they greet the girls.  Danny tells Gia that he really enjoys putting his penis inside of her moms vagina and then he makes a bunch of lame jokes about cologne or something.

Viper takes DJ aside and apologizes by showing her a gigantic shirt that he’s purchased that says, “I’m with stupid.”  Who’s that shirt for?  Is DJ supposed to wear it?  It would be like a muumuu on her.  Even if it’s for Viper, it’s too damn big.  Seriously, that shirt’s fucking enormous.  Why’d they use such a big shirt?  It’s really distracting.

DJ tells him that the shirts fucking dumb as fuck and walks off, hella mad.

Joey’s french date shows up with some dude and Joey’s like, “what the fuck?”  Kimmie Gibbler explains to him that “mari,” which he kept interpreting as the french chick’s friend’s name, means “husband” in french.  So, there’s the big payoff to that sub-plot.  Joey made a date with a french chick and her husband.  [Insert menage a trois joke of your choosing here]

Michelle comes back to the table dressed like a rebellious youth and cops an attitude to everyone.  It’s not her usual shitty attitude, either.  This one seems more deliberately obnoxious.  I’m not really sure what’s happening here… I think it might relate to the outfits that Stephanie and Gia were looking at earlier?  Maybe Michelle’s trying to appear more mature to fit in with her older sister, or she might be trying to freak out Gia’s mom so she wont marry her dad.  Either way, it’s a pretty esoteric strategy and is clearly more about trying to score cheap laughs off of the audience than delivering a believable premise.  Where did she even get those clothes from?  Anyway, Danny comes back to the table and is like, “Michelle, what the fuck do you think you’re doing?  Change out of that contrived 50’s rebel clothing and wipe all that shit off your face right now!”  You know that shit’s gotten serious when Danny actually tells Michelle what to do instead of just cowtowing to her every whim.

Jesse finds Viper moping offstage and tells him to hurry up and get his shit together so they can proceed with their terrible performance.  Viper tells Jesse that he followed his nonsensical advice and it blew up in his face and now he’s too sad to play a bunch of crappy covers of outdated songs.  Motivated entirely by self-preservation, Jesse forces DJ to talk with Viper and shares a bunch of confusing metaphors with them about flowers and hailstorms that somehow prompts them to make up.  Having inexplicably succeeded in resolving their conflict in a matter of a few seconds, Jesse rounds up Viper so they can start the show. 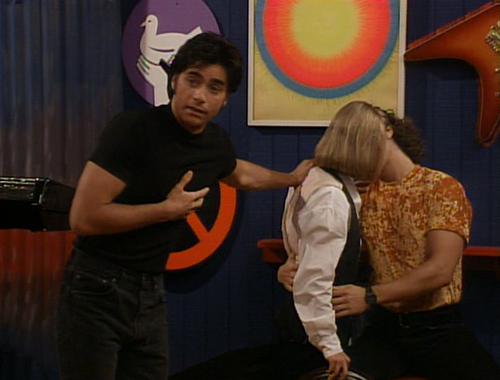 Hot Daddy and the Monkey Puppets perform and they’re not really any different than Jesse and the Rippers, especially since the Rippers never seemed to have a consistent roster anyway.  At least now that Viper’s around they’ve attributed some sort of identity to a band member for once.  Also, they have a cello player!

After the performance, Michelle, now dressed in her regular clothes again, has a very special talk with Danny wherein he asks why she was dressed like a hooligan and she tells him that it’s because she doesn’t want him to marry Gia’s mom. Ok, so I guess her intention was too scare her off.  I’m glad we got that sorted out.  Anyway, Danny asks Stephanie if she told Michelle that he was going to marry Gia’s mom and Michelle starts bitching and moaning about how she was excluded from Stephanie and her friends activities.  The music comes on as Stephanie apologizes to Michelle about not allowing her to be the center of attention for once and agrees to spend a lot more time with her in the immediate future, then hugs are exchanged.

Michelle gives Danny permission to marry Gia’s mom and he tells her that they’ve only gone on a few dates and, even though she’s got some grade A snatch, he’ll be sure to make sure that his entire pushy obnoxious family approves before making any big decisions.

Hot Daddy and the Monkey Puppets finish the break that they were taking so those last few plot threads could be tied up and then proceed to butcher “I’ll Take You There” for an enthusiastic crowd.  Everyone dances around like a bunch of chumps and the performance plays on through the credits.