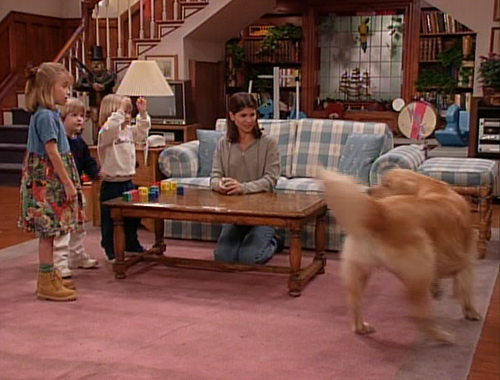 Pre-Credits Gag: Michelle shows Becky and the twins some new tricks that she’s taught Comet.  It’s supposed to be impressive that she’s only using hand signals and no words even though dogs can’t understand words anyway.  Regardless, the audience is pretty amazed.  I’m amazed by how easily amazed the audience has always been.  The twins are pleased to learn that their inability to deliver coherent language wont prevent them from making the dog do tricks but then they start gesticulating wildly, which confuses the dog quite a bit.

Nelson comes over to see DJ and Michelle makes a bunch of really shitty and insensitive remarks about how DJ dumped him, right to his face.  DJ comes downstairs and wants to know why Nelson is there and he tells her that his cousin is in town coordinating the Queen’s reception and that he wants DJ to come with him. DJ expresses excitement about meeting the Queen and then Joey enters the scene just to tool around but then Nelson invites him to come to the reception, too, because his cousin needs a date, which is, like, the worst plan I’ve ever heard.  I guess Nelson really hates his cousin.  And the Queen. 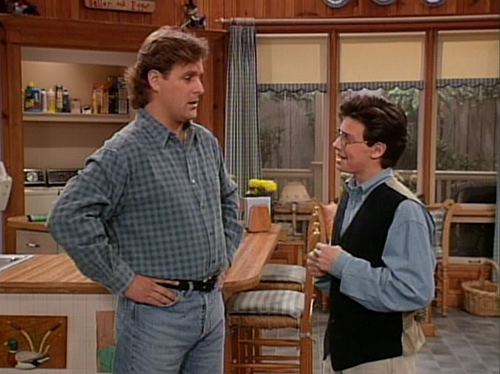 Kimmie Gibbler comes over and introduces everyone to her new boyfriend, Dwayne.  He’s dressed like some clueless costumer’s rendition of a 90’s slacker and every time someone says something to him he just shrugs and says, “whatever.”  So already he’s almost a fully developed character by this shows standards. 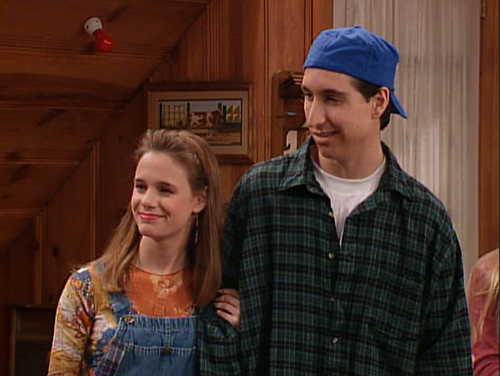 Kimmie Gibbler tells everyone that he’s training to be a plumber, fleshing him out even further.  Whoa, whoa, slow down, Full House!  According to the character profile of everyone else on this series, he can only have a maximum of 4 traits, so they’d really better save some for later.

Danny comes in and tells DJ that she got a letter from Stanford.  She gets all excited even though it’s just a regular-sized envelope, which always means that you didn’t get in.  Acceptance letters come in big packages.  That’s one of those facts that tv shows always ignore.  Anyway, it turns out that DJ didn’t get accepted into Stanford (so the envelope is actually authentic.  Take that, me!), but Danny tells her that it’s ok because she already got into Berkeley, so if the show gets picked up for another Season it’ll still be easy for her to be a regular cast member.  Regardless of the fact that she’s already been accepted to one of the top schools in the country, DJ is pretty disappointed by her rejection from Stanford, most likely because she comes from a woefully entitled family that never prepared her for any type of rejection. 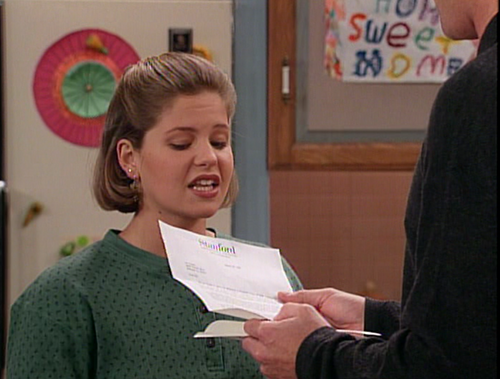 DJ sulks in her room and then Kimmie Gibbler comes in and says that she didn’t get into Stanford, either, but everyone’s just like, “yeah, no shit.  You’re a fucking know nothing.”  Jesse and Stephanie continue to console DJ while making shitty remarks towards Kimmie Gibbler and then Kimmie Gibbler’s like, “for fucks sake, you guys, I didn’t get into any colleges at all and DJ’s gonna be all successful and leave me behind and my whole life is totally not worth shit.  Could you guys give me a break and stop treating me like fucking garbage, just this once.” 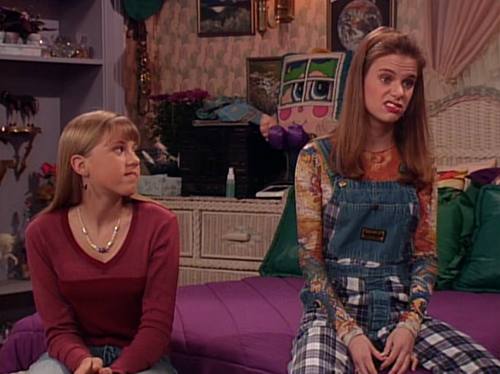 For probably the first time ever, the audience goes “aww” for Kimmie Gibbler’s sake as she walks out of the room, but Jesse is still smiling at her misery, like a complete asshole.

As DJ sits and enjoys a sandwich, Nelson comes over with a book for Joey with the hope that it will prepare him to not make a total asshole of himself when he meets the Queen.  Yeah, good luck with that.  The only way to prevent Joey from fucking up everything when he meets the Queen is to not invite him to meet the Queen.  DJ tells Nelson that she’s feeling a little better about being rejected from Stanford and then he shows her some fancy diamond earrings that she can wear when she meets the Queen, which lightens her mood even more.  The phone rings and it’s Kimmie Gibbler, who’s calling from Reno because she’s about to marry her incredibly uninteresting boyfriend. 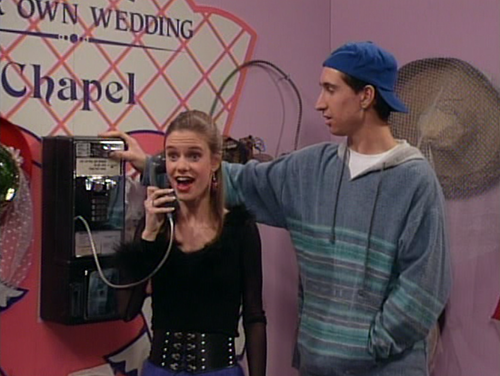 DJ, struggling to assess what the fuck is even going on, attempts to stall the ceremony by telling Kimmie Gibbler that she wants to be a part of it and is heading to Reno to join them.  She gets off the phone and starts to look into when the next plane to Reno is but then Nelson’s like, “we’ll just take my plane.  I’m real rich, remember?  That’s, like, my whole character.”  DJ agrees but decides that she has to write her family a note before leaving so she writes, “Kimmie’s getting married.  Went to Reno with Nelson.  Love, DJ” on a piece of paper and leaves it on the counter.  Honestly, as one of DJ’s parents, what would you make of a note like that?  I mean, really? Would that make you worry less than just not knowing where she is at all?  Anyway, it doesn’t matter because the minute that DJ leaves, the dog starts chewing on the note, which may or may not be a plot device… 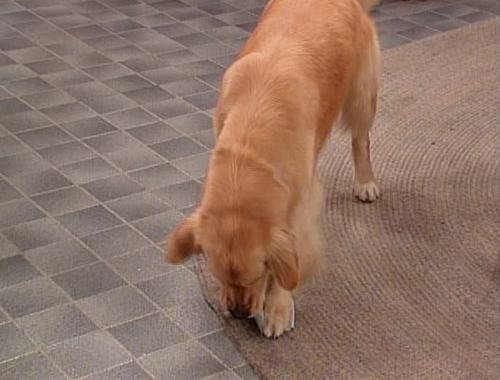 Joey prepares for his meeting with the Queen as several other cast members convene in the dining room.  Stephanie comes down and sees the box that Nelson brought DJ’s earrings in and assumes that it’s a present for her but then as soon as she sees that it’s empty she gives it to Becky, saying that it’s for her, which is one of those moments that really shines a spotlight on what a bunch of pricks these people are.

Michelle finds the chewed up note and gives it to Danny, who deduces from it’s weathered condition and mostly illegible state that it’s a letter saying that DJ has gone to Reno to marry Nelson. 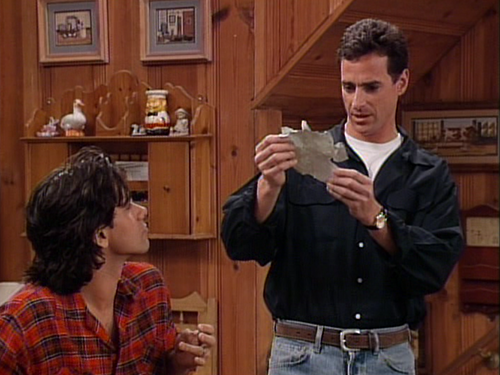 Everyone speculates that DJ must have decided to marry Nelson because she didn’t get into Stanford and that the empty jewelery box had contained an engagement ring.  Jesse and Danny decide to head to the airport to catch a flight to Reno even though it’s about a 3 hour drive from San Francisco so it wouldn’t really save much time to fly, especially if there wasn’t a flight leaving right when you got to the airport, which there probably wouldn’t be.

Joey totally fails to show his date a good time at the Queen’s reception, which wasn’t, like, totally predictable or anything.  It’s weird that Nelson agreed to miss meeting the Queen so that he could help DJ stop Kimmie Gibbler from getting married.  Not only does that seem like a pretty big event to pass up, but he also totally stuck his cousin alone with Joey.  It’s also weird that this is even happening at all.  I mean, really, where did this premise come from? 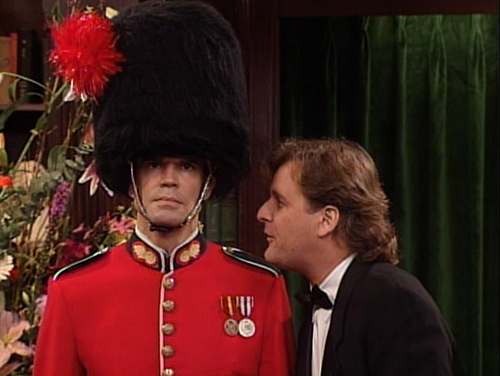 After Joey harasses one of those palace guards (which is, like, the most obligatory British culture gag that exists), the Queen arrives and everyone lines up to meet her.  It’s not the real Queen.  It’s just some actress.  Wouldn’t that have been totally crazy if the Queen of England had made a guest appearance on this totally worthless show?  I would have taken a big shit right in my pants if that had happened, I’d have been so surprised. 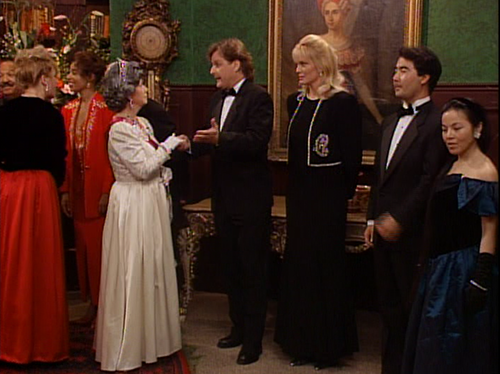 Joey rambles at her and pulls her glove off because there was just no way that he was going to conduct himself appropriately during this interaction.  Although that was bad, it wasn’t excruciating, so after the meeting Joey remembers that he was supposed to photograph the Queen for Michelle so he reaches into his coat and yells, “nobody move! I just want to get one shot!” which, unsurprisingly, leads to the security staff forcing him onto the ground.  Although that set up was totally ridiculous, it is pretty neat to see Joey being forcibly restrained.  Unfortunately, this was before Gitmo, or this could have been the best storyline ever.  I’m totally anti-Gitmo, by the way.  Except for this one case, where it would have been great. 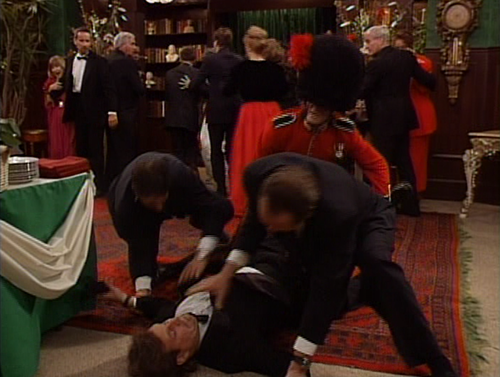 Kimmie Gibbler tries to decide which ridiculous theme wedding to choose but her boyfriend just says, “whatever” whenever she asks his opinion.  DJ pulls her aside and tries to talk some sense into her because this wedding is obviously a fucking terrible idea but Kimmie Gibbler just deflects her suggestions and decides to go ahead with the Friday the 13th-themed wedding. 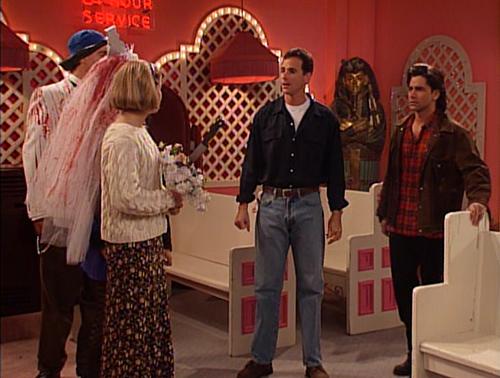 As soon as the ceremony begins, Danny and Jesse run in to stop it.  Never mind how they found this particular wedding chapel, by the way.  They are informed that it’s Kimmie Gibbler’s wedding, not DJ’s, and then they kind of don’t give a fuck about what’s going on anymore.  DJ pleads with them to try to persuade Kimmie Gibbler not to get married so Danny pulls out the notes he’d prepared for his very special talk with DJ when he thought that she was the one who was getting married.  Even though it’s abundantly clear that Danny and Jesse don’t give a fuck about Kimmie Gibbler or what happens to her, they sort of half-assedly manage to advise her that she’s getting married for the wrong reasons.  DJ finally intervenes and the music comes on as she convinces Kimmie Gibbler that she has other options in life.  Kimmie Gibbler tells DJ that she’s gonna miss her hella bad when she goes off to attend college and actually do something with her life but DJ assures her that she’ll always be her friend, even if she’s just going to be a terrible burden for the rest of their lives (much like Joey and Danny’s relationship), then they hug and the audience goes, “aww.” 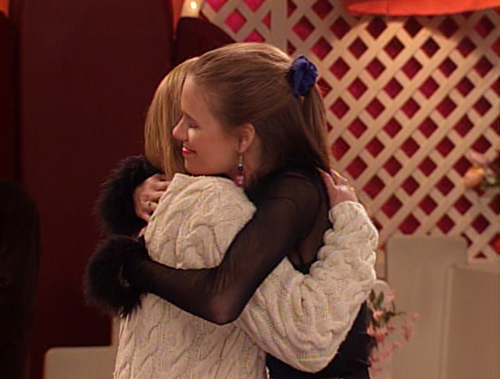 Jesse pulls Dwayne aside to tell him that the wedding’s off and Dwayne says, “whatever.”  That’s literally the only thing he’s said this entire episode.  I wish that I could say that he’s the worst character ever but he’s probably not even in the top 10.

FHR Wrap-up party update:  Don’t forget to RSVP for the event on Facebook!  It’s in San Francisco on Saturday, December 21st at 7 PM!  It helps with the booking if people RSVP!  And invite people!  I thought that I could send invites out to all the fans of the page but I guess I can’t because Facebook is dumb.  Also, I’ve officially booked the final close-out event in Portland, Oregon.  It’s at the Waypost on Friday, January 24th at 9 PM.  That’s one week after the review of the series finale, and the day that Season 8 Reviewed goes up.  I’ve got some fun plans for bonus posts to wrap up the blog with, so more on that soon, too.