I feel like I’m a senior in high school and I already took the SATs and got into college and all that shit and now I’m just waiting for the year to be over because I’m so close and it pretty much doesn’t even matter anymore.  Senioritis, they call it.  After this episode there are only two more…  can’t we just say I reviewed them all? Do we really have to go through these last ones?  Haven’t I done enough???

Pre-Credits Gag:  Michelle refuses to help DJ do the dishes but then DJ hustles her in a game of jacks so Michelle has to do them all herself.

Stephanie walks into DJ’s room and tells her about how her vag is all moist for this guy named Ryan at her school.  Guys named Ryan are known for their virility and dashing good looks, after all.  Stephanie says that she’s too lame and pathetic to talk to him but DJ urges her to invite him to the dance that’s coming up.

Danny walks in with a big box of Spam that he’s found in Joey’s room and is planning to donate to the food drive at Stephanie’s school later, which may or may not be a convenient plot device.  I guess we’ll just have to wait and see.

Speaking of convenient plot devices, Jesse gets a medical check-up in the dining room for some reason.  I guess no one could be bothered to build a doctors office set.  The doctor tells Jesse that his blood pressure is high and asks if he’s been under a lot of stress lately.  For reals?  That motherfucker is the no-workingest, responsibility-shirkingest piece of shit who ever lived, and he’s got high blood pressure?  Maybe that’s why he’s never put any effort into anything his entire life, because he’d drop dead of a heart attack the second a single bead of hard-earned sweat was produced from his greasy brow.  Anyway, the doctor tells him that his insurance premium is gonna go up if he can’t get his blood pressure down in the next week so Jesse has to learn to relax before then.  Thanks, Obama!

Gia and Stephanie spot Ryan in the hallways and Stephanie’s all, “I want that schlong so bad.”  Stephanie gathers up her courage and asks him out and he’s like, “I don’t even know who you are but, yeah, sure, why not?” and then Stephanie b-lines it outta there before he’s able to learn more about her personality. Good move!

Jesse sets up a hammock in the backyard because laying in a hammock is totally a textbook method for lowering one’s blood pressure.  It’s in all the medical journals!  Just as he’s settling into being even less productive than he usually is, he is startled by the sound of bagpipes emanating from Kimmie Gibbler’s yard.  He investigates and quickly learns that Kimmei Gibbler is practicing bagpipes for an upcoming Scottish music festival. 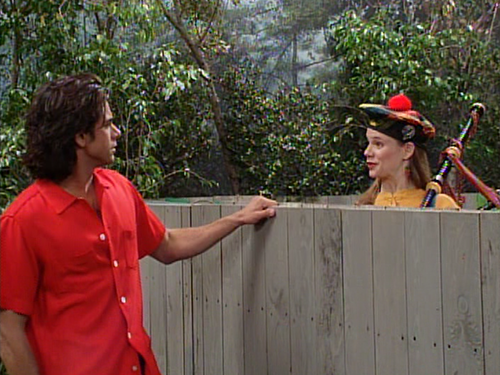 He orders her to stop practicing but she just tells him to go fuck himself so he decides to start a noise battle with her.  He has Joey help him set up a sound system and plans to bombard Kimmie Gibbler with obnoxious sampled sounds that he’s programmed into his keyboard.

Jesse’s ignores Joey fellatious solution and instead begins his noise battle with Kimmie Gibbler, who seems prepared to retaliate after the initial onslaught occurs.

Michelle challenges DJ to a hula hooping competition and wagers more chores but then DJ’s like, “bitch, I’m the hula hoop muthafuckin master!”

Stephanie comes downstairs and waits for her date to show up and then there’s a time lapse of her building with blocks to show how long she’s waiting, which is probably the most clever bit of visual storytelling that’s ever occurred on the series.  That’s not to say that it’s very clever but rather that the bar has been set pretty goddamn low.

Eventually Danny comes in and checks on her and she says that she’s been stood up and then sad music plays as they hug.  Ha ha, what a stupid loser!  I’m glad that, even at the end of the series, this show can deliver pretty good laughs on occasion. 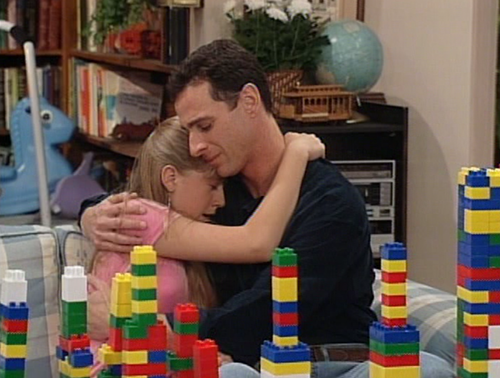 At school, Stephanie bitches to Gia about getting stood up.  She spots Ryan in the hallway and prepares to tell him off but then she punks out and runs into the bathroom.  While she’s in there, crying and shitting, Danny walks through the hallways carrying the box of Spam that he just happens to be donating to the school’s food drive at that very moment.  If that isn’t already a big enough coincidence, Ryan is approached right then by one of his friends, who addresses him by name and reminds him about their track practice later, which is exactly enough information to allow Danny to identify him.

Danny approaches Ryan and tells him that he’s Stephanie’s dad.  Ryan explains that he and his friends decided to go to the movies instead of the dance, which is a lot nicer than admitting that he backed out because Stephanie’s face looks like the inside of a dog’s asshole (which is clearly the real explanation), but that doesn’t stop Danny from telling Ryan that Stephanie sat on the couch all night, waiting for him and crying.  Oh my goodness, this shit is unbelievable!  As if getting stood up isn’t humiliating enough, having your dad come to your school and give the guy who stood you up a stern talking to while he describes how sad and pathetic you were is some shit that you would never recover from.  You’d have to change school districts after some shit like that.

Jesse hears more horrible noises emanating from Kimmie Gibbler’s back yard and she pops up and tells him that she borrowed an ostrich from her uncle and, since it’s mating season, the creature will be making guttural sounds of unrequited lust for the next 8 weeks.  Jesse rants about the situation while he stands next to the fence and then he’s bitten by an ostrich puppet.  The puppet’s actually not half bad.  That’s not to say that it’s a great effect but rather that the bar has been set pretty goddamn low.

Michelle confronts DJ with a double-or-nothing challenge to settle all the bets that she’d lost previously.  DJ agrees without even knowing what the challenge is and then it turns out to be a limbo competition.  DJ claims that the challenge is unfair and then one of the twins says, “how low can you go,” which is a pretty good mantra for this whole final Season, or, really, the entire series.  Anyway, Michelle wins the challenge.

Stephanie comes home and she’s all excited because Ryan apologized to her and offered to buy her a pizza at the mall.  Danny alludes to being responsible for Ryan’s change of behavior but doesn’t overtly take credit. Just then, Gia barges into the house without knocking or anything and tells Stephanie that the whole school knows that Danny confronted Ryan and made him apologize to Stephanie.  There’s also a game-of-telephone-esque exaggeration of how the scene played out that’s accumulated, but it doesn’t nullify the fact that Danny’s intervention is straight up humiliating for Stephanie.  The girls all chastise Danny, who defends himself by apologizing pathetically and then walking away all hangdog style, which makes the audience go, “aww.”  Well, I’m glad that they actually acknowledged how fucked up it was for Danny to get involved like that.  You can never tell how things are going to play out on this shitty, backwards-ass show.

Stephanie wonders how to handle her scheduled pizza date with Ryan and Gia suggests that she stand him up since he allegedly doesn’t want to meet up with her anyway.

As Jesse begins to plan construction of a large soundproof wall in the back yard, he is pulled over the fence by the ostrich, who starts raping him.

Becky comes into the backyard in time to see Jesse being rescued by Joey and she decides to intervene.  She explains to Kimmie Gibbler that Jesse needs it to be quiet because he’s got high blood pressure and Kimmie Gibbler’s like, “well why the fuck didn’t he ever just say that?  He just started yelling at me and then bombarded me with obnoxious prerecorded sounds.  Maybe the reason that he has high blood pressure is because he attempts to resolve any given situation with an over-the-top conflict rather than a simple straightforward exchange of words.” Kimmie Gibbler agrees to end the conflict if Jesse will give him a hug, which Jesse begrudgingly agrees to because he resents Kimmie Gibbler for being the only tolerable character on this entire show.

Ryan comes by the full house and tells Danny that Stephanie stood him up.  Stephanie comes downstairs and engages Ryan in conversation while Danny stands there, listening in and making shitty jokes. 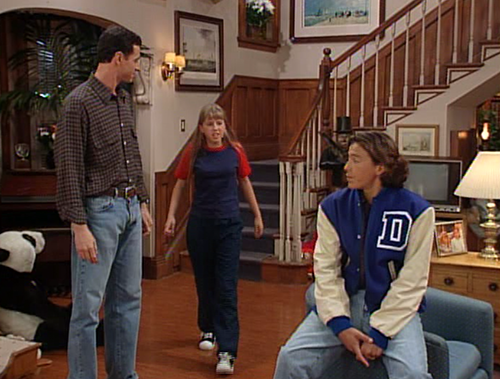 Ryan explains that he asked her out for pizza because he felt like an asshole, not because Danny made him.  Stephanie realizes that she was just as big a piece of shit as Ryan was and then they agree to start over by going out for pizza with a clean slate.

Immediately after they leave, Stephanie walks back into the house and hugs Danny.  He asks why she’s hugging him and she says it’s for being an “involved, loving father who sticks up for his daughter.”  So I guess the lesson here is that it’s ok to walk into your child’s school and fight their battles for them, even if it’s going to totally humiliate them and cost them the respect of their peers?  What the fuck kind of lesson is that?