Kimmie Gibbler’s no-good, soon-to-be-ex-husband fucks up when he’s supposed to pick up their daughter’s birthday cake and accidentally gets one that’s meant for a priest who is retiring from a lifetime of molesting young boys.

I know that not all priests molest young boys and everything but I just want you all to look at that picture one more time and try to tell me that the creators didn’t go out of their way to pick the guy with the most boy molestingest face imaginable to put on that cake.

There’s just no way that guy hasn’t molested a lot of young boys.

So, anyway, Ramona is turning 13 and her big wish is for her parents to get along.  They vow to make this wish come true and then they give her some fancy shoes that she has a hard time walking in. 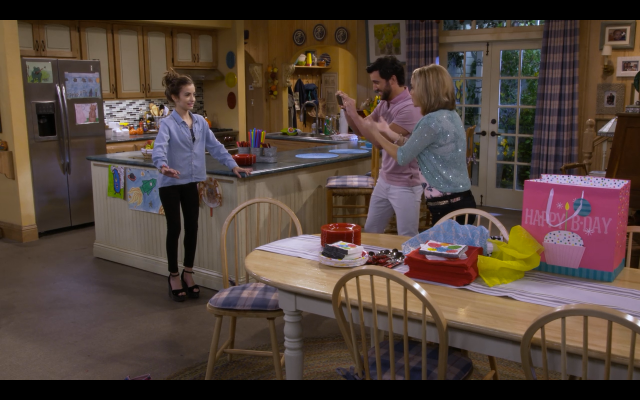 Meanwhile, down at DJ’s pet clinic, Steve shows up and he’s like please baby baby please baby baby baby please but DJ is like, “remember how my husband got burned alive in a fire?  I’m still all fucked up over that.  We can hang out if you want but there’s no way I’m lettin’ you stick it in,” and Steve is down, probably because not having sex with DJ gives him fond memories of when they dated in high school.  Matt, the new guy that DJ works with, enters the scene with Steve’s dog and Steve is like who the fuck is this mufucka? 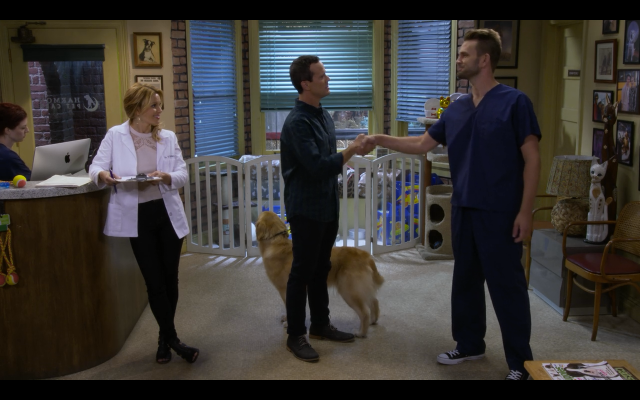 Steve gets all threatened by Matt’s masculine swagger and decides that the best way to prevent him from having sexual tension with DJ is to fix him up with Kimmie Gibbler.  DJ actually thinks that setting Matt up with Kimmie Gibbler is a good idea so she invites him to Ramona’s party because nothing makes a girl’s 13th birthday more memorable than a strange man coming over to fuck her mom.

DJ wonders why she feels compelled to clean the fuller house before the kids’ party and then there’s an extended close-up of her dusting a terrifying photo of Danny’s horrible face.

Man, if I had a picture like that in my place I’d never sleep again.  DJ’s middle kid comes in and starts talking about how much trouble he’s having with training the dog to stop shitting in the house.  Why is this his responsibility?  I know that he should be learning how to take care of the dog and everything but it seems pretty obvious that this kid doesn’t-and shouldn’t be expected to-have the capacity to housetrain a dog.  He’s like 8 years old.  Regardless, DJ’s just like, handle that shit, with no help from me.

Ramona comes home with her parents and makes a meta-joke about the dress that she just bought, which was designed by the Olsen twins.  It’s slightly more subtle than the show’s last onscreen comment about the Olsen twins because the actors don’t all stop and stare at the camera for 30 seconds this time.

Stephanie walks into DJ’s oldest kid’s room as he covers himself with cheap cologne and stupid accessories because he hella wants to bang one of Ramona’s friends.  Stephanie talks him into removing all of the stupid accessories and I guess it’s supposed to be a valuable life lesson about being who you are or whatever but it could also just be about choosing better accessories.  I kind of think that he should have kept the huge gold chain, tho.

There’s a whole scene with DJ’s middle kid making the dog sit on a little plastic potty that’s entirely designed to make us go, “aww.”  It is a pretty cute dog but even still, I feel like my intelligence is being insulted here.

Ramona gets all dressed up for her party and then, while she takes pictures with her parents, Matt shows up and he and DJ share some more of that delightful will-they-or-won’t-they tension.  It’s done well enough to almost make you give a shit about what will happen.  Matt is supposed to be introduced to Kimmie Gibbler but she and Fernando are all groping each other and shit while they get their photos taken together so Matt’s like why you trynna hook me up with some woman who’s still all up on her ex-husband?  Good question!

The next thing we see is Ramona’s birthday party, which looks pretty alright.  Where is this supposed to be exactly?  I’m not really clear on that… 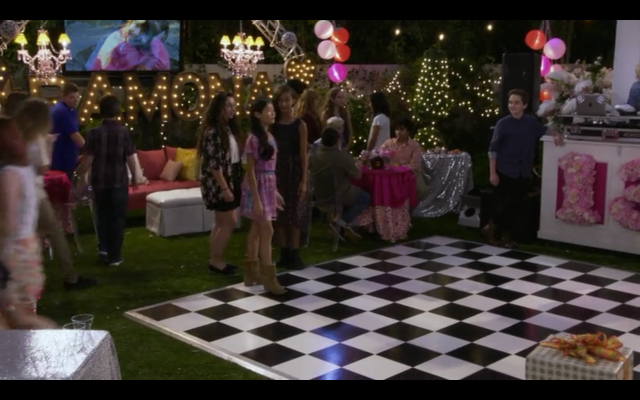 Anyway, DJ’s oldest kid tries to hit on Ramona’s friend, Lola, and he fucks it up because he’s a sorry ass chump.  Just as Stephanie prepares to subject everyone to her tasteless electronic garbage music the power goes out, denying the one true cure for all of these poor kids who are clearly suffering from dance fever.  Stephanie tries to salvage the party by playing music from her iphone but it doesn’t work because it’s a terrible idea.

Inside the house, DJ’s middle kid worries that the power going out is a sign of the zombie apocalypse.  Oh, so I guess that means that the party was taking place in the backyard.  I couldn’t really tell.  Anyway, DJ’s middle kid interrogates DJ to find out if she’s a zombie and then he starts wondering if the baby is a zombie, which the audience really finds hilarious for some reason, probably just because they like looking at the baby.

Stephanie frantically tries to get the party back on track and suggests that everyone enjoys some cake while they wait for the power to come back on.  Unfortunately, she takes the cover off the cake only to discover that it’s melted. 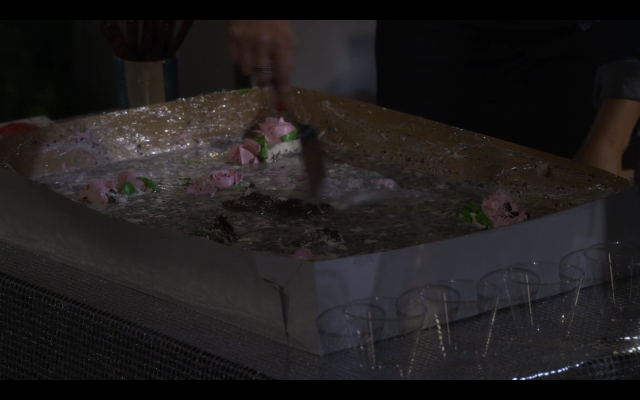 Is the cake melting supposed to be related to the power going out, or are these problems unrelated?  It seems really odd to me that no one would have thought about an ice cream cake melting.  How long was it sitting out there?  Anyway, long story short, Stephanie kind of flails around and tries to make the party suck less ass but it’s a lost cause.

DJ and Matt find Kimmie Gibbler standing alone in the kitchen so DJ takes it as an opportunity to introduce them, in a sexy way.  Unfortunately, Kimmie Gibbler immediately starts choking but Matt has the good sense to administer the Heimlich maneuver. 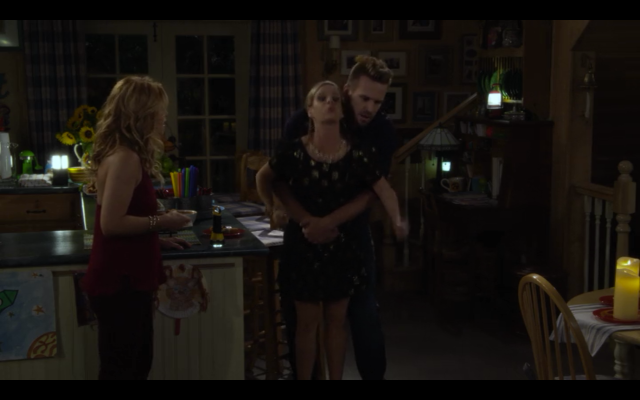 Kimmie Gibbler hugs Matt with gratitude after he saves her life but, wouldn’t you know it?  Fernando walks in right then and misinterprets their interaction and then, in true cartoon Latin stereotype fashion, he challenges Matt to like a duel or something.

DJ and Kimme Gibbler explain that Matt was saving Kimmie Gibbler from choking and then Fernando starts thanking and kissing him.  Man, this guy can’t turn it down a notch for even one second.

Matt decides to leave so DJ walks him out and the sexual tension between them as they say goodbye is like a sauna, you guys.  It’s just that hot and steamy.  Right as Matt is about to whip it out, DJ opens the front door and Steve is standing there, fully ready to murder DJ if she won’t return his affections.  Seriously, I like Steve and everything, but he’s being a real fucking creep right here.

Ramona walks in on her parents arguing and she’s like wah wah wah my party sucks a fat dick and my stupid parents won’t stop fighting and then she runs upstairs to pout like a stupid baby and the audience kind of softly goes, “aww.”  This show is all about acknowledging what was bad about the original show while still doing it anyway.  Like, we’re supposed to know that it’s hokey when the audience goes, “aww” but if they do it kinds of subtly it’s ok, or like a throwback or something. 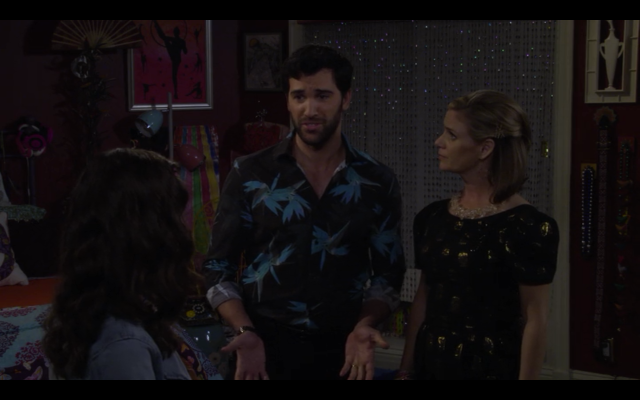 So Kimmie Gibbler and Fernando go up to Ramona’s room and they’re like sorry that we’re such shitty parents.  Ramona says that she wishes that they could get along and they’re pretty real about how they have a really dysfunctional relationship but they still love her and want to be good parents.  I actually think that this is fairly well done.  Like, they clearly still wanna bang each other but they can’t work it out as married people so they’re trying to balance that out because they’re both devoted to their kid.  That’s some real shit that happens and it’s presented here as a complicated situation, not one that has a simple solution.  Again, I’m basing my praise off of incredibly low standards but, all things considered, I thought that this was not terrible.

Everyone from the party comes into Ramona’s room and sings her happy birthday while carrying cupcakes with candles in them.  I’m not sure where the cupcakes came from but whatever.  Just as things seem to be turning out ok the power comes back on because everyone has to get what they want all the time on these shows and then Ramona alludes to her birthday wish being for her parents to get back together. That’s probably what will end up happening, if for no other reason than to prove me wrong for trying to give this show some credit.

All the kids start dancing to Stephanie’s horrible doo doo beats and then DJ’s oldest kid tries asks Ramona’s friend that he has a boner for if he can dance near her and she’s like I don’t give a fuck what you do, which he takes as a victory.

After the party, Ramona expresses her gratitude to her parents for making sure that she had an only kind of shitty birthday and then she leaves them to have a moment alone.  They sorta patch things up and then they start dry humping and DJ’s middle kid sees the whole thing, which will surely cause him to be sexually dysfunctional in a few years.  I mean, he might be already.  He was hiding in the doghouse with that dog and there was some serious barking going on.  Anyway, Kimmie Gibbler tells him that he has to keep the dry-humping a secret because it might make for a somewhat intriguing multi-part storyline, what with this Netflix binge-all-the-episodes-at-once model and everything, and then DJ comes out and asks what’s going on and no one will tell her.  What a cliffhanger! 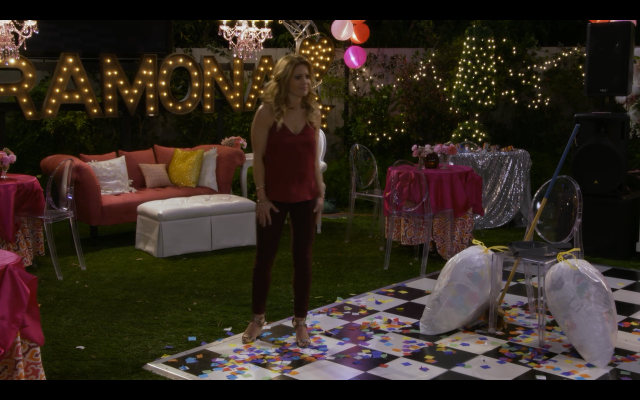 This entry was posted in Fuller House. Bookmark the permalink.