Since we’re three for three here, I’m just going to assume that the pre-credits opening bits are going to be a staple for at least the rest of the Season.  I don’t remember ever seeing these before but, like I’ve said, I’ve only ever really watched this show in syndication and syndicated shows always get chopped up for ad space, with superfluous bits like these bumpers always being the first to go.  I’m pretty sure they’re made to be a sort of a hook, but they also have to be non-integral to the plot because many viewers would probably miss them if they didn’t tune in right on time.  I think I might make a little section for them at the start of each review… Geez, I sure hope that anyone reading this appreciates the amount of time I spend thinking about this shit.

So in this opener the family is getting ready to go to a Halloween costume contest, which is the only time there is any mention of Halloween this episode.  The Dad’s dress up like the 3 Stooges and do a little routine just to make those poor dead performers roll over in their graves.  The climax of the scene is when the baby comes out dressed like a pumpkin and says, “candy.”  So far all of these bumpers have had punchlines in which the baby says a word or sticks her tongue out or something.  Honestly, in real life I’m a sucker for babies, but there’s something about creating these corny ass routines centered around banal baby tricks that is just so entirely devoid of charm.  Maybe it’s the blatant pandering but really I think it’s because of that ugly, ugly baby.  Anyway, yeah, she says, “candy” and then the credits come on.

Uncle Jesse’s cornball ass doo wop group reunite in the living room to rehearse an advertising jingle that Jesse’s trying to sell.  Joey tries to horn in on their act but is swiftly rejected.  Rehearsal is immediately interrupted yet again by Danny bringing the kids home from the dentist with the news that Stephanie has her first cavity.  What an intriguing plot device!  She comes in and sits on the steps looking sad and the audience goes, “aww,” so now it’s really clear what a big fucking deal it is.

She wonders out loud why she has to get a filling because it’s a baby tooth, which inspires some sparse laughter from the audience for some reason but actually sounds like a pretty valid question to me.  No one seems to give a fuck that all this emotional pandering is totally interrupting Uncle Jesse’s rehearsal but he eventually manages to redirect the attention back to his corny performance anyway.

The group get most of the way through their doo wop harmonizing about a theme park called Splash City before Joey interrupts them with a blues harmonica routine.  Why can’t one person in this fucking family be respectful of what someone else is doing just one time?  First Jesse gets interrupted by some melodramatic dental diagnosis then Joey just blatantly cuts in on their whole thing.  To top it all off, when Jesse finally finishes his routine and asks Stephanie what she thought of it, all she can talk about is her fucking tooth again.  What a family of assholes.

Later, Kimmie Gibbler takes advantage of Stephanie’s naïveté by telling her a bunch of horror stories about cavity treatments gone wrong.  Abruptly, Danny barges in and interrupts with an announcement because that’s the only way anyone tells anyone anything in this fucking house.  The big news is that Grandpa Katsopolis has come to visit.  You might be wondering who Grandpa Katsopolis could possibly be, and that would probably be because there’s never been any mention of the name Katsopolis before on this show.  Well, you see, in between Seasons they decided to change Jesse’s last name from Cochran to Katsopolis to better identify the character with John Stamos’ Greek heritage, so Grandpa Katsopolis is the father of Jesse and Pam, the show’s dead mom.  Jesse’s Mom also enters the scene, and is now played by a different actress than the woman from that multi-Grandma episode in Season 1.  So now Grandma Cochran is Grandma Katsopolis, and she looks completely different.  It’s also worth noting that Danny, who has dark hair, and Pam, who comes from a Greek family with dark hair, somehow had three blonde daughters.  But by now I suppose we can fairly assume that no one working on this show gave a fuck about anything, so why bother, right? 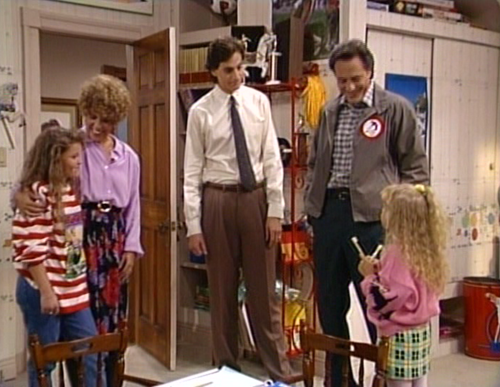 Later, Grandma and Grandpa have some quality time in the kitchen with Michelle and precious airtime is spent on them playing the “got your nose” game and the baby riding a rocking horse.  The grandparents’ characters are briefly developed as we learn that they may be old, but they still get down on some serious hot fucking.

Jesse comes home and immediately has his music career belittled by his father, who only cares about Jesse following in his exterminator footsteps.  Apparently Jesse’s exterminator job has been a family business all along and he regularly works alongside his father.  Who knew?  Anyway, Jesse’s too excited to talk about exterminating because he sold his lame Splash City jingle.  Everyone is overjoyed except for Jesse’s dad, who’s really hung up on the exterminator thing.

Later, Jesse has a heart-to-heart with his mom about deciding that he wants to quit the exterminator business to write shitty ass advertising jingles for a living.  Grandma comments on how it has always been Grandpa’s dream for Jesse to take over the family business, but she offers her support anyway.  Grandpa takes part in another family tradition by barging in on their conversation and Jesse tries to break the news to him gently.  They have a wacky miscommunication based on jumping to conclusions from unfinished sentences and Grandpa assumes that Jesse wants to become a partner in the exterminator business and gets all excited.  Jesse finally explains that he’s all about the music biz now and his dad has a big girly hissy fit and disowns him.

Danny reads to Michelle and prompts her to say words, each of which gets a laugh from the audience.  Why does the audience get so excited every time the baby says anything?   So then Jesse comes in and whines and cries about his Dad disowning him so Danny gives him an inspiring talk and tucks him into bed.

Stephanie has nightmares about going to the dentist so DJ gives her a heartwarming pep talk about facing her fears.  In the very next scene Stephanie is at the dentist and refuses to open her mouth, so I really have no ideas what purpose the preceding scene served.  Joey convinces the dentist to give him a minute alone with Stephanie in order to get her to cooperate.  You might think that a dentist would be qualified to handle these types of situations but, hey, whatever.  Finally, a shitty impression of the cowardly lion and a pep talk about courage does the job.

Jesse and his dad have another confrontation and they argue about their conflicting dreams until the music comes on and they realize how much they care about each other.  After a masculine hug is had, Stephanie barges in with her post-dental visit swag and declares that at her next birthday she wants a dentist instead of a clown.  It’s so great when all the plot threads in a story come together like that at the end. 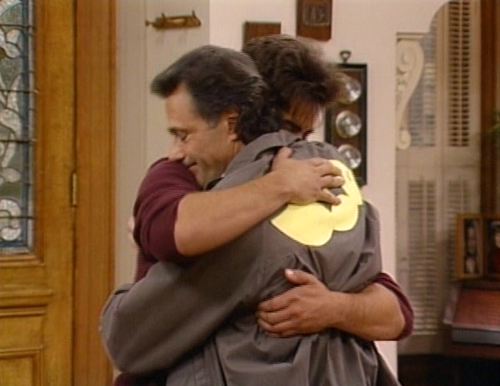