Season 1, Episode 9, “The Miracle of Thanksgiving”

This episode is very special because it’s the first holiday show of the series.  Danny wakes the uncles up early because Grandma is snowed in and can’t make them dinner like they’d planned.  I wonder if we’re ever gonna see Grandma again?  We keep hearing about her, but she hasn’t appeared onscreen for a while.  I guess it’s no big loss if we don’t because she was a pretty uninteresting Grandma.

Danny is buggin’ out because it’s the first Thanksgiving after his wife died and he doesn’t wanna heighten his daughters’ trauma by serving up a busted-ass dinner.  Joey tries to put his mind at ease by coining the catchphrase for this episode, which is “the miracle of Thanksgiving.” 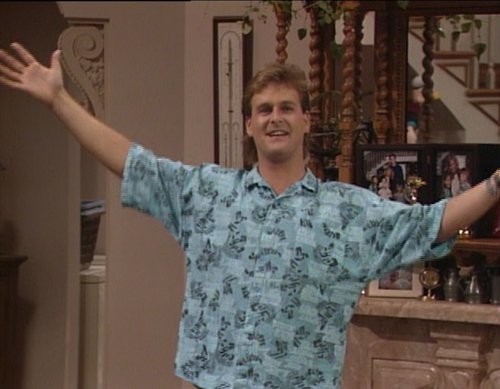 After he says “miracle” he makes a little trumpet sound.  He says it a lot, and it’s the most baffling catchphrase since the one about how much Jesse loves his turtle.  Hey, I wonder if we’re ever gonna see Bubba the turtle again? I guess he’s probably sittin’ in Tacoma with snowed in Grandma, wondering where it all went wrong.

So the dads spend some time trying to make the dinner themselves but quickly realize that it’s too hard.

They tell the kids that they’re all going to a restaurant and then DJ is all, “we never went to a restaurant when Mom was still alive…sniffle…”  so everyone decides to make dinner together as a family instead.

The making of the dinner is represented by a dance montage set to “Get Ready” by The Temptations. 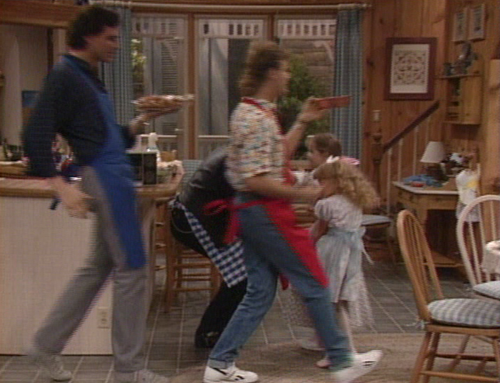 When the uncles go to carve the turkey, they discover that it’s frozen solid.  This is exactly like the housekeeping episode!  Maybe if this family would actually put a little elbow grease into the task at hand rather than having a dance montage they’d get some better results.  Besides, what’s the big deal with telling DJ that the turkey’s not done and they’ve gotta cook it some more?  What, her dead Mom never had to put the turkey back in the oven?  And how the fuck do you bring a frozen turkey to the dinner table without realizing it? 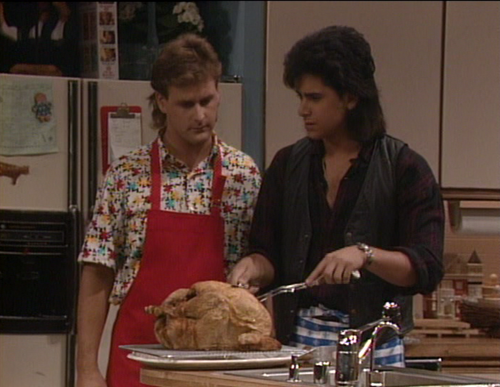 They put the turkey back in the oven and try to come up with a diversion when the doorbell rings.  Some ladies have lost their way and are afraid they won’t be able to bring their hot turkey to their dinner in time.

Inevitably, the dads immediately scheme to get their hands on that hot turkey.  First they try to lure them with sex appeal and then they offer them money, which says a lot about this show’s attitude towards women.  The ladies are almost persuaded by the money but then Joey runs into the room after getting his tongue stuck in a bottle that got stuck in a chair. 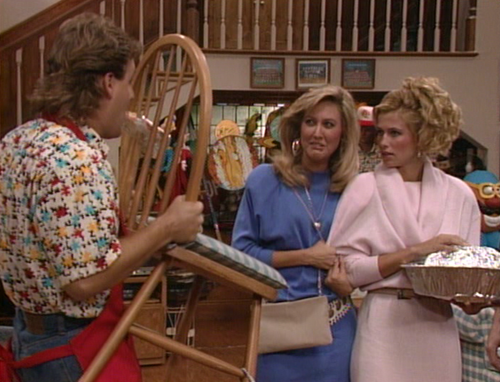 The ladies clear out and then Joey herds Danny and Jesse into the kitchen to show them that the turkey’s on fire.  How did a frozen turkey get completely burned in 5 minutes? 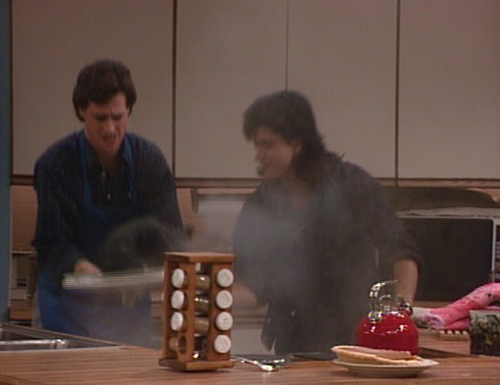 The kids get all upset, setting in motion a chain of touching moments.  First Danny consoles DJ and the music comes on.

Then Jesse consoles Stephanie by showing him his old family album. 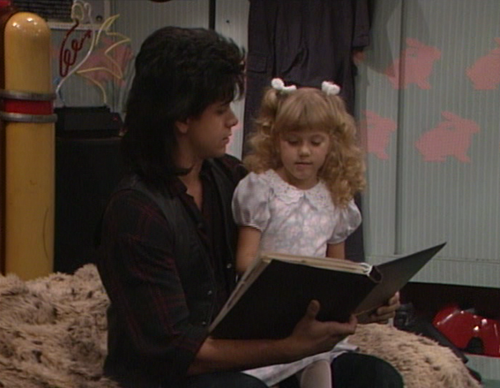 Then Jesse confides in Danny that he’s all upset about his dead sister, and the music comes on like you wouldn’t believe.  I guess since this is a holiday episode they thought they’d really pile on the touching moments.

So finally the family all sit together to eat their burned turkey.  While they’re saying grace Joey alludes to his estranged father’s 3 wives and his gambling addicted mother, which is actually kind of intriguing.  Any evidence as to what the hell is wrong with that guy is enough to get my attention.  Amen!

33 Responses to Season 1, Episode 9, “The Miracle of Thanksgiving”