Joey is all excited because he got hired to go on a comedy tour, but he feels bad about being away from the full house for two weeks.  The family tells him that it’s fine and then there is a lot of hugging.  Joey gets straight to work on rehearsing his shitty act but soon finds that he is constantly being interrupted because he lives in the living room.

He unsuccessfully tries to practice in several other rooms in the house before settling on the garage.  DJ comes down just in time for his impression of a fountain. 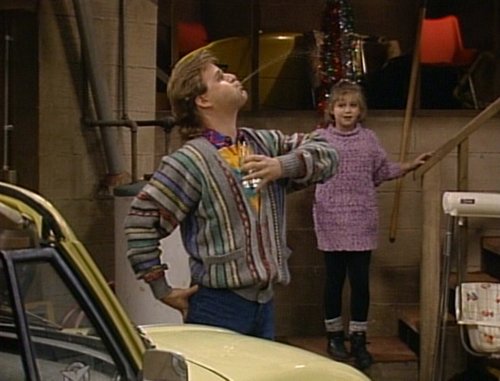 Joey and DJ commiserate about their crappy rooms, which leads to DJ calling a secret meeting with the rest of the family.

Everyone agrees that Joey needs his own room and tries to come up with a plan without him finding out.  Inevitably, Joey walks in on the secret meeting and ends up feeling like he’s being excluded from family activities.  Oh, what a misunderstanding!

In the morning we discover that Jesse is evolving into some sort of uber-housewife and Joey gets all butt-hurt over everyone preferring Jesse’s eggs to his.

For some reason everyone secretly planning to make Joey a new room leads to them blowing him off as he goes out of town and Joey leaves feeling alone and unloved.  Awww!

While Joey’s away Jesse abruptly discovers that he has to fill in for Joey’s weekly at-home daycare shift.  Like most of the conflicts on this show, this one could have been avoided with a quick and simple explanation, but, like most of the situations on the show, this one’s clearly only there to pad the episode.  The kids throw clothes at Jesse and then the next scene comes on.

Danny comes home late and Jesse furthers his housewife roll by giving him a big lecture about how he cooks and cleans and feels unappreciated.

After everything cools down Danny tells the family that he’s hiring contractors to build a new room for Joey.

Next thing you know Joey comes home to an empty alcove.

The family puts up a front of indifference towards him and when he asks where his stuff is they say they moved it into the garage.  Then Joey gets all pissed and starts yelling, which is actually pretty awesome.  He says his first funny line of the series, which is, “Am I still getting my mail here, or did you forward it to the gutter?”

Joey goes down to the garage to get his shit so he can move out, only to discover that it’s been converted to a rad new room for him. 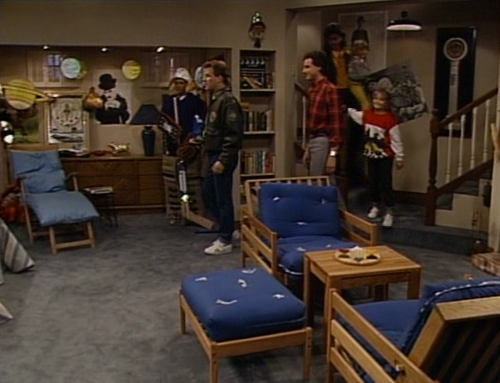 Joey feels all bad about getting upset even though the family was totally emotionally manipulating him into it.  Why can’t they just give him his new room without making him look like an asshole first?  Anyway, Joey is all touched and Danny says some nice words while the music comes on.  Everyone celebrates by playfully rolling around on Joey’s new bed. 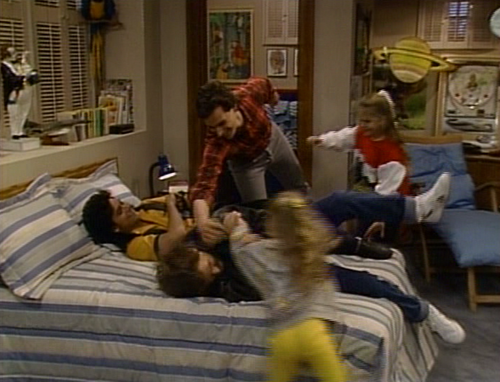