Oh, man, you better prepare yourself.  This one’s a fucking doozy. 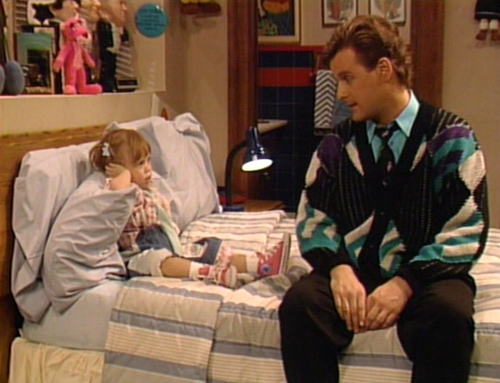 Pre-Credits Gag:  Joey does a bunch of shitty impressions for the baby.

Jesse and Joey come to breakfast in the morning lookin’ to’ up from the flo’ up because they stayed up all night writing an advertising jingle.  Abruptly, Kimmie Gibbler bursts through the door with suitcase in hand because she’s staying for the weekend.  This strikes a note of terror into the Tanner family’s hearts, marking the beginning of their aggressive intolerance towards Kimmie Gibbler, who they always sort of seemed to pay no mind towards before this point.  So, ok, now we have Jesse and Joey wrapping up an advertising jingle project and Kimmie Gibbler staying for the weekend.  Seems like a pretty full premise for a show that doesn’t usually pack a lot of story, right?  Yeah, just wait… 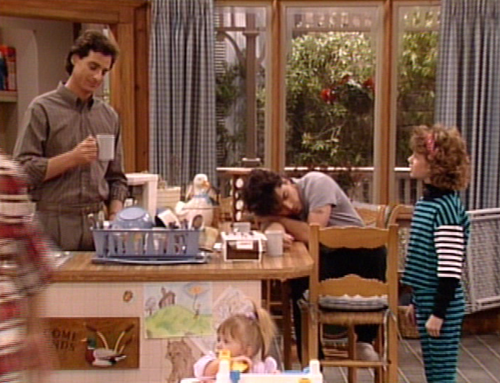 Cheryl drops by to see if Joey wants to spend the weekend skiing with her.  Remember Cheryl from a few episodes back, when the Dad’s had the triple date?  It seems like they’ve actually bothered to retain a tertiary character, although she does say that she and Joey have been dating for 2 months, which contradicts events in the previous episode in which Joey goes on a date for that charity auction.  But anyway, whatever, the point is that she and Joey are going skiing for the weekend.

DJ and Kimmie Gibbler sing “The Locomotion” into Jesse’s recording equipment until he catches them and discovers that they’ve taped over his advertising jingle.  He raises his voice at them, which leads to DJ manipulatively declaring that she’ll never go into Jesses room again and storming off.

Danny overhears the whole thing and tells Jesse that he overreacted and had better straighten things out with DJ.  Am I watching the fucking Twilight Zone here?  DJ totally fucked with Jesse’s livelihood and he’s not even allowed to get mad?  That’s some bullshit if you ask me.  I think the real problem here is that Danny’s so dedicated towards affirming his kids behavior that they just do whatever the fuck they want all the time.  How many times have we seen his kids walk on to the set of his show during a live taping?  And now they’re destroying their Uncles work and he’s not even allowed to get mad about it?  Bullshit.

So now we have Kimmie Gibbler staying for the weekend and a rift between Uncle Jesse and DJ.  Seems like a pretty full premise.  But, wait, in the next scene we have Stephanie feeling left out of DJ’s activities and seeking companionship from Michelle.  Michelle totally disses her and only agrees to spend time with her if she can ride Stephanie around like a horse.  How degrading!

Jesse calls DJ down to the living room and unveils a drum set that he’s purchased in order to patch up their relationship. 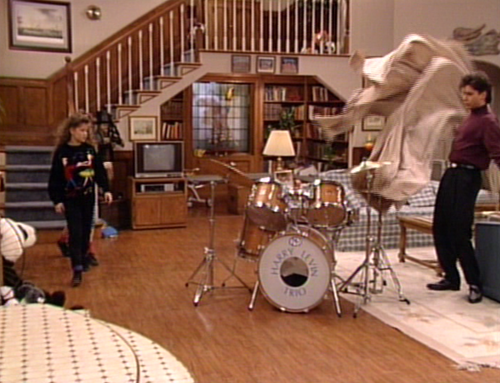 While he does a bad ass drumming demonstration, Grandpa barges in the door, followed by Grandma, who claims that grandpa is moving into the full house.  So, just to check in here, now we have Kimmie Gibbler staying for the weekend, Joey going skiing with Cheryl, Jesse and DJ patching things up over a new drum set, Stephanie vying for Michelle’s attention, and, finally, Grandpa moving into the full house.  Not to mention the fact that there’s progressively thickening fog formulating outside while all this is going on.

Danny comes home, sees the drum set and asks Jesse to follow him into the kitchen for a little talk.  While Jesse eats fried chicken, Danny tells him that he should have tried talking things out with DJ rather than buy her off.  How the fuck’s Jesse supposed to know that?  When is anyone on Full House ever expected to use logic for anything???   Anyway, Jesse tells DJ that her Dad is gonna make her give up the drums and then, in a semi-related moment, Grandma and Grandpa start fighting.  Grandma attempts to storm out of the full house but she soon discovers that the fog outside it too thick and everyone is now fogged in.

So, just to make sure we’re up to speed here, Kimmie Gibbler’s staying for the weekend, Jesse and Danny are having a parenting conflict over the way Jesse deals with DJ, Joey went skiing, Grandpa’s moving into the full house because he and Grandma are fighting, and everyone’s trapped inside the full house because of heavy fog.

Jesse uses reading the baby a bedtime story as an opportunity to make passive-aggressive jabs at Danny, going so far as to coerce the baby into calling Danny a “geeky giant.”

After hours, Cheryl drops Joey off at the full house because the fog was too thick for them to reach their ski destination.  I’m not really sure why she doesn’t stay there, too, if the fog is too thick for anyone to get anywhere.  I guess that since it’s a family show she can’t stay over, although you wouldn’t think  it by the way Joey totally reaches out and grabs her tit as he gives her a little peck goodbye.

Joey crawls into his bed, not knowing that Grandma is already sleeping in there.  Naturally, she assumes that Grandpa has come to make up and starts getting all frisky, which leads to some screaming and everyone rushing into the room.

Jesse witnesses Grandpa’s attempt to solve all their problems by buying Grandma gifts and realizes that he was doing the same thing with DJ.

Jesse tells Danny that he was right all along and then has a heart-to-heart talk with DJ about conflict resolution while the music plays.  He blames Grandpa’s shitty, bribe-based parenting and poor communication on his own issues with DJ and vows to do better than his lousy dad did.   DJ falls asleep while Jesse waxes philosophical and then the two cuddle up for the night, making for the most schlocky ending so far.

What a convoluted mess of an episode!  It featured nearly every cast-member and was completely directionless.  It’s really odd to me how a show that can so often conspicuously waste airtime with  successions of hugs or a baby eating popcorn would all of a sudden have an episode so completely crammed full of shit.  The storylines contained here could have made for at least 3 separate episodes.  And none of it went anywhere.  What did Kimmie Gibbler staying there have to do with anything?  Was Jesse ever able to recreate his jingle?  Why do I even bother wondering about this shit?

Firsts:  The Tanner family treat Kimmie Gibbler like shit all the time