Pre-Credits Gag:  Michelle sings along with a wind-up ballerina, creating a song where every word is “baby.”  She makes Uncle Jesse sing it, too, but then she interrupts him and sings it herself again.

Danny assembles the full house together at 7 am for Spring cleaning, which is pretty goddamn fascist if you ask me.  Just to drive the point home, there’s another installment of the reoccurring joke in which Danny brainwashes Michelle with anti-dirt propaganda.

As Stephanie sorts old toys to give away to charity, Michelle tries to purloin Mr. Bear.  Stephanie intercepts and explains that Mr. Bear is very important to her just as Joey enters the room with a big garbage bag to take the old toys away in.

Jesse enters Danny’s freshly-cleaned kitchen and accidentally breaks a handle off of a cabinet door.  Danny totally flips out but Jesse assures him that he’s going to fix it.  When Jesse asks Michelle if she wants to drive to the hardware store with him she refuses with the explanation of, “car dirty.”  I bet Howard Hughes’ dad was a lot like Danny.

Stephanie gets all freaked out because she can’t find Mr. Bear.  As Joey helps her retrace her steps, he realizes that he might have accidentally given Mr. Bear to charity.  Once Stephanie is left alone, she actually prays to God to bring Mr. Bear back.  This is pretty interesting to me because this show always seems like it follows some sort of Christian Fundamentalist set of values but they never really discuss religion, probably for the sake of marketability.  So even though religion is never directly addressed, you know there’s some God-fearing value set behind everything, kind of like Family Circus cartoons.  I wonder if this is the only time in the whole series where religion is overtly practiced?  I guess if you were gonna pray to God just one time in your whole life, it’d be to bring Mr. Bear back.

DJ discovers that Uncle Jesse’s attempt to replace the broken handle has lead to a complete remodeling of the kitchen.  They do one of those tired ass routines where DJ tries to stall Danny from seeing the kitchen but then he sees it anyway and flips out.
There’s an endless segment where Jesse frantically explains why he fucked up the kitchen and Danny is supposed to be so mad that he can’t speak and, man, anytime they emphasize Danny’s face you just wanna run your fist through it so bad

Stephanie literally pulls a cop into the full house (where from?  I have no idea!) to report that Mr. Bear is missing and for some reason he’s totally willing to help her.  Joey enters the scene and confesses that he probably gave Mr. Bear away by accident and you can see in Stephanie’s eyes that this is the exact moment that she truly realizes what a worthless fuckhead Joey is.

As Stephanie makes search posters for Mr. Bear, DJ tries to console her by recounting the loss of her beloved Pillow People doll.  Stephanie then immediately finds DJ’s doll and of course DJ is elated, which is not as much an entirely predictable gag as it is a blatant product placement for Pillow People.

Jesse unveils the newly redone kitchen.  I guess the producers decided to update the set or something.  Meanwhile, in the living room, Grandma and Grandpa show up with a bunch of new stuffed bears for Stephanie and Michelle lunges for them. 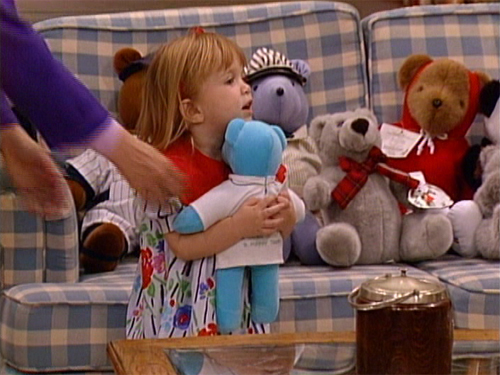 Stephanie refuses any substitutes for Mr. Bear and the whole family all sit around eating chicken and wondering why the fuck she’s so smitten by that stupid fucking stuffed bear.  The family all head up to Stephanie’s room to console her some more, sans Grandma and Grandpa, who apparently had something better to do.  It’s kind of weird how they just sort of force the Grandparents into these brief scenes every few episodes for no real reason.

As the family all stand around and waste their valuable time reminiscing about Mr. Bear, they arrive at the revelation that Mr. Bear was a gift from the kids dead Mom on the day Michelle was born.  The music comes on and DJ talks about how it’s getting harder to remember their mom and Danny reveals for the first time that the cause of her death was a car accident.  I always assumed that she died in childbirth or, more likely, at the sight of the hideous child she’d just unleashed into the world.  It also seemed pretty feasible that she took a good look at the obnoxious bunch of morally self-righteous cornball assholes that she’d come to share her life with and made the very rational decision of doing herself in.  This seems even more probable after everyone shares their memories of her, all of which are about how she would enable or accommodate their stupid bullshit.  Jesse story actually ends with, “she must have really loved me.”  After an endless series of schmaltzy remembrances it is concluded that Pam will never die because she’ll live forever in their self-absorbed memories, and then they all agree to sit together in the living room to watch old home movies of her.

As they watch the home videos we see Pam onscreen for the first time.  I’m still mystified by her having blonde hair, what with her Greek heritage and all, but I guess there needed to be some justification for her and Danny having three blonde daughters, no matter how implausible it was.  Mr. Bear also appears in the video, which prompts Michelle to pull him out of the hiding spot she’d stashed him in.   Remember when she tried to take him earlier, and how excited she got when Grandma brought all those replacement bears over?  Yeah, I know, it’s a pretty obvious and lame outcome, but at least they made an effort to lay groundwork for something this time.  So Stephanie is reunited with Mr. Bear, once again divulging this shows primary life lesson:  everything will be fine as long as everyone gets exactly what they want all the time.  The episode wraps with a long silent pan of the whole family watching the videos, with occasional shots of Pam interspersed.  I kept waiting for her to fall over or get hit in the face with a football but I guess this episode must predate America’s Funniest Home Videos. 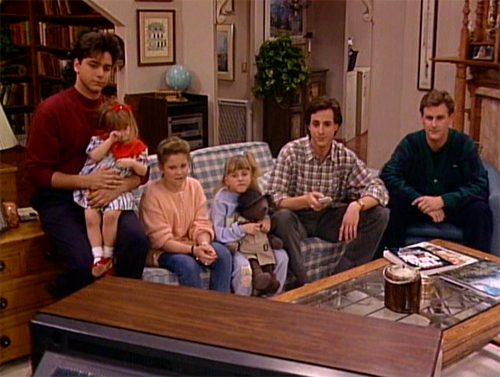