Pre-Credits Gag:  Uncle Jesse makes Michelle show him her tummy and tells her that she’s getting fat.  She then refuses his assistance with putting on her sweater but ends up calling for his help when she gets stuck.  Let that be a lesson to all little girls about how they are fat and can’t do anything without a man’s help. 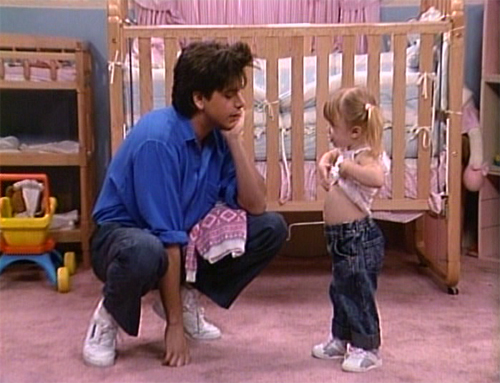 Jesse and Joey dick around in their studio, pretending to work until Danny interrupts them with the news that he’s all excited about doing his taxes.  Do they just go out of their way to make Danny the lamest fucking nerd on Earth or what?  The phone rings and the baby answers it, which is becoming a reoccurring gag on this show, and she tells the person on the other end, “I went poo poo in the potty.”  It turns out that the caller is Patty Fogerty, some chick who used to bang Joey like ten years ago and then dumped him for some guy who was a lot less annoying, like Paulie Shore.  Joey holds the phone while he and Danny have a long argument about whether or not Joey should talk to her and then Danny argues that, “she just ripped out your heart, threw it on the ground and did the Mexican hat dance on it,” and then he does a little Mexican hat dance.  Not only is this painfully nerdy and uncharismatic to watch, but it also continues Danny Tanner’s subtle yet persistent assault on Latino culture.  I mean, damn, Danny Tanner, why’s the dance she does on his heart gotta be Mexican? 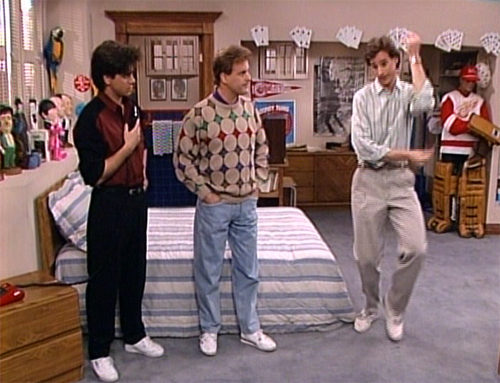 So even though her call was answered by a baby who was talking about shitting and then she was placed on hold for like five minutes while the dad’s argued about whether or not Joey should take the call, Patty Fogerty still wants to see Joey.  Danny, clearly wanting Uncle Joey’s butthole all for himself, gives a final warning, but Joey invites Patty over anyway, giving the full houses address for the first time:  1882 Girard.

Kimmie Gibbler lights up the screen and our hearts by doing a magic show for the Tanner sisters.  She fails to do a trick properly and ends up handcuffing DJ and Stephanie together.  Kimmie heads home to get the keys but not before warning DJ and Stephanie not to tell anyone because the handcuffs belongs to her brother.  If you’re having trouble following the logic there, you’re not alone.  Also, since when does Kimmie Gibbler have a brother?

Uncle Jesse eats fried chicken and points out what a boring spazz Danny is for being so gung ho about doing taxes.  Jesse considers retracting his comments when Danny suggests that he might save thousands of dollars with his advanced methods.

Patty arrives at the full house, greeted by Joey in a suit that he found in an alley behind a gay nightclub.  As Joey and Patty begin reacquainting themselves, Danny continues to give her the stink eye and suggestively perform Mexican hat dances.  For the first time ever, Joey is actually ashamed of someone else and asks Patty if they can talk in his room.

Down in Joey’s room, Patty tells him that she just got divorced and has never really been happy since she and Joey split up.  Say what!??!  She then reminisces about his Popeye impression and reveals that Joey apparently used to be big into streaking.  How unimaginably gross!  There is then a lengthy emotional exchange about what went wrong in their relationship.  Jesus Christ, not only did they just force me to picture Joey naked, next I gotta watch him try to deliver some serious dramatic acting?  Shitty!  We get one final kick in the nuts when the music comes on only 12 minutes into the episode, which I don’t think has ever happened before.  Joey and Patty decide to explore their relationship and then they start kissing until the commercial break comes on.  Well, shit.  That still wasn’t as bad as Uncle Jesse’s Christmas Speech, but it’s certainly up there among the worst scenes ever. 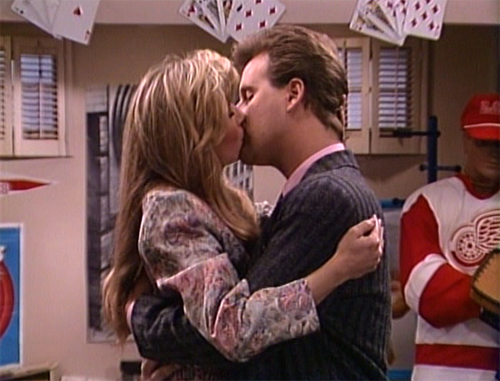 Jesse accepts Danny’s help with his taxes while Danny exposits his concerns about Patty coming back into Joey’s life.  Dang, Danny, why you gotta keep Joey’s butthole all for yourself?

Kimmie Gibbler returns to the full house and breaks the news that her brother will be gone until the morning and she can’t undo the handcuffs until he gets back.  So even though any sane person would tell Kimmie Gibbler to go fuck herself at this point, Stephanie and DJ agree to hide the fact that they’re handcuffed together from Danny.  It seems like just about every episode features some wholly unoriginal sequence where someone is trying to keep Danny from seeing something, whether it’s a horse or new cabinets or handcuffed children who have no real motivation for hiding it from him.  I guess that for whatever reason the people making this show just thought that scenes where people are doing a bad job of keeping secrets from Danny are where it’s at.

In the morning Danny discovers that his method of doing taxes prevented Jesse from getting a refund.  But I thought Danny was all about doing taxes! What a surprising outcome!  Joey enters the front door singing after a long night of getting his rocks off.  Incidentally, where is Cheryl in all of this?  She and Joey have been dating all season.  Did Joey just give her the boot as soon as Patty showed up, or maybe they broke up between episodes?  Or maybe, just maybe, no one who was working on this show gave two shits about continuity.

Kimmie Gibbler comes over in the morning with the news that her brother wont be back for another week but DJ and Stephanie’s vehement reaction outs the whole secret handcuffs plot to the dads.  Jesse does a magic trick that transfers the handcuffs to Kimmie and then everyone ignores her pleas for help.  Take that, Kimmie Gibbler!

Joey and Patty reenact that scene from Lady and the Tramp in the backyard.  Oh, man, I can’t stand it!

As if that’s not excruciating enough, the scene quickly turns dramatic as Joey feels the need to explain to Patty that he’s a mature grown-up now.  The music comes on as Joey and Patty have some bullshit talk about their relationship and I guess Joey decides that they should just be friends or something.  Man, what a waste of time.  Nothing in that story happened for any reason.  Their relationship was completely undeveloped in the first place and then it switched gears in the last two minutes of the episode.  Also, why did Danny have such a big problem with Patty?  He kept describing her as this devil woman but really she had no personality at all.  And who the fuck was asking for a dramatic episode where Joey has a romantic relationship, anyway?  Could there really have been one person on the planet who wanted to see that?

Firsts:  Full House’s Address, Kimmie Gibbler’s brother, Joey is not on the receiving end of shame