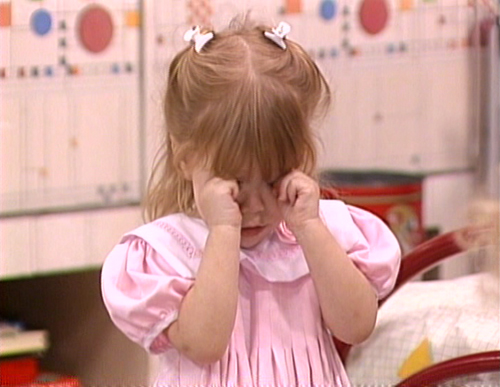 Pre-Credits Gag:  Michelle enters Stephanie’s room and demands a horsey ride.  When Stephanie tells Michelle that she’s too busy to give her a horsey ride, Michelle rips off Stephanie’s old routine of repeatedly denying the other person’s lack of availability and then fake crying.  This is sort of a landmark moment in the series, as it is clearly the exact moment where the producers decided to shove the middle child as far out of the spotlight as possible and give all of her screen time to the baby.  Stephanie may get the middle child treatment from here on out, but at least she’s got it better than Judy from Family Matters… 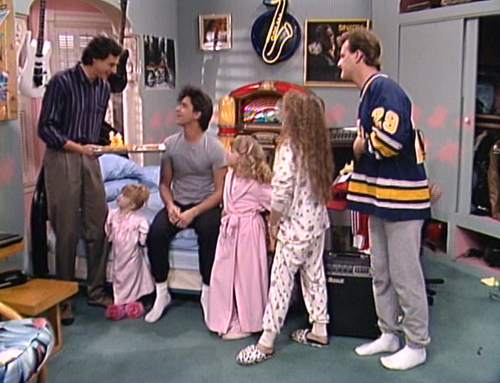 Jesse is woken up on his 26th birthday by his family singing, “Birthday,” which is yet another butchering of a Beatles song on this show.  Incidentally, did you ever notice how the Beatles are dying in the order of how awesome they are?  I bet Ringo outlives Paul by like twenty years.  Anyway, the girls gift Uncle Jesse with a plaque that says, “Worlds Greatest Uncle,” which they give to him right in front of Uncle Joey.  Take that, Uncle Joey, you big piece of shit!  Danny gets Jesse a day-planner, which is lame, and Joey gets him an Elvis watch, which I think is supposed to be a cool gift.  Jesse ruminates on how awesome everything in his life is going and then invites the family to his gig at the Smash Club that evening.  DJ reminds him about her soccer game that afternoon and Jesse says of course he’ll be there because he’s the coach.  Since when is Jesse DJ’s soccer team coach? 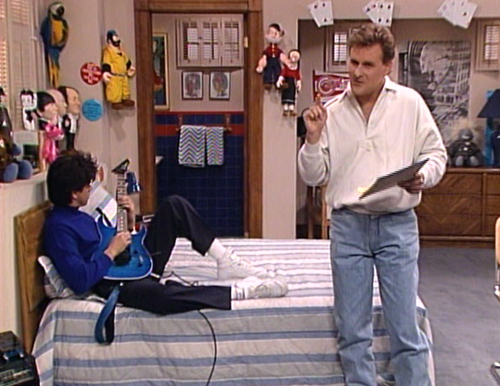 The Uncles fuck around in Joey’s room, “working” on their latest advertising jingle.  Joey comes up with an idea and performs it in sort of a meta-way in that he’s got his back towards Jesse, who he’s supposedly performing for, and is instead directly facing the studio audience.  Danny comes downstairs to pressure Jesse into using his day planner and to share the news that he convinced a big critic from the “San Francisco Mirror,” (which is not a real newspaper and doesn’t even sound like it could be) to come down to the club to watch Jesse’s shitty band perform their terrible music.  Jesse gets all excited and then tries to make time to work with Joey on their jingle and also look at Michelle’s jack-in-the-box with her but then he realizes that he has to go coach DJ’s soccer game. 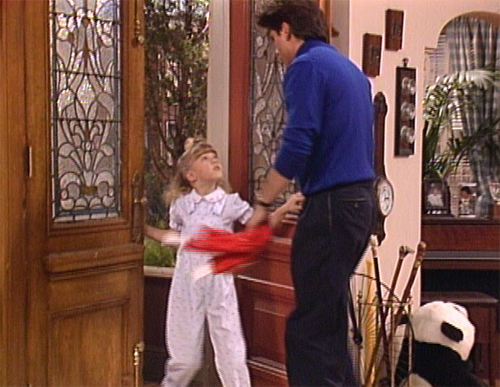 As he’s exiting the front door Stephanie enters from who knows where, which is the second odd bit of staging in as many minutes, and demands that Jesse bake 100 cookies for her school bake sale tomorrow.  Damn, how you gonna demand 100 cookies with no notice?  And on his birthday, too?

Jesse returns to the full house after DJ’s team has won their game and is immediately forced to start baking cookies.  As he puts his humiliating apron on, Rebecca Donaldson comes over and promises him some hot birthday fucking and then starts making out with him in front of the kids.  It’s been a while since there’s been a scene where everyone is staring at Jesse’s while he’s making out.  I guess that’s because he’s settled down and stopped being such a big hoe this season.

So anyway Jesse tells the kids to get ready for his performance at the Smash Club and continues baking while Rebecca Donaldson reminds him that he’d promised to go with her to her Uncle’s First-Wife’s Son-in-Law’s wedding tomorrow.  Jesse tells her, “I’m there for you, babe,” which he’s said to everyone who’s asked him for something the whole episode, and then, as if the theme of Jesse having to help everyone all the time weren’t overwhelmingly apparent enough, Joey and Danny file in as Joey brings up their advertising deadline and Danny requests help with his car, which is just totally out of left field.  Instead of just telling everyone to back up off his nuts for like 2 seconds, Jesse promises everyone to help them but not until after his performance.

So I’m pretty sure that this is the first appearance of the Smash Club, which becomes a frequently used location throughout the series.  I know that they’ve gone to clubs a few times in previous episodes but I’m pretty sure that they never specifically went to the Smash Club before so I’m marking this as it’s first appearance unless some internet nerd can prove me wrong. 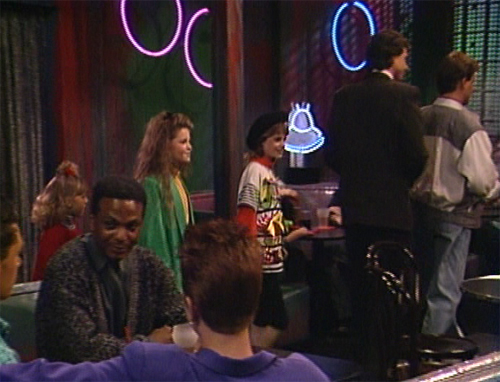 It turns out that Jesse double-booked his band so he’s the only one there.  The family offer to be his backup band and for some completely unknowable reason, Jesse agrees.  Why didn’t he just go up there and play his guitar by himself?  Why would he ever in a million years agree to have his no-talent, attention-starved family back up his performance?

So guess what?  They suck shit.  Also I think now’s as good a time as any to mention that Jesse is wearing a leather jacket with fringe and leather chaps over jeans in this scene.  So, yeah, anyway, not only is the family totally incapable of playing music, but they’re also totally inconsiderate of the fact that this performance is a big opportunity for Jesse and so they start hogging the spotlight by doing solos and telling jokes and shit. 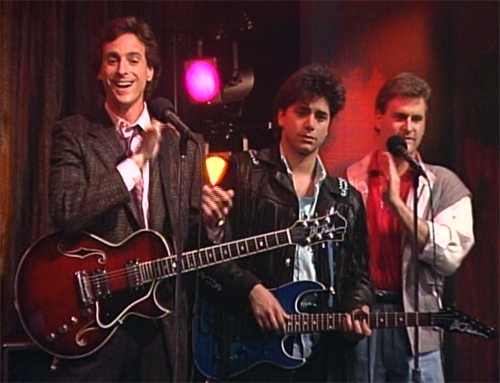 By the end of their performance, after the entire audience has walked out, Jesse is visibly destroyed and yet the family just goes on gleefully singing campfire songs to an empty room. Man, I’ve seen this family act like assholes in so many ways now, but this has gotta be the assholiest move of them all. 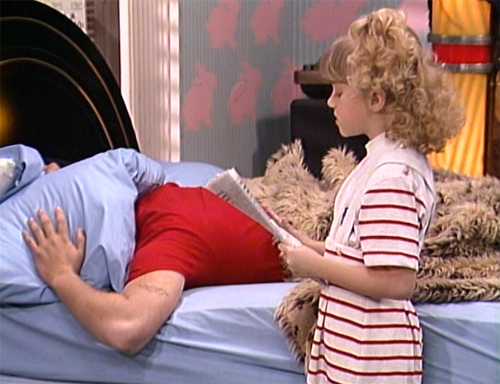 In the morning, Stephanie wakes Jesse up by reading him the scathing review their band got in the newspaper.  The reviewer’s credibility can’t be called into question because the only positive thing he says is about Kimmie Gibbler.  After waking Jesse up with shitty news, Stephanie demands that he bake her those cookies, and then the baby comes in wanting him to play with her jack in the box, DJ has a soccer game, Joey needs help with a jingle and Danny is having car problems.  Everyone just stands around him and bitches about what they need from him all at once with no regard towards Jesse or each other.  Jesus Christ, as if this shit wasn’t bad enough before, the entire family just finished callously destroying Jesse’s dreams of being a musician and instead of processing that for a second they just go on demanding more shit from him.  Finally, Jesse does the first sensible thing that anyone has ever done on this show, which is to have a manic episode and then hide under some blankets.

Jesse awakens from a catatonic stupor to find his family bringing him accommodations for a much needed day of rest.  Danny tells Jesse that he needs to learn to balance his priorities, which is probably just another passive aggressive attempt to get him to use that dumb ass day planner, and then Jesse says he thinks it’s really important to be the world’s greatest uncle.  Man, he really took that piece of shit novelty plaque to heart.  The family reassures him and then they all dogpile on top of him before agreeing to leave him alone.  Everyone leaves Uncle Jesse at peace except for the baby, who still demands that he play with her jack in the box, which is supposed to be a cute ending for some reason. 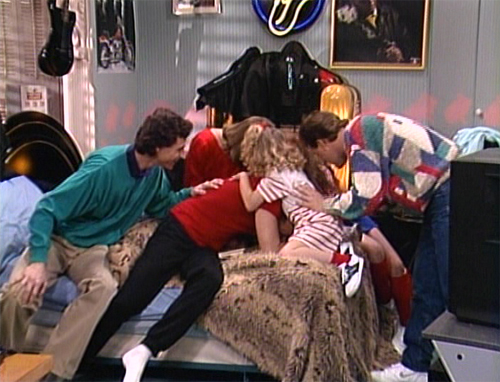 So I guess the final lesson here is that Jesse needs to learn proper time management…  But what about he fact that his family totally ruined his musical performance?  Why is that never addressed?  All of Jesse’s time management problems come from his whole family being up his ass all the time and constantly fucking up everything he does.  It’s just appalling.  But, really, I think the worst thing about this episode is that it’s basically the same exact premise as the two-part episode from last season where Jesse takes off because the family won’t leave him the fuck alone for two minutes.  That was actually episodes 19 and 20 of last season, so the 20th episode of seasons 1 and 2 are virtually the exact same story.  See, the more you know about Full House, the more it totally fucking sucks.