Pre-Credits Gag:  Danny asks Michelle to help him put away the groceries and then she tries to sneak the cookies out of the kitchen by conspicuously stuffing them under her shirt.

This episode starts off on full blast with the return of Rusty, who’s sitting in the kitchen in his baseball uniform while Danny uses a bat to demonstrate how to clean santorum from your penis.  I think Danny’s just trying to give practical, patronly advice but you can tell that Rusty’s pretty aroused by the intense way he’s staring at Danny.

As if that wasn’t a boner-popping enough opener already, Stephanie comes home to show off Brett, the latest hot piece of ass she’s scheming to get with.  Like all secondary Full House characters, Brett is completely defined by a single characteristic (as opposed to the main characters, who can have up to 4 characteristics), which is his love of baseball. 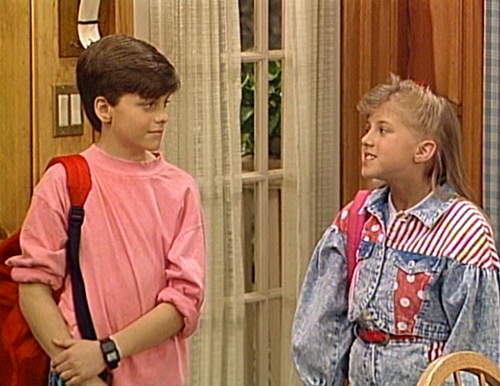 After Brett leaves, Rusty tries to make fun of Stephanie for swingin’ on Brett’s nuts so hard but she’s pretty unashamed.  She starts to wonder how she might trick Brett into becoming her boyfriend and DJ offers up some advice even though it’s been clearly established repeatedly on this show that DJ is a total fucking dud with boys.  Seriously, it’s one of her 4 characteristics.  Anyway, DJ gives classic advice from a teenage girl with no self-esteem, which is that since Brett likes baseball so much she should join the baseball team.

Jesse unveils the new attic apartment to Becky.  How’d they get a piano up there?  Just as Jesse lowers the electric murphy bed for some hot fucking, Michelle walks into their room and demands attention.  Amazingly, the thought of tapping Becky’s sweet, sweet ass on that electric murphy bed is alluring enough for Jesse that he’s actually willing to deny Michelle’s demands for attention.  Holy shit, you guys, that’s like a miracle!  That’s seriously the first time in the history of the show that one of the kids’ demands for attention was not immediately, uncompromisingly met right away.  That just goes to show, once and for all, that pussy is magic.  Even on Full House, pussy is magic, and therefore it is true of all places.

After Michelle gets the straight up boot from the attic apartment, she walks into Joey’s room and tells him that she’s hella pissed.  Honestly, based on everything I’ve seen, I can’t say I’m at all surprised that she would totally flip out when someone actually denied her demands.  For her, trying to understand that everyone’s not just going to do whatever she wants all the time is like trying to get her to adjust to living in the ocean or something.  It’s just totally unfeasible.  Anyway, Joey allows her to interrupt his attempts to do his income tax, which is a pretty silly thing for him to be doing since he’s unemployed and lives in Danny’s house for free.  Honestly, there’s no way Joey’s bringing in more than like 3 grand on an annual basis.  Also, why isn’t anyone else doing their taxes?  He’s not doing them for the house, yet he’s the only one doing them.  Anyway, Michelle’s inquisition into why she’s unwelcome upstairs leads to a series of sexual innuendos, which is something they used to do pretty often in the early episodes but gradually stopped as the series has gotten cornier and more g-rated.

So, for pretty much no reason at all, Joey agrees to go back to the attic with Michelle to give Jesse and Becky a hard time for wanting to have sex in their room.  Man, bringing a little girl into a newly married couples room has gotta be the most legendary cock-block in the history of salty guys who never get laid.  Can this be a new all-time low for Joey?  It’s just so hard to tell anymore. 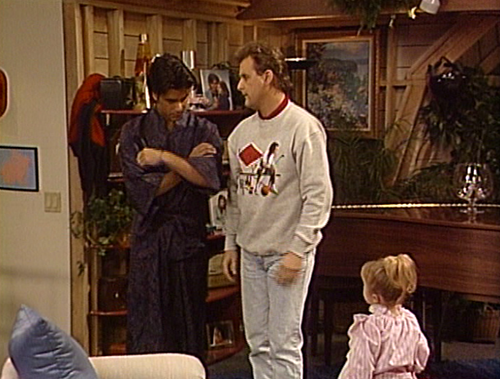 So, even though Jesse’s standing there in a silk bathrobe with his boner poking out, Joey just totally rails on him for not hanging out with Michelle whenever she wants.  I was really hoping that Jesse would fly into a boner-rage from his constantly interrupted lust and beat Joey to death, but you know what?  I’ve wished for Joey to get hurt or die so many times now, and it just never happens.  I don’t know, you guys, I’m starting to think that dreams don’t come true after all.

Anyway, Becky explains that they don’t want some ugly kid hanging out in their room when they’re gettin’ it on so she needs to back the fuck off when they say so, but they’ll make a designated time for her to hang out with them each day so she won’t be such a needy pain in the ass.  It’s nice to know that even though Becky forsook her mental well-being to move into the full house and be married to Jesse, she can still offer up a reasonable solution to a problem every now and again.

Ok, so, just because why not, Danny is the coach of Rusty’s little league team, the Giants, which Stephanie wants to try out for so she can have more in common with Brett.  Danny has her throw the ball to him 2 whole times in the backyard before deciding that she’s totally amazing and should pitch for the team.

At breakfast Danny mentions that he’s gonna let Michelle be the bat boy at the game and then she comes down in a full on batman costume.  Is that weirder than those times she got a wig from out of nowhere?

Brett comes over to talk to Stephanie and she totally drools all over him but then for some reason he says he’s into her and that he wants to be her boyfriend.  And just like that, Stephanie finds herself a new man!  Hey, that reminds me, whatever happened to her old boyfriend, Harry?  That kid was rad.  He just disappeared, never to be mentioned again.  Did he die?

Anyway, as Brett’s leaving the full house he mentions that he’s pretty intimidated by the legends he’s heard about those 2 pitches Stephanie threw in the backyard and that he’s gonna be humiliated in front of his family if he loses the game their upcoming game.  Just when I started to get a sense that maybe Brett was up to something here, he straight up asks Stephanie to throw him some easy pitches so he can win the game because they’re boyfriend and girlfriend now.  Damn, Brett, I thought your love was for real. 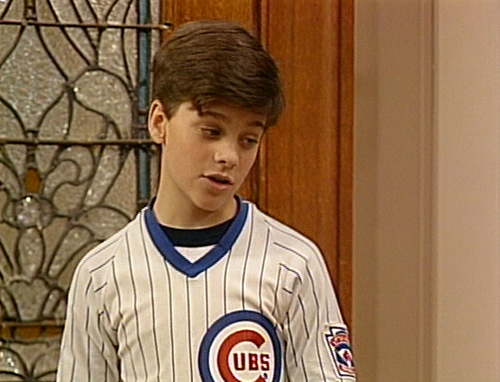 Stephanie strikes a bunch of kids out on Brett’s team, the Cubs, in-between frequent shots of the various full house occupants who are all hanging around the game, including Joey who’s the announcer for some reason.  Who ever even heard of a little league game having an announcer?  What, is he supposed to be doing a radio broadcast or something?  My guess is that Danny just gave Joey a table and a broken microphone to keep him busy so he wouldn’t just sit around the full house by himself and eat all the waffles while everyone else was at the game.

Eventually Brett goes up to the bat and there are a bunch more quick reaction shots, including a really great one of Brett’s Dad, who shouts, “come on, Brett, don’t let me down!”  You can tell it means so much to him! 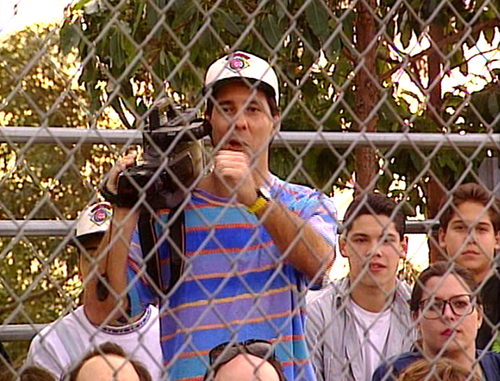 Stephanie, understanding that she really doesn’t have anything else to offer in a relationship, throws an easy pitch to Brett, who scores a home run.  After a time lapse, we get to see Stephanie at the bat as she scores a hit but is tagged out at first.  At the sight of this, Jesse becomes all belligerent, runs onto the field and starts yelling into the umpire’s face.  Jesus Christ, you can’t invite these fucking people anywhere.  Imagine if you were some other kids dad and you went to one of these events that the Tanner family attended.  You’d be like, “can’t my kid just present his science project or whatever without Danny being the judge and Stephanie giving a big speech about not cheating or something in front of everyone and Joey rubbing up against all the single mothers?”  Every time they showed up to anything, you’d be so pissed.

Anyway, they cut to the final moments of the game and I totally didn’t see this coming but Brett’s up to bat again as Stephanie pitches.  Amping up the tension, there’s another shot of Brett’s dad, who says, “come on, son!  It’s all up to you!” 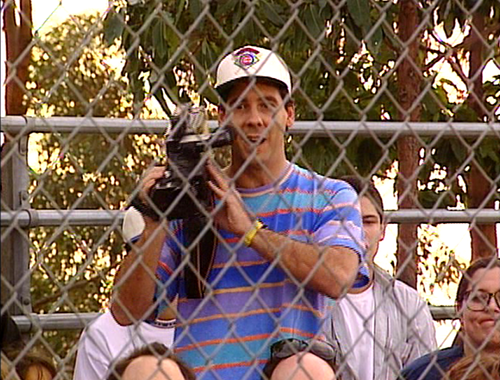 I kept expecting there to be Brett’s elderly Grandfather or his little brother who had cancer sitting there next to his dad to raise the stakes, or maybe a sense that Brett’s dad was gonna beat him if he didn’t win, but the story of Brett’s dad is a simple one.  He has a camera, and he wants his son to win.

Stephanie throws 2 strikes to Brett and then he gives her a look like, “damn, girl, I thought it was you and me,” which leads Stephanie to call a time-out.  Danny asks her whats up and she says she needs to talk to DJ because, “it’s a woman thing,” which leads Danny to believe that it’s about periods so he calls DJ right over.  So then DJ comes over and gives Stephanie counseling about boys while a whole bunch of other kids’ families sit in the bleachers wishing that they didn’t live in the same school district as the fucking Tanner family.

DJ tells Stephanie that she has to choose between true love or self-respect to decide if she’s gonna strike out Brett and then there are a bunch more shots of all the characters, including another one of Brett’s dad, who takes his hat off with anticipation.

Stephanie strikes Brett out and there are a lot of enthusiastic reaction shots.  I was hoping we’d get to see Brett’s dads’ reaction, but I guess the folks in the editing room decided to leave us wantin’ more.  Anyway, Stephanie is praised by her teammates but she sees Brett looking all sad and feels shitty.

Later, Stephanie sits in the backyard of the full house and expresses her woes to Comet.  Brett walks up to her and congratulates her on her victory and she asks if he’s pissed at her.  Brett explains that he realized that asking her to throw the game was a shithead thing to do and, besides, if he wanted to win so bad he wouldn’t have played for the Cubs, then they go inside for a nooner.

The moral of the story is: pussy is magic.

Firsts:  The attic apartment (completed), one of the kids is denied attention, Brett