Season 5, Episode 18, “Too Much Monkey Business” 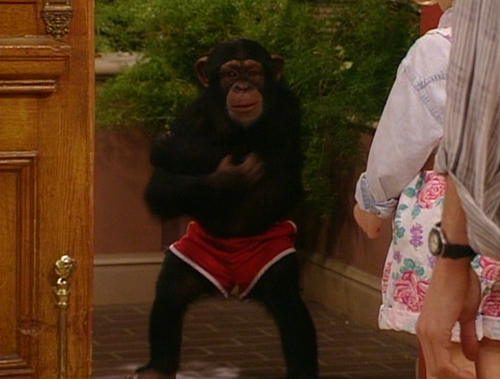 Michelle answers the door to find a goddamn monkey standing there!  At first I thought it might have been a large mirror, but, no, it’s an actual monkey!  So what the fuck’s a monkey doing at the full house?  Well, Danny’s sister, Wendy, who we’ve never heard of before, is in town visiting and one of her few characteristics is that she has a pet monkey.  The girls are all reacquainted with their estranged aunt and introduced to Ginger, the monkey.

Michelle asks Ginger if she can do a monkey face and then tries to do one herself.  Bitch, every face you make’s a monkey face!

Jesse and Becky come into the living room to say hello to Wendy and then Ginger immediately reaches into Jesse’s pocket and starts giving him a hand job.

Joey enters the living room and promptly engages Wendy in some juvenile teasing.  Danny tells them to fucking quit it with that bullshit, then he asks Joey to drive Wendy to a job interview at the zoo.  Meanwhile, Ginger continues to grope and caress Jesse.

Stephanie opens a package that arrived at the house for “Tanner” and finds an African statue inside with a note that says that if it isn’t fed it will curse the house.  Suddenly, DJ and Kimmie Gibbler enter the room and say that they’re going to be in the bathroom doing beauty makeovers for the next 3 hours, then they leave as quickly as they came in.  Stephanie and Michelle continue to investigate the statue and then its eyes light up and it says, “feed me,” which frightens them. 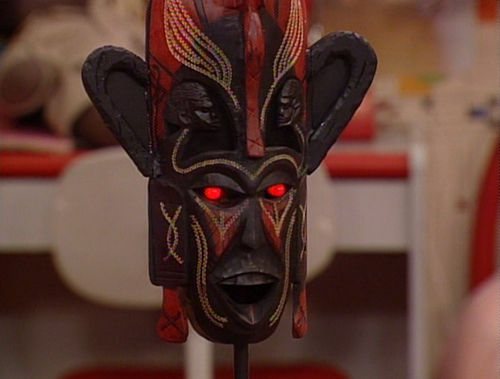 Joey and Wendy return to the full house with Ginger, who continues to grope Jesse and put her mouth on him.  Joey and Wendy are left alone and there’s this really unpleasant scene where we’re supposed to believe that there is romantic chemistry brewing between them.  One of the ways he gets her all worked up is by doing an impression of the Tasmanian Devil.  That’s how Joey spits game, you guys.  And the worst part is that it works.

Danny walks in on his sister and his worthless best friend making out on his coffee table and he’s a little taken aback.  Joey thanks Danny for getting the two of them together in this real sly, “thanks, bro” kind of a way that’s really upsetting.  Anytime Joey is acknowledged as any sort of sexual being it really makes me feel upset. Danny tells Wendy to go take a nap up in his room and then when he gets Joey alone he’s like, “back the fuck up off my sister.”

Joey actually tells Danny that he’s gonna fuck his sister whether he likes it or not, which is astonishingly aggressive behavior for him.  It’s like he grew a dick all of a sudden, after years and years and years of not having a dick, or balls.  He tells Danny that he has no right to tell him who he can or cannot date, which I think might be a little debatable since he’s just some loser that lives in Danny’s house for free.  Hey, wait a minute, I just realized something.  Joey’s the host of a children’s show now, so he must be making plenty of money.  So why the fuck does he still live in the full house?  It made sense for all those years when he was an unemployed stand-up comedian, but he has an actual career now, plus the girls are older, and it’s not like he’s helping Jesse and Becky with their kids.  Seriously, what is that guy doing still living there?  What the fuck is this show even about anymore?

Anyway, the monkey runs loose in the house while Joey and Danny look for her and argue.  DJ and Kimmie Gibbler are visited by the monkey, who starts messing with Kimmie Gibbler’s hair dye just as DJ explains how careful she was when she mixed it.

Jesse gives his ten millionth demonstration of what a terrible husband and father he is by falling asleep while holding one of his babies.

Becky wakes him up and puts the baby down and then Jesse starts grabbing on her and saying that he wants to fuck.  Seriously, I don’t know if there’s ever been such an overt allusion to sex on this show before, and it’s a little unsettling.  What’s up with this episode?  It’s like everyone’s all jacked up on testosterone or something.

Oh, I get it!  It was a set-up!  Jesse gets in bed and then lies motionless on his side with his eyes closed, which is how all men present themselves when they want some sex, and then the monkey crawls into bed with him.  Naturally, Jesse never opens his eyes or turns around, and he can’t tell the difference between his wife’s touch and a monkey’s. Instead he is lovingly fondled and even spanked by a monkey for several minutes while Becky watches.

I have to say that this scene is so fucking over-the-top ridiculous that it’s almost kind of enjoyable.  You can tell that John Stamos knows that this is the most deliberate, nonsensical premise for a scene ever, and it makes it less painful to watch than most of the terrible moments on this shitty show.  Even still, what the fuck am I watching, you guys?  What am I doing with my life?

Kimmie Gibbler’s hair comes out all fucked up but then she likes it.

Meanwhile, Stephanie and Michelle offer an incredible assortment of foods to the African mask. 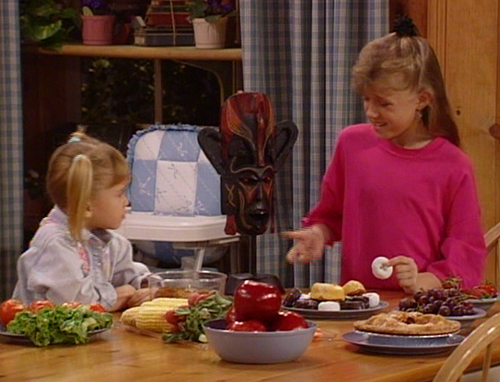 Seriously, where’d they get all that stuff?  Wendy approaches the scene and tells the girls that the statue is a tacky souvenir she bought that’s actually an electronic bank.  Stephanie is pretty pissed off that she went through all of that anguish to try to keep the statue from cursing the house but that’s what she fucking gets for opening other people’s mail.  Why the fuck would Aunt Wendy mail that thing to herself anyway? 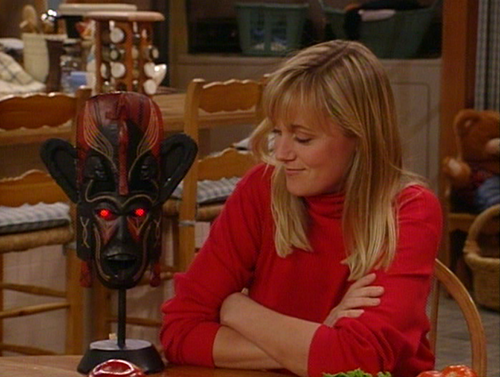 Joey and Danny follow the monkey out onto the tree outside of Stephanie’s window and then they have a heart-to-heart talk.  Gentle music plays as Danny explains that his sister’s pretty flaky and since Joey’s emotionally like 6 years old he’s probably going to get hurt.  Joey thanks Danny for his insights but maintains that he really wants to fuck his sister seriously super bad, so he’s gonna do it no matter what the consequences are.

Later, Wendy tells Joey and Danny that she’s going to take that job in town so she can be closer to Joey, because what reason is there for a woman to exist around the full house if she’s not banging one of the dads?

Jesse comes into the room in a robe because he just finished banging his wife and then the Monkey touches him some more and that’s the end.  So, wait, is Danny’s sister ever going to be on the show again?  I certainly don’t remember ever seeing her.  Finally, and in conclusion, I will say that even knowing what I know from watching so many shitty episodes of this terrible show, I still can’t believe they had an episode about a monkey running loose in the house.

65 Responses to Season 5, Episode 18, “Too Much Monkey Business”