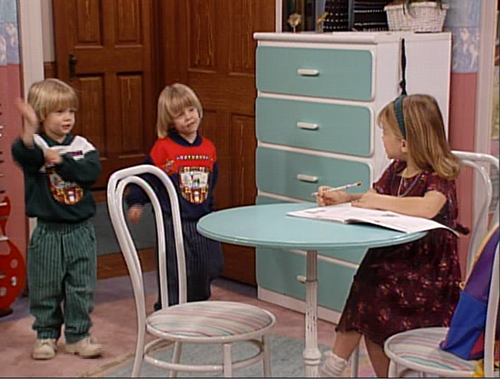 Pre-Credits Gag:  The twins run into Michelle’s room and tell her a shitty joke.  That’s it.  That’s all that happens. 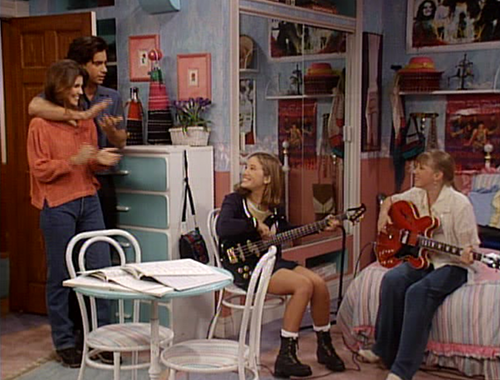 Stephanie and Gia practice the guitar and bass and then Jesse and Becky come in and applaud them.  The girls say that they’re thinking of starting a band and the thought of his niece growing up to follow in his footsteps by becoming a talentless piece of shit musician thrills Uncle Jesse to no end.  Becky tells them that if they’re serious then they should consider entering the Wake Up, San Francisco young talent search, because they can’t just be in a band and rehearse and stuff, you know?  There has to be some sort of climactic event and it should really involve Wake Up, San Francisco.  The girls decide that they need a keyboard player and drummer to round things out and then they enlist Jesse as their manager.

The girls think about who to enlist for their band and Gia suggests some girl that’s never been seen or mentioned before as the drummer and Stephanie says that she’d be perfect because she has no life.  They ponder over who their keyboard player could be, which is an essential addition to any band, and Jesse reluctantly suggests Kimmie Gibbler.

Once Kimmie Gibbler and some girl with no discernible characteristics are enlisted to the band, they start to jam out and Jesse is dismayed by how hard they suck. 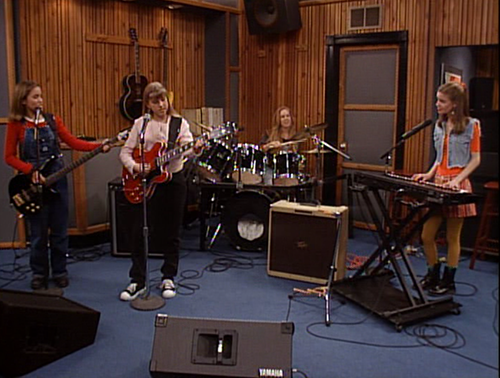 Joey and Danny check in with DJ and discover that she’s been following the stock market for an economics project and would be making a shitload of money if she’d been playing it for real.  Joey decides that he wants to make real investments in the stocks that DJ’s been following and convinces Danny to do the same.

Stephanie and her band perform (and by perform I mean unconvincingly lip-synch) that timeless Ace of Base classic, “I Saw the Sign.”  Even though their terrible cover was on par with any of the terrible covers that Jesse has performed over the years, he insists that they need to rehearse a lot more before the talent competition.  They refer to him as “uncle slave driver” and duck out to the mall to pick out outfits for their performance.

When the girls come back from the mall, all they’re interested in is looking at themselves in the mirror in order to plan their visual presentation for their performance.  Michelle comes in and offers up her little gay friends Derek and Lisa as the singers for their band but the girls all just laugh at them.

Jesse comes in and tells the girls that they need to rehearse more but they’re all just like, “fuck that shit.”  Jesse, behaving responsibly and employing a work ethic for the first time in his entire life, continues to push them to practice, which leads to him and Stephanie having quite the argument.  Stephanie finally tells him that they don’t need him as their manager and Gia and Kimmie Gibbler agree while the blonde drummer girl just kind of stands there, having no lines and no character to work with.  I guess that having no life really is her defining characteristic.  Jesse walks out and then Stephanie looks wistfully towards the door while sad music plays.  The weirdest part is that the other girls immediately go back to posing purposefully in the background, which would seem odd even if it wasn’t in contrast to Stephanie’s heavy handed dramatic moment. 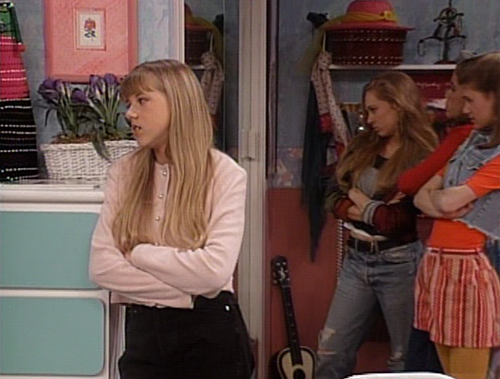 Danny and Joey check on their stock and discover that it’s way down.  DJ comes in to check on it, too, and I wish I’d invested in that outfit that she’s wearing.  I’d be a muthafuckin millionaire!

Stephanie’s band set up for the talent show at the Smash Club because WHERE ELSE ON EARTH COULD IT HAVE POSSIBLY TAKEN PLACE!??!  Jesse asks Stephanie if she and her band have been rehearsing and she tells him that they’ve put all their time and energy into their hair and makeup and all that shit.  Kimmie Gibbler gets Danny and Joey to carry her fancy new keyboard into the club for her and then DJ asks her how she was able to afford it.  She says that she invested in the stocks that DJ had been following, which have gone way up since the previous scene.  Danny hears this and starts doing a really bizarre jig that words cannot describe until Joey tells him that he sold their stocks earlier in the day when they were at an all-time low.  I don’t even know anything about stocks, but I do know that you don’t sell them when they’re at an all-time low.  But I also know that getting involved with Joey in any sort of manner whatsoever is going to fuck up your shit, so I guess it’s just Danny’s own fault for not realizing that himself.  How long has this guy been ruining his life for?  If he hasn’t figured this out by now then you shouldn’t waste your energy feeling sorry for him.

Danny and Becky introduce the talent show and then they loom over the first contestant, who’s a tiny little girl, until she finally tells them to fuck off.  Seriously, though, why were they just gonna stand around her on the stage like that?  It’s creepy.  Anyway, her violin playing is pretty crappy. 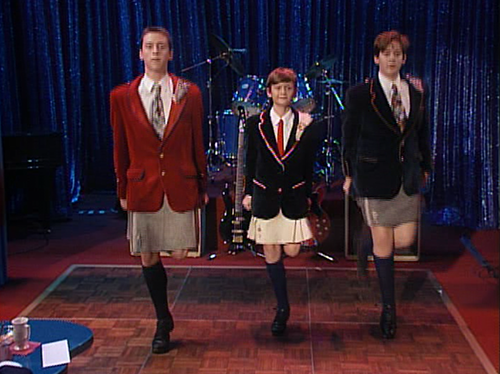 What follows is a montage of performances by kids, many of whom seem to be fairly stereotypical representations of specific cultures for some reason.  There’s, like, Riverdancing and shit.  Eventually it’s Derek and Lisa’s turn to perform, which is the representation of gay culture.

If you don’t believe me, they straight up sing “Don’t Go Breakin’ My Heart.”  Seriously, this show just can’t get enough of pointing out how gay this kid Derek is.  I know that I talk about it a lot, but they just wont stop baiting me, constantly.  This performance makes the video that Elton John made with RuPaul for this song in the 90’s look like an episode of Baywatch, it’s so goldarn homosexual. 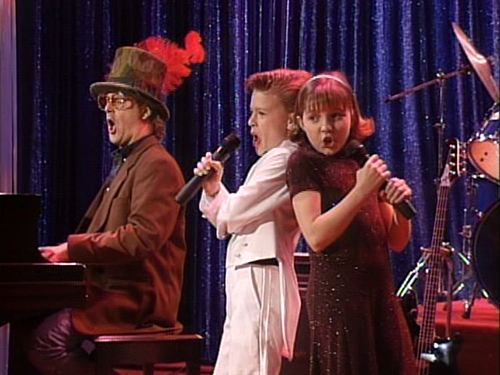 The kids are pretty decent performers.  They’re not great or anything, but all of the cultural stereotypes that preceded them were pretty lackluster.  The only thing that really sucks about the performance is that Joey is on the piano.  These kids are young enough that there’s still hope for them to learn that valuable lesson that Danny never will.  Never include Joey in anything.

The weirdest thing about the performance is this one shot of the audience’s reaction.  They look mildly dazed and uninterested, and one old guy is half-heartedly clapping along.  Why would they show us that? 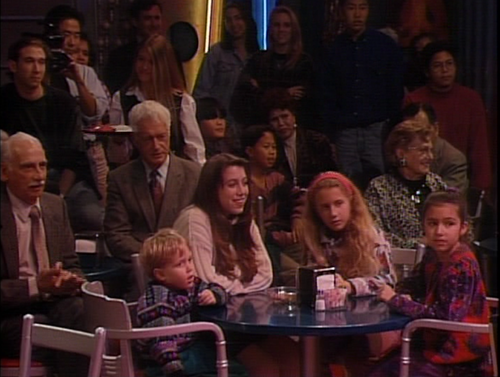 After Derek and Lisa’s performance, Danny introduces the final act, Girl Talk.  That’s actually a pretty cool name for a band.  That might be the only neat idea ever in the entire series.

The performance starts off pretty well and the audience seems way more excited about it than they were about the last act, but then things go to shit pretty quickly.  Stephanie knocks her mic stand over and the band is completely unable to recover despite the fact that they’re obviously lip-synching.  They stop the performance and begin bickering with each other about whose fault it is.  Well, everyone but the drummer does.  She doesn’t care about anything.  The weirdest part about the bickering is that they’re right in front of the microphone, so everything they’re saying should be amplified into the audience.  Anyway, they try to start the performance back up but they realize that they’re butchering a beloved Ace of Base song so they run off stage.

Becky and Danny announce that the winners of the talent show are Lisa and Derek, because it’s not like some extra was gonna win it.

They come out and collect their trophy and say that they owe everything to their manager, Michelle, because they had to figure out some way to make this all about her, didn’t they?

Jesse goes backstage to have a very special talk with Stephanie.  She accuses him of coming back there to gloat about how shitty she was but then he starts sensually petting her hair and gets her to admit that she’s really mad at herself. 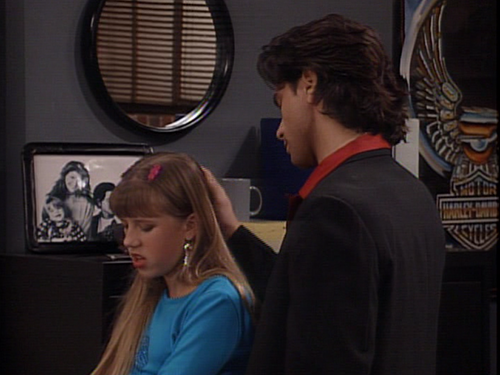 The music comes on as he admits that he was hard on her when he was her manager, but he only did it to try to prevent the horrible public humiliation that she just went through.  He goes on to tell her an amusing anecdote about how he endured a similar experience the first time that he performed in public because he spent so much time greasing up his hair that he was too greasy to hold his drumsticks.  I have trouble believing that this was the only time such an incident occurred.  Anyway, Jesse tells Stephanie that you can’t succeed at anything in life without working very hard, which is a good point, but also one that contradicts pretty much everything that’s happened career-wise to any of the dads in the full house throughout the entire series, especially Jesse.  He’s actually telling her all of this while sitting inside a club that somebody gave him, and not even for a good reason.  Anyway, it’s been 22 minutes, so they hug and that’s it.

I do think it’s worth mentioning that Stephanie’s band was only formed like a week before the competition so, all things considered, I’d say they do a pretty ok job.  I mean, they weren’t presentable, but what band is after a week?

Also, there’s an official Facebook event invite up for the San Francisco Full House Reviewed Close-out event at the El Rio on December 21.  Be sure to RSVP, y’all!  See you in a few weeks!  I’m also wrapping up the planning for the final event in Portland, OR.  It’s looking like it’ll be on January 24… More on that next week!