Danny prepares his acceptance speech for some unnamed awards show for which Wake Up, San Francisco has a nomination.  Becky tells him not to bother with preparing a speech because they always lose to Up and At ‘Em, Oakland.  That’s right, bitches, OAKLAND REPRESENT!  Even though that’s not a real show, I still gots to represent Oakland.  Muthafuckas step to Oakland get stabbed, son.  That’s all I gots to say.

What the fuck was I talking about?  Oh, yeah, so apparently Joey is also nominated for an award at the show because if rambling ass Danny can get nominated for one then so can any worthless asshole who sucks at hosting a show.

DJ comes home with Kimmie Gibbler and Danny immediately starts giving her a bunch of shit about being home late.  DJ quickly deflects his lectures by telling him that the hottest band in school are about to come over to record in Jesse’s basement studio so he’d better not pull some lame dad shit and embarrass her. 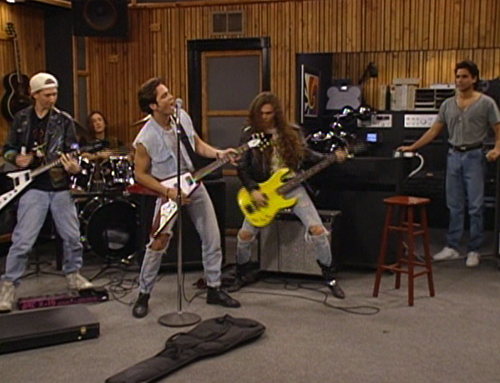 After an amazing display of talent from The Funky Tongues, Jesse provides them with their very first demo tape.  Jesse tries to prepare them for the long, hard road he’s traveling himself by telling them that having a demo tape will not necessarily get you a recording contract but then Pete tells him that they’re just in it for the pussy anyway.  Moments later, Pete asks DJ out on a date, which she nervously accepts.

Just before leaving for the awards ceremony, Becky finds out that Aunt Ida wont be able to watch the boring ass babies that evening.  Stephanie volunteers to babysit them but is told that she’s too young, and Becky and Jesse eventually end up hiring Kimmie Gibbler. 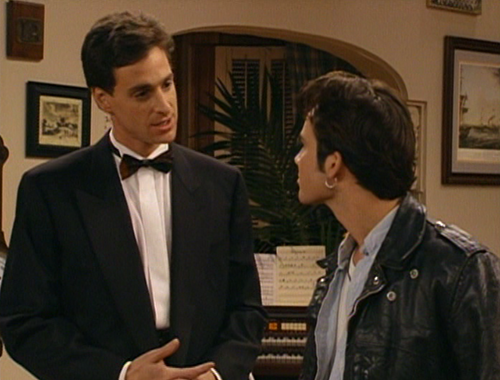 DJ tries to discreetly step out for her date but Danny intervenes and subjects Pete to a barrage of invasive questions.  Danny eventually lets them go but then regrets it immediately after both Jesse and Kimmie Gibbler confirm that Pete is a big ol’ pussy hound.  Boy howdy does that guy love pussy!  Kimmie Gibbler also reveals that Pete took DJ to the drive-in movie theater, which everyone knows is a hot-bed of finger banging.

As the dads all stand around in their suits, wondering what to do, I can’t help but feel for some reason that they should be tossing a football to each other.  Anyway, they all decide to forgo the awards ceremony so they can ruin DJ’s one chance to get busy.  Oh yeah, there’s also a bit where Joey’s suit came with 2 left shoes for some reason so he keeps walking in circles.

Kimmie Gibbler is too lazy and negligent to feed the babies so she hires Stephanie to do it for her.

After accidentally breaking up an elderly couples make-out party in a van, the dads continue to work their way through the drive-in parking lot in search of DJ.  Meanwhile, in Pete’s van, he is eventually able to coax her into going into the back with him.  I was pretty surprised by DJ’s obliging attitude but then after they make out for about 5 seconds she whips out the ol’ frigidity that I was expecting.  Pete is surprisingly cool about DJ totally blue balling him and leaves to go get snacks and probably jerk off in the bathroom.

After Pete leaves, DJ pulls back the curtains between the back and the front seat and finds the dads all sitting up front.  She is totally horrified by their presence and begs them to leave before Pete gets back because they’re humiliating on so many levels.  Pete comes back about 2 seconds later and, upon seeing the dads, realizes that there’s no way he’s even gonna get a hand-job on this date so he tells DJ to go home with her lame ass dads.

Meanwhile, back at the full house, Kimmie Gibbler agrees to pay Stephanie for changing the babies’ diapers.  Michelle is left alone with the dog in the kitchen and she eats one of the dogs treats.

Becky comes home and pays Kimmie Gibbler for babysitting but then she has to give up all the money she made to Stephanie.

DJ totally flips out and yells at the dads, which is kind of awesome.  They all feel guilty and apologize but then they all remember all the information DJ withheld about where she was going and whether or not there would be finger banging there.  The music comes on as the importance of providing vital information about dates is discussed. 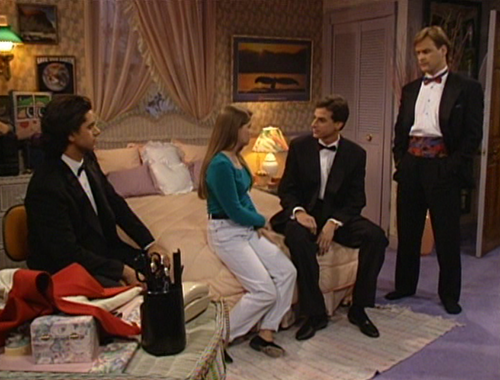 Becky enters the room and tells Joey that he won the whatever-awards-show-it-was award for best children’s program.  What an unbelievable conclusion.  The only award Joey could ever plausibly win is cracker most needing to get stabbed.  I better never see his bitch ass in Oakland.