Pre-Credits Gag:  Jesse shows the twins how to make BBQ sauce and then they pour a bunch of stuff into it while he isn’t looking so it tastes like shit.  It’s weird how malevolent the twins are turning out to be.  They always look like they don’t know what’s going on but then they constantly fuck shit up the second anyone lets their guard down.  I guess it’s not that weird, actually, given the history of behavior in the full house.  Hey, that just made me notice that Michelle’s not in this pre-credits gag.  I guess that makes it the best one ever.

As Michelle and Denise enjoy an episode of Rigby the Rhino, who’s a pretty obvious analogue for Barney the Dinosaur (bringing together the two worst pop-culture creations of the 90’s), they are enthralled by an ad for the Action Rigby action figure.  They both eagerly anticipate the arrival of their figurines in the mail because you have to send away for this piece of merchandise instead of buying it at the store for some reason.  Both girls are planning on seeing Rigby’s guest appearance at the mall later in the day and hope that the figurines arrive beforehand.

Joey had plans to see The Phantom of the Opera with Danny and Jesse and their ladyfriends but his date cancelled (they didn’t even bother introducing us to this love interest before never mentioning her again) so he gives his tickets to DJ and Steve.  DJ decides that she wants to get her hair did before the show so Jesse recommends his hairstylist, Alejandro.  DJ ends up going to Kimmie Gibbler’s hairstylist instead and comes home looking all fucked up. 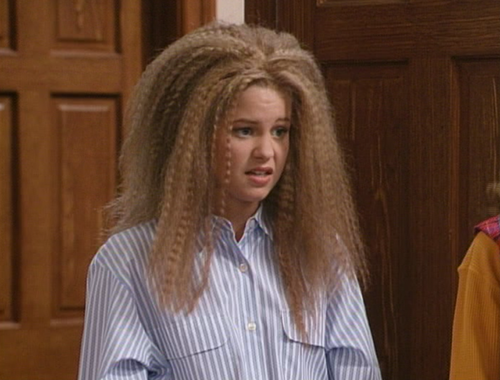 Michelle’s Action Rigby action figure arrives in the mail and she’s nonplussed by how much smaller it is than she expected.  She also seems to have thought that it would have the capability to act on its own accord, which makes her disappointment pretty hard to empathize with.

When Steve comes over, DJ shows him her fucked-up ass hairdo and he tries to pretend that he likes it.  She acknowledges how bad it looks so he admits that he thinks that it looks like shit, too, and then she scolds him for having initially presented a false opinion.  After Becky and Vicky take DJ upstairs to try to fix her hair, Jesse and Danny take Steve aside to school him about talking to women.  Even though it’s been presented to us without variation over the last 6 Seasons that Danny and Jesse know absolutely nothing about women, their advice, which is to compliment women all the time, even when they look crappy, isn’t really all that bad.  I mean, it’s not great advice or anything, it’s just not as bad as I expected it to be.  I figured that these two assholes women advice would be all about how to get them to let you put it in their butt, or how to get them to pay your rent or something.

Stephanie and Michelle complain to Joey about how crappy the Action Rigby is and he says that everyone gets ripped off sometimes, then he shows them a ventriloquist dummy he sent away for when he was a kid that didn’t even have a moving mouth.  If it’s so shitty then why does he still have it?  Just in case some ugly kids asked him about it 30 years later?

They decide to call the phone number in the catalog to register a complaint but all they get is a pre-recorded pep-talk about how the figure’s not so bad.  Denise comes over and says that she’s hella pissed about her tiny-ass Rigby figure, too, and then Joey gets all riled up and says that they’re gonna gather all of their friends who feel ripped off to see Rigby at the mall.  Then he huddles with the kids and starts telling them what the plan is as the commercial break music comes on, which makes no sense.  He’s like, “alright, here’s what we’re going to do.  We’re going to go to the mall…” and then the vocals fade out as he continues to explain the plan while the music sets in.  But that’s literally the whole plan, and he already said that they were going to do that.  What else was he supposed to be saying after the audio faded out?  I don’t know why but that kind of stuff always really bugs me.  One thing I hate even more is when they do that fake inaudible whispering on shows.  You know, like, “here’s what we’re gonna do.  First we’re gonna haspuss pss pss pss…”  That shit drives me nuts.

A bunch of kids with no rhythm writhe in their chairs as Rigby performs at the mall. There aren’t even that many kids there.  Anyway, Joey, Michelle and Denise lead their gang of dissatisfied kids and they all start protesting Rigby, who immediately stops his performance and asks them what the problem is.

The weirdest thing about this scenario is that it’s not like Rigby is a real guy.  I mean, even if there was one actor who always portrayed Rigby, it’s doubtful that he’d be the one who made these shitty mall appearances.  And even if he was, it’s not like he’d be responsible for the quality of his merchandise.  Anyway, Michelle tells Rigby that the Action Rigby is a worthless piece of shit and then she gets all of the kids to start chanting, “Rigby is a rip-off!” and the rest of the crowd joins in.  Rigby makes a dash for the exit and the angry mob tries to follow him but some d-list actor who’s doing an incredibly sad rendition of Barney Fife cuts them off.

As Becky and Vicky fix DJ’s hair, they try to school her about men in the same way that Danny and Jesse are schooling Steve about women.  According to them, men are all a bunch of shitty liars who always just tell you what you want to hear so you wont get mad at them.  To prove it, they decide to look shitty on purpose to see how the men react.

Becky comes downstairs in a nice outfit while wearing sneakers and Jesse totally blows smoke up her ass.  Vicky shows off some earrings with big dangly seashells on them and Danny, totally unable to realize the obvious set-up, says that he thinks they’re great.  Finally, DJ comes down with makeup smeared all over her face and Steve is unable to tell her that he likes it.  He breaks down and tells her that she looks like a whorish clown and DJ is thrilled by his honesty.

DJ explains that it was all a big set-up and everyone learns a valuable lesson about the differences between men and women.  Actually, I guess we learned that men and women are pretty much the same, because they’re both devious and full of shit. 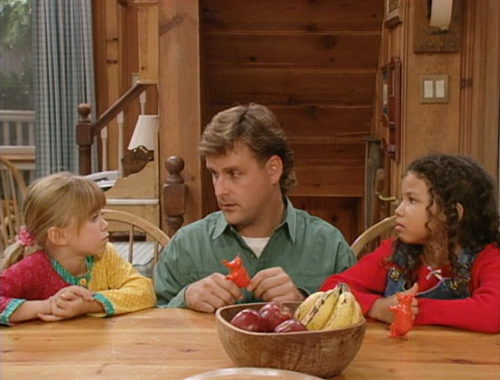 Joey explains to Michelle and Denise that they did the right thing.  They feel discouraged even though they actually upended the public appearance of a beloved television star, which is a pretty remarkable thing to do.  The music comes on as Joey explains that it’s good to fight against wrongful institutions and they made a big difference by taking a stand.  That’s a surprisingly liberal message.  Actually, maybe it’s conservative propaganda.  Think about it:  back in the 60’s, America invaded Vietnam and the population gathered together in massive protests.  40 years later, the U.S. invaded Iraq and nobody did shit.  You know why?  Probably because of this stupid episode of Full House and its contrived message about taking a stand.  I’m willing to bet that this episode single-handedly ruined organized protest for an entire generation.

The doorbell rings and, since this show’s never willing to let anyone learn a lesson without being copiously rewarded afterwards, it’s Rigby the Rhino, making a personal appearance at the full house.  Everyone treats Rigby like he’s a real asshole but then he gives the girls each a plush Rigby doll and tells them that every single kid who ordered an Action Rigby will also receive one.  Apparently Rigby was so affected by Michelle’s protest that he was able to swiftly manufacture these plush dolls and decided to lose millions of dollars by sending them out to all the kids who bought his crappy action figure. 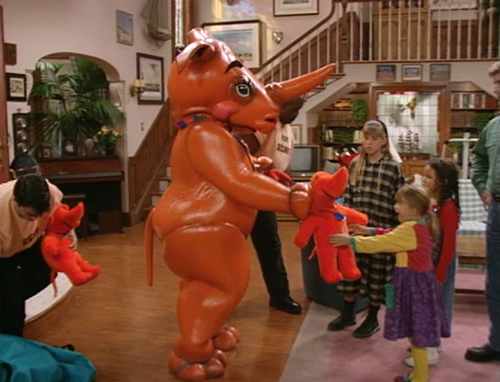 Then he thanks her for reminding him that making kids happy is what he’s all about.  Michelle asks him to dance for her before he leaves and he’s like, sure, kid, it’s not like I didn’t just make a personal appearance at your house after making an incredibly bad business decision just to accommodate you.  Why don’t I do a little dance for you, too? 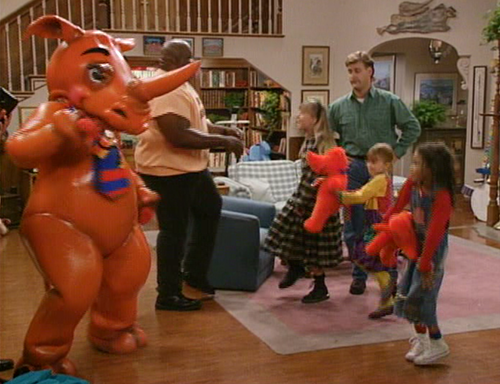