Pre-Credits Gag:  Joey does his Mr. Woodchuck routine for the twins.  We haven’t seen that puppet for like 2 Seasons and I guess I was naive enough to believe that we’d never be subjected to it ever again.  Many wood puns ensue. 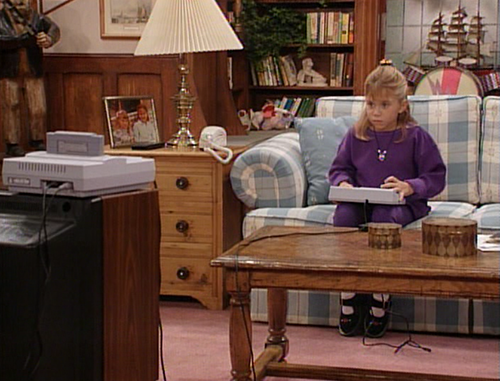 Michelle plays Super Nintendo using a really enormous controller, presumably because it looks better for tv.  I don’t know why she doesn’t just use the Power Glove.  It’s so bad.  Oh wait right that was only for 8-bit Nintendo.  Also, it didn’t even work.  Anyway, the twins watch her suck ass at the game she’s playing and then she asks Jesse to help her with it.  It’s pretty clear from the way that she’s describing the way the game works that the writers of this show have no idea what video games are like.  Jesse helps her find the first magic key in the game and then refuses to return it to her as he continues to play.

As Gia and Stephanie enjoy a pleasant afternoon at the mall food court, Gia orders Stephanie to “check out those guys” and then, after the camera pans over to them, I could only conclude that she said it because she couldn’t believe what a couple of enormous dipshits they were.

For some unknowable reason it turns out that Gia finds these oafish young men attractive and so she beckons them over to herself and her homely friend.  The guys asks them if they’re the girls who jumped onstage at the Nine Inch Nails concert, immediately damaging the bands credibility forever.  Surely there is no greater death knell for a band’s counter-culture status than being referenced on Full House.

The boys sit down to engage further in conversation, one of them splay-legged, the other sitting backwards in his chair, and they ask the girls what high school they go to.  Stephanie almost spills the beans about them being in junior high but Gia is desperate enough to get felt up by some oily delinquents that she forces Stephanie to go along with her story about them attending private school.  When the boys ask which private high school they go to, they just answer, “can’t tell you, it’s private” because I guess it was too hard for them to remember the name of any private high school in the city.

DJ and Kimmie Gibbler roll up on the scene and almost fuck up the whole charade but then Stephanie pulls them aside and begs them to go along with their front.  DJ and Kimmie Gibbler are like, “sure, who gives a shit?” and then they split.  Stephanie goes back to the table and discovers that the boys have left but Gia informs her that they went to go get their car so they could give them a ride home.  Stephanie is hesitant to get into a car with some buffoonish looking boys that she doesn’t even know but then Gia’s like, “I am your token irresponsible friend and I’m always going to pressure you to do stupid shit in order for you to learn a valuable lesson so let’s just cut to the fucking chase already.”

Jesse continues to monopolize Michelle’s video game while she sits on the couch rolling her eyes.  Joey comes in and becomes engaged with the activity, followed by Danny and Becky, all of whom grow hopelessly enthralled within seconds.

Ok, so I’ve seen a lot of crazy nonsense over the course of the past 7 Seasons.  I’ve watched Jesse jump out of a plane that Joey was flying and land in a truck full of tomatoes.  I’ve seen the family get lost on a remote Hawaiian island, only to be rescued by stumbling onto a giant live concert.  I’ve witnessed Stephanie and Michelle accidentally board a plane to New Zealand.  And yet, somehow, I was totally unprepared for how completely fucking insane this sequence of Stephanie and Gia being driven home by those high school boys would be. 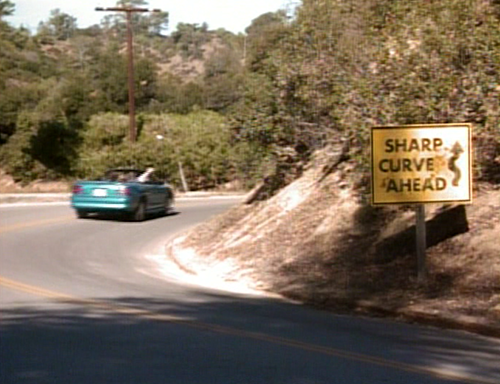 The most striking thing about it is that it looks pretty expensive.  It’s shot outside and involves some pretty intense stunt driving.  So, let’s just ignore that these teenage boys somehow have a convertible sports car and instead focus on the fact that they drive like they’re either on a lot of drugs and/or are experienced stunt drivers.  First they start speeding and making a lot of sharp turns, which is sort of plausible as a thing that irresponsible teenage drivers would do for kicks.  But then they decide that it would be hilarious to drive on the wrong side of the road and almost run directly into a truck. 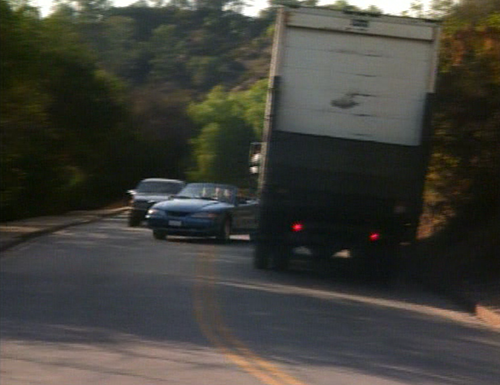 After narrowly avoiding a head-on collision, do they realize the error of their ways?  No, no they do not.  They just exclaim, “awesome!” and high five each other.  Stephanie starts to exhibit some incredibly understandable anxiety about the life threatening driving that’s occurring but Gia just tells her to chill out.  And you know what?  Stephanie decides that she should just listen to Gia and relax, and soon she’s hooting and hollering along with everyone else as they skid across lanes and shit.  I cannot think of a more cartoonish and ridiculous outcome for the accepting-rides-home-from-strange-boys scenario.  It transcends any sort of logical cautionary tale and becomes something utterly ludicrous instead.

Stephanie comes home and tells DJ about all the stupid irresponsible nonsense that she just participated in as though it’s a real cool story and DJ’s like, “bitch, have you lost your mind?”  Stephanie tells her to fuck off and quit raining on her parade and DJ’s like, “fine, whatever.”

DJ interrupts the adults’ obsessive video game affair to tell them that it’s time for dinner, which she apparently prepared herself.  It’s weird how she’s like the responsible matron of the full house all of a sudden.  Everyone eats hastily (even the dog for some reason) so they can get back to their video game and then they all rush off, leaving DJ to do the dishes.

The second that everyone leaves, Gia comes in (never mind that if they hadn’t finished dinner unusually quickly, she would be walking right into the middle of it) and tells Stephanie that their new crazy driver boyfriends are outside and want to take them out for more potentially fatal hijinks.  Stephanie goes into the living room to ask Danny for permission to go out and he’s like, “do whatever the fuck you want.  I’m totally obsessed with this video game right now.”  It seems like there’s some sort of hidden moral in this episode about how playing video games makes you a negligent parent or something but I’m probably just putting more thought into it than any of the writers did.

DJ intervenes, telling Stephanie that there’s no way that she’s going to let her get into that stunt car again and that she’ll narc on her to Danny if she tries to go.  They have a stand-off where Stephanie makes her way towards the door and DJ moves closer to the living room where Danny is and in the end DJ’s willingness to be a snitch overpowers Stephanie’s urge for teenage rebellion.  Stephanie tells Gia that she can’t go and then stomps off up to her room, hella mad.

The video game marathon comes to a head as all of the adults start arguing over who gets to use the controller and then Michelle pulls the cartridge out of the console.  She tells them that they were too immersed in the game even though she was probably just mad that she wasn’t the center of attention (which is pretty much what every conflict involving Michelle is about) and then everyone straight up thanks her for intervening and decides to go back to their regular lives.  Again, I’m not really clear on what they’re trying to say with all of this.  Are we supposed to be learning about why video games are bad for you?  I’m really not sure.  Once they’re gone she starts playing the game again because really all she cared about was having the whole thing all to herself.

DJ goes into Stephanie’s room to have a very special talk and Stephanie’s like, “kiss my ass, you meddling poindexter.”  They start bickering until Danny comes into the room and tells Stephanie that Gia’s mom (who he’s totally been stickin’ it to) called to tell him that Gia was in a car accident.  He asks if she was supposed to be in the car, too, and DJ tells him that Stephanie decided not to go because the boys were irresponsible drivers.  Danny tells Stephanie that he’s proud of her for having such good judgement and then hugs her before abruptly leaving the scene.

Stephanie apologizes to DJ because she’s been such a stupid asshole and then DJ tell her about how she and Kimmie Gibbler stayed out all night on Halloween when they were 13 because they were once stupid assholes, too.  The music comes on as DJ tells Stephanie that she’ll eventually acquire a better meter for when something’s a bad idea and then they hug.  Stephanie then tells DJ that she feels like a piece of shit for lying to Danny about why she didn’t get into the car with those boys and decides that she’d better tell him, which is kind of great because it’s totally going to get DJ in trouble because she’s the one who lied to him.  Take that, DJ!